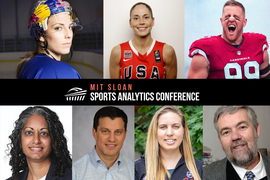 Fairness is part of the promise of sports analytics. By judging an athlete’s performance through good data — as opposed to reputation, image, or outworn clichés — analytics creates the possibility that people can be judged more consistently on merit than often occurs elsewhere in life.

But that promise of fairness only goes so far in a sports world shaped by the same social forces as everything else: Men’s sports have traditionally commanded more resources than women’s sports, including access to data, and the analytics industry has not employed many women or people of color.

The 15th annual MIT Sloan Sports Analytics Conference (SSAC), held online April 8 and 9, placed these issues in the middle of its 2021 agenda. The industry-leading event, a high-profile yearly gathering hosted by the MIT Sloan School of Management, featured numerous panels and speakers focused on the crossroads of sports and society.

That emphasis follows a year of social change and protest, but it’s also borne out by viewership numbers. For instance, across all sports, viewership on television has been almost uniformly down during the Covid-19 pandemic — but, for the women’s NCAA basketball Final Four earlier this month, the semifinal ratings were up 22 percent compared to 2019, and the title game’s ratings were up 11 percent.

And at a time when sports executives and sponsors have fretted over athlete activism possibly conflicting with fan sensibilities, some conference participants offered that women’s sports are better-positioned to thrive through turbulence. WNBA star Sue Bird, for one, observed that women have long had to engage in battles for equal treatment and fair pay, meaning that being a high-flying female professional athlete has often necessitated having an activist’s outlook.

“I think our fanbase already knew what we were about,” said Bird, referring to the long-time embrace of social issues by many of the sport’s stars. She added: “It pays, metaphorically and literally, to be authentic.”

Whatever gains have been made, equity issues remain ever-present in sports, as evidenced by a controversy a few weeks ago over a strikingly substandard weight room provided for the women’s teams in the NCAA basketball tournament — itself a topic of conversation at SSAC.

“I don’t think women coming from the college basketball world were surprised by that,” said Sonia Raman, the former long-time women’s basketball coach at MIT. “At the NCAA level, the student-athlete experience, there needs to be parity in that experience.”

But equity in sports does look a bit different compared to even a couple years ago. Last fall, Raman accepted an assistant coach job with the NBA’s Memphis Grizzlies, in good part because of her reputation for intense preparation and openness to analytics, something she would share with her players at MIT.

“Analytics never gives you a cut and dried answer,” said Raman. “It might make you lean one way or another.” At MIT, she added, the coaching staff’s attitude toward metrics was, “Let’s have a conversation about it. We’d get to that point with our players where there was such a high level of trust, we could include them in the decisions, too.”

Players today increasingly say they are receptive to analytics — and not just marginal athletes looking for an edge to make a roster, but major stars.

“Hockey is so dynamic, I think there are endless opportunities [to find] things to measure,” said Hilary Knight, superstar of U.S. women’s hockey — and part of an all-female panel on hockey analytics at SSAC, something the sport’s old hands might have found mind-bending a few years ago.

J.J. Watt, the star defensive end of the NFL’s Arizona Cardinals, suggested that players will buy into analytics-based decisions — like aggressively going for it on fourth downs in football — as long as coaches are consistently committed to such tactics.

“If you’re going to believe the analytics and be an analytics team, you have to be an analytics team 100 percent of the time,” said Watt, making his first appearance at SSAC. If a team reverses course midseason and starts punting or kicking field goals more on the fourth down, he noted, “Then the players start to say, okay, what are we doing here?”

There are plenty of questions sports analysts are still trying to understand better, of course.

On the other hand, noted Andrew Friedman, president of baseball operation for the World Series champion Los Angeles Dodgers, baseball managers are making decisions by the numbers much more often than they used to: “Fifteen years ago you saw a lot more bad bets happening a lot more frequently,” he noted.

While demonstrating the evolving trends in analytics, the Sloan conference also offers historical perspective. The SSAC baseball panel this year included pioneering analyst Bill James, whose annual “Baseball Abstract” book, published from 1977 to 1988, brought “sabermetrics,” as he then called systematic baseball analysis, to a mainstream national audience for the first time.

Regarding the analytics boom, James said, a bit modestly, “I’ve always been given more credit” than is merited. He added: “I absolutely never envisioned to any extent whatsoever that sabermetrics might come to have the influence that it has had. That was a great shock to me, and still is every day.”

For a younger generation, though, there is no shock involved in using analytics — and if current trends continue, that should apply to teams of any gender, and at any level of sports.