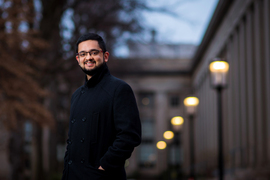 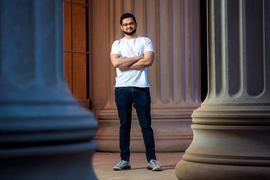 ↓ Download Image
Caption: “It’s interesting to think about how much I’ve changed as I walk down the same path I took to class as a first-year in 2010,” says Pai.
Credits: Image: Gretchen Ertl

Caption:
“It’s interesting to think about how much I’ve changed as I walk down the same path I took to class as a first-year in 2010,” says Pai.
Credits:
Image: Gretchen Ertl

“I grew up with asthma as a kid, so bad air quality holds a visceral significance for me,” says Sidhant (Sid) Pai ’14, who spent much of his childhood in Pune, India. Located about 90 miles southeast of Mumbai, the city’s population has mushroomed over the past few decades, creating significant waste management concerns and poor air quality. Witnessing these unintended consequences of development and urbanization has shaped Pai’s interests in environmental engineering — first as an undergraduate at MIT and now as a graduate student.

“I’ve been fortunate to live in areas with relatively good air quality, but air pollution results in over a million premature deaths in India every year, heavily impacting under-served communities that live in the most polluted regions,” he says. “That’s what makes studying regional air quality in India an important and potentially impactful space.” Pai’s doctoral work is broadly motivated by his passion for human-centered environmental problem-solving.

That passion inspired him to found a social enterprise project, called Protoprint, in Pune after he finished his bachelor’s degree at MIT in 2014. The organization works collaboratively with a waste-picker cooperative, using low-cost and decentralized technology interventions to upcycle waste plastic. Protoprint provides a market-driven solution to augment waste-picker incomes while also increasing profitable recycling avenues for the city.

Pai is particularly interested in exploring translational science related to air quality and climate. “I tend to be pretty scattered in my interests,” he says laughing, “but I’m generally motivated by a sense that I’m contributing to a tangible problem that people actually care about — something that I can intuitively validate as important. I knew I wanted to work on air pollution and climate issues even as an undergrad, but felt like I needed to better understand the science if I was interested in contributing to solutions.”

Pai returned to MIT in 2017 to begin his doctoral work in civil and environmental engineering. Informed by his “fire hose” experience as an undergraduate, though, he has tried to embrace a more sanguine perspective as an MIT graduate student.

“Coming back to MIT was nostalgic!” he says, “I was happy to be back, even though the transition to being a student again was challenging. To be honest, I was pretty burnt out from the [post-undergraduate] work that I was doing in India, which was challenging in a whole different way,” he explains. “Working through p-sets and exams are stressful — don’t get me wrong — but it’s not as stressful as when you’re trying to run an organization and have people depending on you. It was almost nice to be able to just focus on my PhD and work on myself. That said, I think my experiences with Protoprint helped provide some useful perspective while I was navigating hurdles as a junior grad student, and they continue to help center me now when I get anxious or stressed.”

Now in his fifth year, Pai performs his graduate research under the guidance of Professor Colette Heald in the Atmospheric Chemistry and Composition Modeling Group. The lab focuses broadly on studying atmospheric chemistry through the use of community models — complex and collaborative numerical models that simulate atmospheric pollutants and their interactions. Hundreds of scientific groups rely on such models for their research, and their simulations often form the basis for far-reaching policy decisions on air quality management and climate change mitigation.

An important aspect of Pai’s doctoral work focuses on validating and constraining these models with real-world data using satellite retrievals, observations from research aircraft, and earth-surface measurements. He is particularly interested in research questions that can inform real-world decisions for policymakers. Much of his work with the Heald group has focused on understanding an important class of particulate pollutants called secondary aerosols.

“It’s not always practical to regulate pollutant emissions across the board. A more constructive framing might be to determine the subset of regulations and incentives that most effectively move the needle,” he explains. Secondary aerosols, the class of pollutant Pai studies, are formed in the atmosphere from primary pollutants interacting with each other. The nonlinear complexities governing their atmospheric fates mean that different regions might require different kinds of regulations to limit these harmful pollutants. “By adding to our understanding of these secondary species, we contribute to a larger body of literature that helps policymakers improve air quality in their region.”

Growing up at MIT

The social impact ecosystem at MIT has played a formative role in Pai’s trajectory through the Institute and beyond. As an undergraduate, he worked on multiple projects with MIT D-Lab, focused on low-cost technology interventions and community-led design in under-served communities. As a graduate student, Pai works part-time at the PKG Center, analyzing student representation and outcomes in experiential learning programs and developing an online portal for internal decision-making.

In contrast to his life as an undergraduate, Pai has tried to pay more attention to his health as a graduate student, eating better and exercising more often. He plays socially distanced tennis with others in his department (“I’ve been trying to work on my backhand for months!”), and he’s developed small rituals that help him clear his mind as he navigates the inevitable stressors of graduate school. One such habit is taking long walks around campus, which is full of memories for the 28-year-old, given that he has called MIT home for eight years now.

“It’s interesting to think about how much I’ve changed as I walk down the same path I took to class as a first-year in 2010. I’m a very different person than I was when I first got here at age 18! It’s been complicated at times, and there are things about the Institute that I would like to see change, but I am very thankful to have had the opportunity to grow and develop at a place like MIT,” he says.

With graduation about a year away, Pai is looking toward his future and considering a variety of careers connected to science policy and stakeholder-engaged research. As for his next home, he now has two continents to consider. “At this point, I’m equally comfortable in both places,” he says. “I’m also often equally uncomfortable in both places,” he adds, chuckling. “I don’t know what my next steps will be, and I’m still very much in the process of figuring that out, but I’ve recently gotten more interested in developing simple and accessible tools for air-quality and climate decision-making.”

Whatever direction he chooses, Pai will continue to view his interests through the lens of his real-world sensibilities.

A celebration of community and research accomplishments

There’s something in the air