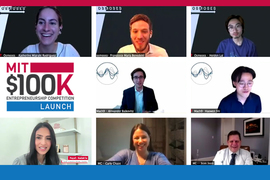 In America’s quest to slash greenhouse gas emissions, many have cited the chemical industry as one of the hardest to decarbonize. It’s a significant roadblock: Chemical separation alone is responsible for up to 15 percent of the U.S.’s total energy usage.

Osmoses, a startup trying to dramatically increase the efficiency of chemical separations, got a major boost Thursday when it won the MIT $100K Entrepreneurship Competition. The company has developed a molecular filtration solution containing tiny channels that can be precisely sized to separate even the smallest molecules. The company claims its membranes can form channels that are 1/100,000 the width of a human hair, allowing the separation of molecules that differ in size by a mere fraction of an angstrom — less than the size of an atom.

“This is one of the greatest challenges of the century for our society, but also one of the biggest opportunities for companies that can innovate in this space,” Francesco Maria Benedetti, a postdoc at MIT, said in the winning pitch. The company is also led by PhD candidate Katherine Mizrahi Rodriguez ’17, Zachary P. Smith, the Joseph R. Mares Career Development Professor of Chemical Engineering at MIT, and Holden Lai, a postdoc at the University of Pennsylvania and former researcher in Smith’s lab.

Many chemical separation processes, such as distillation, use huge amounts of energy in the form of heat. Membrane filtration offers a promising alternative form of separation, but Osmoses says most membranes today have poor performance, leading to low adoption rates among chemical plants and higher operating costs.

Osmoses’ membranes come in a module that fits in existing separation systems. The company has tested its lab prototype in industrial-like environments, including in high-pressure, variable temperature conditions. The company says its results show a marked improvement over existing membrane filtration technologies.

“We’ve completely redesigned the materials these membranes are made of, lowering the energy consumption to a minimum and generating unprecedented performance,” Benedetti said.

The company is starting by targeting gas and vapor separations in the traditional and renewable natural gas processing space. Osmoses says by switching to its solution, companies in the market can reduce product loss by 85 percent, generating added fuel that could power 7 million additional homes in the U.S. for a year.

The company will use the prize money to purchase equipment and scale its prototype later this year. Next year, it hopes to test an early version of its product with potential customers.

Osmoses’ first customers will be natural gas plants that produce hundreds of millions of standard cubic feet of gas per day. The team believes it can reduce up to 1 million tons of carbon dioxide emissions from each plant of that size.

The MIT $100K is MIT’s largest entrepreneurship competition. It began in 1989 (with a much smaller grand prize value) and is organized by students with support from the Martin Trust Center for MIT Entrepreneurship and the MIT Sloan School of Management. Each team must include at least one current MIT student.

The second place, $25,000 prize went to Mach 9, which is building a suite of tools to help companies locate and analyze underground utilities.

“We’re helping you look at what’s underground right now by creating the Google Maps for subsurface information,” said CEO Alex Baikovitz. “We’re making subsurface mapping as easy as driving a car through the city on a nice summer day — not like right after a Red Sox game.”

Baikovitz says many companies currently rely on painted lines to locate underground utilities, an error-prone solution that leads to billions of dollars in losses.

Mach 9 is developing a digital visualization tool to help utility locators interpret field data and save their results in the cloud for future reference. The solution automatically interprets radar data in real-time without an internet connection. It is also building a complementary tool to simplify ground surveys for large-scale construction projects. The software integrates with commonly used design and mapping tools in the industry.

“We’re creating geospatial postprocessing software that just makes sense and is intuitive,” Baikovitz said. “We create 3-D models of the subsurface environment, where we can overlay ground penetrating radar data for interpretation. We can show a digital twin of utilities identified by the Mach 9 system.”

Mach 9 is already in negotiations with the largest utility locating company in the U.S. and is collecting over 1,000 miles of ground-penetrating radar data from surveying firms. The company has also already acquired over $250,000 worth of mapping equipment to construct a proof of concept. It plans to make its first sales in 2022.

In the future, the Mach 9 team plans to offer underground mapping solutions in agriculture and mining. It estimates subsurface mapping to be a $90 billion industry.

The competition was the culmination of a process that began in the winter with more than 80 applicants from all five of MIT’s schools pitching their ideas. Thursday’s winning teams were two of eight finalists. The other finalist teams were:

Azeki Road, which is building technology solutions to help consumer brands in Africa scale around the world;

UltraNeuro, which is building a wearable ultrasound transducer to activate damaged nerves and reduce pain caused by a condition called peripheral neuropathy;

Resolute, which is creating a line of natural sunscreens that is suited for people of all skin tones;

Synthera Health, which is developing a testing, analytics, and iron supplement platform to help people maintain optimal iron levels in their blood; and

Volt, which is creating a marketplace for companies to buy and sell printed circuit boards, reducing procurement times and costs.

Bloomberg reporter Will Mathis spotlights Osmoses, an MIT startup that has “created a membrane material thinner than human hair to reduce carbon emissions from industrial processes such as natural gas production.” CEO and postdoc Francesco Maria Benedetti explains that “we envision applying our technology to increase the sustainability of existing infrastructure."