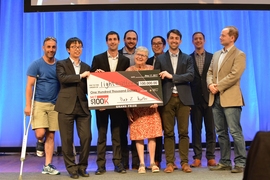 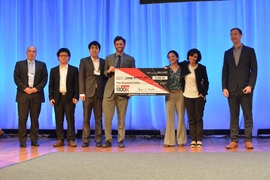 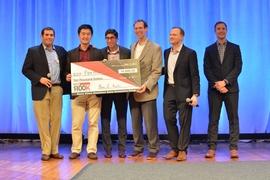 Devices such as Apple’s Siri and Amazon’s Alexa, as well as self-driving cars, all rely on artificial intelligence algorithms. But the chips powering these innovations, which use electrical signals to do computations, could be much faster and more efficient.

Two other winners took home cash prizes from the annual competition, now in its 28th year. Winning a $5,000 Audience Choice award was change:WATER Labs, a team of MIT researchers and others making toilets that can condense waste into smaller bulk for easier transport in areas where people live without indoor plumbing. PipeGuard, an MIT team developing a sensor that can be sent through water pipes to detect leaks, won a $10,000 Booz Allen Hamilton data prize.

The competition is run by MIT students and supported by the Martin Trust Center for MIT Entrepreneurship and the MIT Sloan School of Management.

Founded out of MIT, Lightmatter has developed a new optical chip architecture that could in principle speed up artificial-intelligence computations by orders of magnitude.

In artificial intelligence, traditional chips rely on electrical signals that conduct millions of calculations using transistors (switches) to simulate a neural network that can produce an output. Lightmatter’s chip uses a completely different architecture that is more similar to the architecture of a real biological neural network. In addition, it uses light, instead of electrons, as a medium to carry the information during computing.

The team has already built a prototype to carry out some simple speech recognition tasks.

The chips could be used by companies to develop faster and more sophisticated artificial-intelligence models. Consumers could see, for instance, smarter models of Alexa or Siri, or autonomous cars that compute faster, using less energy.

With the prize money, the team will travel to meet with potential customers, rent its first office space, and visit manufacturers. The competition also helped the team develop a detailed business plan, Harris told MIT News. “Our business plan was passed around to quite a number of judges before we were even vetted to get in here,” he said. “We were able to iterate on our understanding of how this thing is going to work, who we’re going to sell it to, how much money we’re going to make, and all the details of a business. Before this, we weren’t really there.”

In PipeGuard’s pitch, Jonathan Miller, an integrated design and management student, and You Wu, a mechanical engineering PhD student, showcased Robot Daisy, a palm-sized bot wearing a sensor “skirt.” A worker puts the device into one end of a water pipe and collects it at another end. If Daisy passes a leak while flowing through the pipe, the small amount of pressure pulls on robot’s “skirt,” collecting data on the size of the leak. Data from Daisy is used to pinpoint leaks within a couple of feet. Traditional methods give only a general area of a potential leak.

“Moreover, Daisy can detect leaks too small for current technology,” Wu said. “We can find leaks when they’re really small, in their early stages, way before a pipe bursts.” Using that information, the team can predict which pipes will burst, and when.

Diana Yousef, a research associate at D-Lab, and Huda Elasaad, a technical research assistant in D-Lab and the Department of Mechanical Engineering, pitched for change:Water Labs, which is developing a portable toilet that shrinks waste for easier removal.

Water makes up the bulk of human waste. The team’s toilet collects solid and liquid waste in a small pouch made of a novel membrane. The membrane passively, rapidly vaporizes 95 percent of the waste’s liquid, releasing pure water vapor. This can be used in the many parts of the world that have off-line sewerage, meaning people lack access to indoor plumbing and rely on expensive sewerage removal.

“While all off-line sewerage requires collection and removal, this is usually frequent and costly. But by so drastically shrinking on-site sewerage volumes on a day-to-day basis, our toilets cut those costs in half and allow for unprecedented scalability,” Yousef said. About 40 cents worth of the material can cut waste of 20 people, according to the team.

The $100K Entrepreneurship Competition consists of three independent contests: Pitch, held in February; Accelerate, held in March; and the Launch grand finale, held last night. Winner of the Pitch competition was High Q Imaging, which reduces the cost of MRI machines by 10 times with advanced algorithms and innovative hardware. The Accelerate contest winner was NeuroSleeve, a team developing an arm brace that detects carpal tunnel syndrome in its early stages, which also competed last night.

Since its 1990 debut, the MIT $100K Entrepreneurship Competition has facilitated the birth of more than 160 companies, which have gone on to raise $1.3 billion in venture capital and build $16 billion in market capitalization. More than 30 of the startups have been acquired by major companies, such as Oracle and Merck, and more 4,600 people are currently employed by former competing companies.

In his welcoming remarks, Bar Kafri, an MBA student and managing director of the MIT $100K Entrepreneurship Competition, who has been involved with the competition for many years, told the teams to embrace the process of competing because it walks them through all the intricacies of starting a company.

Noting that people often ask why he always gets involved with the competition, Kafri said, “It’s the same [reason] that brought me all the way from Israel to MIT. This Institution is a shining light of innovation, a light that guides science and humanity in a sea of uncertainty. The $100K competition is the lighthouse that helps carry this light high above and enables it to be seen from afar. I have the privilege of being the lighthouse keeper, fostering this light.” He added: “Keep shining this light.”

Keynote speaker was Jason Jacobs, founder and CEO of Runkeeper, a popular fitness app that sold to Japanese sportswear giant Asics in 2016.