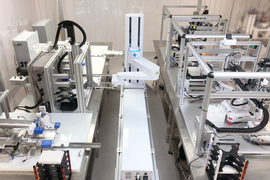 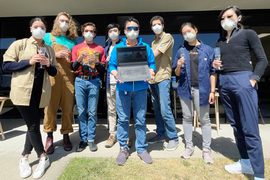 Now Multiply Labs, which was founded by Fred Parietti PhD ’16 and former visiting PhD at MIT Alice Melocchi, is hoping to bring the speed and precision of its robots to a new type of advanced treatment.

In a recently announced project, Multiply Labs is developing a new robotic manufacturing platform to ease bottlenecks in the creation of cell therapies. These therapies have proven to be a powerful tool in the fight against cancer, but their production is incredibly labor intensive, contributing to their high cost. CAR-T cell therapy, for example, requires scientists to extract blood from a patient, isolate immune cells, genetically engineer those cells, grow the new cells, and inject them back into the patient. In many cases, each of those steps must be repeated for each patient.

Multiply Labs is attempting to automate processes that can currently only be done by highly trained scientists, performing some of the most time-consuming tasks of cell therapy production in parallel processes. For instance, the company’s system will contain multiple bioreactors, which are used to grow the genetically modified cells that will be injected back into the patient. Some labs today only use one bioreactor in each clean room because of the specific environmental conditions that have to be met to optimize cell growth. By running multiple reactors simultaneously in a space about a quarter of the size of a basketball court, the company believes it can multiply the throughput of cell therapy production.

Multiply Labs has partnered with global life sciences company Cytiva, which provides cell therapy equipment and services, as well as researchers at the University of California San Francisco to bring the platform to market.

Multiply Labs’ efforts come at a time when demand for cell therapy treatment is expected to explode: There are currently more than 1,000 clinical trials underway to explore the treatment’s potential in a range of diseases. In the few areas where cell therapies are already approved, they have helped cancer patients when other treatment options had failed.

“These [cell therapy] treatments are needed by millions of people, but only dozens of them can be administered by many centers,” Parietti says. “The real potential we see is enabling pharmaceutical companies to get these treatments approved and manufactured quicker so they can scale to hundreds of thousands — or millions — of patients.”

Multiply Labs’ move into cell therapy is just the latest pivot for the company. The original idea for the startup came from Melocchi, who was a visiting PhD candidate in MIT’s chemical engineering department in 2013 and 2014. Melocchi had been creating drugs by hand in the MIT-Novartis Center for Continuous Manufacturing when she toured Parietti’s space at MIT. Parietti was building robotic limbs for factory workers and people with disabilities at the time, and his workspace was littered with robotic appendages and 3-D printers. Melocchi saw the machines as a way to make personalized drug capsules.

Parietti developed the first robotic prototype in the kitchen of his Cambridge apartment, and the founders received early funding from the MIT Sandbox Innovation Fund Program.

Today Multiply Labs’ robotic clusters are being deployed on the production floors of leading pharmaceutical companies. The cloud-based platforms can produce 30,000 drug capsules a day and are modular, so companies can purchase as many systems as they need and run them together. Each system is contained in 15 square feet.

“Our goal is to be the gold standard for the manufacturing of individualized drugs,” Parietti says. “We believe the future of medicine is going to be individualized drugs made on demand for single patients, and the only way to make those is with robots.”

The move to cell therapy comes after Parietti’s small team of mostly MIT-trained roboticists and engineers spent the last two years learning about cell therapy production separately from its drug capsule work. Earlier this month, the company raised $20 million and is expecting to triple its team.

Multiply labs is already working with Cytiva to incorporate the company’s bioreactors into its platform.

“[Multiply Labs’] automation has broad implications for the industry that include expanding patient access to existing treatments and accelerating the next generation of treatments,” says Cytiva’s Parker Donner, the company’s head of business development for cell and gene therapy.

Multiply Labs aims to ship a demo to a cell therapy manufacturing facility at UCSF for clinical validation in the next nine months.

“It really is a great adventure for someone like me, a physician-scientist, to interact with mechanical engineers and see how they think and solve problems,” says Jonathan Esensten, an assistant adjunct professor at UCSF whose research group is being sponsored by Multiply Labs for the project. “I think they have complementary ways of approaching problems compared to my team, and I think it’s going to lead to great things. I’m hopeful we’ll build technologies that push this field forward and bend the cost curve to allow us to do things better, faster, and cheaper. That’s what we need if these really exciting therapies are going to be made widely available.”

“The beauty of the Multiply Labs concept is that it’s modular,” Esensten said. “You could imagine a robot where there are no bottlenecks: You have as much capacity as you need at every step, no matter how long it takes. Of course, there are theoretical limits, but for a given footprint the robot will be able to manufacture many more products than we could do using manual processes in our clean rooms.”

Parietti thinks Esensten’s lab is a great partner to prove robots can be a game changer for a nascent field with a lot of promise.

“Cell therapies are amazing in terms of efficacy,” Parietti says. “But right now, they’re made by hand. Scientists are being used for manufacturing; it’s essentially artisanal. That’s not the way to scale. The way we think about it, the more successful we are, the more patients we help.”