MIT engineers test an idea for a new hovering rover 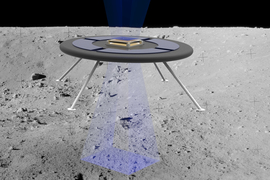 ↓ Download Image
Caption: MIT aerospace engineers are testing a concept for a hovering rover that levitates by harnessing the moon’s natural charge. This illustration shows a concept image of rover.
Credits: Courtesy of the researchers 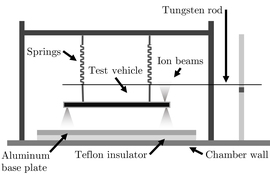 ↓ Download Image
Caption: This image shows the diagram of the test setup. The design uses tiny ion beams to charge up the vehicle and the surface underneath, with little power needed. Such an ion boost could be strong enough to levitate a 2-pound vehicle on the moon and large asteroids.
Credits: Courtesy of the researchers

Caption:
MIT aerospace engineers are testing a concept for a hovering rover that levitates by harnessing the moon’s natural charge. This illustration shows a concept image of rover.

Caption:
This image shows the diagram of the test setup. The design uses tiny ion beams to charge up the vehicle and the surface underneath, with little power needed. Such an ion boost could be strong enough to levitate a 2-pound vehicle on the moon and large asteroids.
Credits:
Courtesy of the researchers

Aerospace engineers at MIT are testing a new concept for a hovering rover that levitates by harnessing the moon’s natural charge.

Because they lack an atmosphere, the moon and other airless bodies such as asteroids can build up an electric field through direct exposure to the sun and surrounding plasma. On the moon, this surface charge is strong enough to levitate dust more than 1 meter above the ground, much the way static electricity can cause a person’s hair to stand on end.

Engineers at NASA and elsewhere have recently proposed harnessing this natural surface charge to levitate a glider with wings made of Mylar, a material that naturally holds the same charge as surfaces on airless bodies. They reasoned that the similarly charged surfaces should repel each other, with a force that lofts the glider off the ground. But such a design would likely be limited to small asteroids, as larger planetary bodies would have a stronger, counteracting gravitational pull.

The MIT team’s levitating rover could potentially get around this size limitation. The concept, which resembles a retro-style, disc-shaped flying saucer, uses tiny ion beams to both charge up the vehicle and boost the surface’s natural charge. The overall effect is designed to generate a relatively large repulsive force between the vehicle and the ground, in a way that requires very little power. In an initial feasibility study, the researchers show that such an ion boost should be strong enough to levitate a small, 2-pound vehicle on the moon and large asteroids like Psyche.

“We think of using this like the Hayabusa missions that were launched by the Japanese space agency,” says lead author Oliver Jia-Richards, a graduate student in MIT’s Department of Aeronautics and Astronautics. “That spacecraft operated around a small asteroid and deployed small rovers to its surface. Similarly, we think a future mission could send out small hovering rovers to explore the surface of the moon and other asteroids.”

The team’s results appear in the current issue of the Journal of Spacecraft and Rockets. Jia-Richards’ co-authors are Paulo Lozano, the M. Alemán-Velasco Professor of Aeronautics and Astronautics and director of MIT’s Space Propulsion Lab; and former visiting student Sebastian Hampl, now at McGill University.

The team’s levitating design relies on the use of miniature ion thrusters, called ionic-liquid ion sources. These small, microfabricated nozzles are connected to a reservoir containing ionic liquid in the form of room-temperature molten salt. When a voltage is applied, the liquid’s ions are charged and emitted as a beam through the nozzles with a certain force.

Lozano’s team has pioneered the development of ionic thrusters and has used them mainly to propel and physically maneuver small satellites in space. Recently, Lozano had seen research showing the levitating effect of the moon’s charged surface on lunar dust. He also considered the electrostatic glider design by NASA and wondered: Could a rover fitted with ion thrusters produce enough repulsive, electrostatic force to hover on the moon and larger asteroids?

To test the idea, the team initially modeled a small, disk-shaped rover with ion thrusters that charged up the vehicle alone. They modeled the thrusters to beam negatively charged ions out from the vehicle, which effectively gave the vehicle a positive charge, similar to the moon’s positively charged surface. But they found this was not enough to get the vehicle off the ground.

“Then we thought, what if we transfer our own charge to the surface to supplement its natural charge?” Jia-Richards says.

By pointing additional thrusters at the ground and beaming out positive ions to amplify the surface’s charge, the team reasoned that the boost could produce a bigger force against the rover, enough to levitate it off the ground. They drew up a simple mathematical model for the scenario and found that, in principle, it could work.

Based on this simple model, the team predicted that a small rover, weighing about two pounds, could achieve levitation of about one centimeter off the ground, on a large asteroid such as Psyche, using  a 10-kilovolt ion source. To get a similar liftoff on the moon, the same rover would need a 50-kilovolt source.

“This kind of ionic design uses very little power to generate a lot of voltage,” Lozano explains. “The power needed is so small, you could do this almost for free.”

To be sure the model represented what could happen in a real environment in space, they ran a simple scenario in Lozano’s lab. The researchers manufactured a small hexagonal test vehicle weighing about 60 grams and measuring about the size of a person’s palm. They installed one ion thruster pointing up, and four pointing down, and then suspended the vehicle over an aluminum surface from two springs calibrated to counteract Earth’s gravitational force. The entire setup was placed within a vacuum chamber to simulate the airless environment of the moon and asteroids.

The researchers also suspended a tungsten rod from the experiment’s springs, and used its displacement to measure how much force the thrusters produced each time they were fired. They applied various voltages to the thrusters and measured the resulting forces, which they then used to calculate the height the vehicle alone could have levitated. They found these experimental results matched with predictions of the same scenario from their model, giving them confidence that its predictions for hovering a rover on Psyche and the moon were realistic.

The current model is designed to predict the conditions required to simply achieve levitatation, which happened to be about 1 centimeter off the ground for a 2-pound vehicle. The ion thrusters could generate more force with larger voltage to lift a vehicle higher off the ground. But Jia-Richards says the model would need revising, as it doesn’t account for how the emitted ions would behave at higher altitudes.

“In principle, with better modeling, we could levitate to much higher heights,” he says.

In that case, Lozano says future missions to the moon and asteroids could deploy rovers that use ion thrusters to safely hover and maneuver over unknown, uneven terrain.

“With a levitating rover, you don’t have to worry about wheels or moving parts,” Lozano says. “An asteroid’s terrain could be totally uneven, and as long as you had a controlled mechanism to keep your rover floating, then you could go over very rough, unexplored terrain, without having to dodge the asteroid physically.”

MIT researchers have proposed a conceptual hovering rover that would use the moon’s static charge to stay airborne, reports Elizabeth Howell for Forbes. “We think a future [moon] mission could send out small hovering rovers to explore the surface of the moon and other asteroids,” says graduate student Oliver Jia-Richards.

MIT researchers have tested the concept for a hovering rover, a spacecraft that could use the moon’s electric field to levitate over its surface, reports Tatyana Woodall for Popular Science. Graduate student Oliver Jia-Richards explains that the team’s idea for a disc-like rover “potentially provides a much more precise and easier way of maneuvering on these rough terrain and low gravity environments.”

MIT researchers have proposed testing a concept for a levitating rover that could operate by using the moon’s electric field, reports Andrew Liszewski for Gizmodo. Liszewski writes that “the researchers believe a levitating rover powered this way could potentially float even higher, or potentially be built heavier with additional scientific instrumentation on board.”

To catch an interstellar visitor, use a solar-powered space slingshot