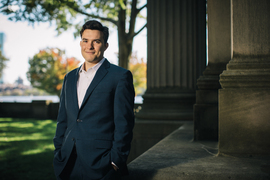 ↓ Download Image
Caption: MIT senior Max Williamson could have chosen a path toward Silicon Valley, but instead he is using his background in computer science to tackle public policy issues in his home state of Delaware and on a global scale. “As engineers, we can and should make meaningful, positive differences in public policy,” he says.
Credits: Image: Jake Belcher

Caption:
MIT senior Max Williamson could have chosen a path toward Silicon Valley, but instead he is using his background in computer science to tackle public policy issues in his home state of Delaware and on a global scale. “As engineers, we can and should make meaningful, positive differences in public policy,” he says.
Credits:
Image: Jake Belcher

During his first year at MIT, Max Williamson felt lost and unsure of his long-term goals. By spring, he faced what felt like a career-altering decision: pursue a coveted summer computer science research position at MIT or return home to Delaware and intern for his senator.

His friends thought he was crazy to pursue public service over a high-paying career in Silicon Valley. However, after working hands-on with local communities in Delaware while also learning the tangible, human impact of policymaking, Williamson knew he made the right choice.

Now a senior majoring in computer science and electrical engineering with a minor in public policy, Williamson sees his technical background and coding skills as important assets in the policy arena. They have equipped him with the tools to tackle big, structural problems with an engineering mindset, and have allowed him to make contributions in a variety of policy areas.

During his summer internship in Senator Chris Coons’ Delaware office, Williamson supported the constituent advocacy team, helping people with everything from filing taxes to avoiding eviction. He was exposed to a wide range of public policy issues in the process, but was particularly struck by a lack of access to computer science education in his hometown.

Recognizing how lucky he had been to receive exposure to computer science through his charter school in Delaware, Williamson wanted to support other students in his home state. Through the PKG Center at MIT, he worked with community centers in the state to start a program dubbed CoDE, teaching young people the fundamentals of computer science. Williamson has also taught computer science in Italy as a part of MIT’s Global Teaching Labs program, instructing students on the basics of JavaScript, HTML, and CSS.

Williamson also used his computer science background when he found himself at the forefront of his county government’s Covid-19 response efforts. He worked as a special projects manager for New Castle County, tasked with overseeing around $8 million in federal and charitable funds, which culminated in the launch of a Covid-19 testing and genomics lab at Delaware State University. His role was to facilitate communication between key players in the operation, such as consultants, lawyers, contractors, and county and university staff. Although he was initially unfamiliar with specific medical science policies and regulations, Williamson’s problem-solving skills helped him to engage with experts, digest a large amount of information, and learn what he needed to know. Over the next several months, he and the team scaled the lab to process thousands of tests each day, which allowed the university to host all of its students for in-person learning last spring.

Williamson has also been involved in electoral politics. After working as a fellow with Massachusetts for Biden in the winter of 2020, Williamson founded MIT for Biden, which mobilized students to vote for his hometown hero. Later, he took the fall semester off from MIT to serve as the data director for Senator Coons’ reelection campaign.

However, while he enjoyed working in politics and on domestic policy issues, Williamson has recently been drawn to tackle problems on a more global scale.

Williamson moved to Washington last summer to work for Coons again, this time as a foreign policy legislative fellow. Soon he found himself drafting letters to cabinet officials, holding meetings with nongovernmental organizations, and preparing Coons for meetings with ambassadors and foreign ministers. He believes his exposure to local social policy problems has helped prepare him to address global development issues. Ultimately, he wants to focus on foreign assistance policy that seeks to remove barriers to people’s fundamental needs, such as access to health care and education.

Williamson has also worked to facilitate conversations and find common ground with his peers at MIT. He is currently the director of outreach for Civic Synergy, an organization that seeks to bring students across political divides together to have meaningful conversations about current political issues. “If I can get students from different ideological camps to come together and learn to hold substantive conversations about the thorny issues my generation faces, then that’s a win for me,” he says.

Williamson sees Civic Synergy as an opportunity to get students interested in public service. He wants to reinforce the connection between STEM-based careers and social impact, showing students in engineering and other STEM-based fields how they can impact social change and policy, even if they don’t realize it. “As engineers, we can and should make meaningful, positive differences in public policy,” he says.

In April 2021, Williamson was named a Truman Scholar, which funds graduate study for students pursuing leadership careers in public service. He hopes to use the scholarship to pursue either law school or a master’s degree in public policy. On either path, he hopes to gain a more thorough academic understanding of the policymaking process before working in government again. In the future, he hopes to use his unique combination of skills and experiences to inform U.S. foreign assistance and national security policy.

Given the opportunities Williamson has been granted by MIT, he now feels a responsibility and a desire to pursue a career in public service. “I have had opportunities that very few people get to have, and I hope to use them to serve others,” he says.