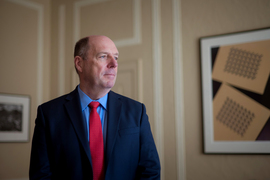 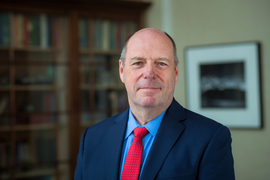 Schmidt, who earned his BS in electrical engineering at RPI in 1981, will assume its presidency on July 1, 2022. He has spent more than 40 years at MIT as a student, faculty member, and administrative leader.

“MIT has been a remarkable home for me,” Schmidt says. “It has allowed me to pursue my research and teaching passions, and has immersed me in an environment of inspiring and dedicated staff, students, and faculty. I’ve been presented with exceptional opportunities to contribute to MIT and beyond.”

In a letter to the MIT community today, President L. Rafael Reif thanked Schmidt for his decades of committed service to MIT.

“Marty is an extraordinary citizen of MIT and one of its most gifted and dedicated servant-leaders,” Reif wrote. “I could not be more grateful for his expert counsel and his enduring friendship.”

Located in Troy, New York, RPI was founded in 1824 to support the “application of science to the common purposes of life.” In the nearly 200 years since, many other technological universities, as well as schools and colleges of applied sciences, have emulated RPI’s model. Today, its 7,900 students take courses in five schools: architecture; management; engineering; humanities, arts, and social sciences; and science.

“When RPI approached me over the summer regarding the presidency, I was not at first convinced that it was a fit for me,” Schmidt says. “However, as I began to consider it, I came to realize that there is really something special about being given the opportunity to lead your undergraduate alma mater. My wife Lyn and I are very excited to return to a campus which we knew very well 40 years ago, and to reacquaint ourselves with the RPI community.”

“I often joke, when asked how long I’ve been at MIT, that I’ve been here my entire adult life,” Schmidt says. “I came to MIT in September 1981 as a 21-year-old graduate student, and never left.”

He earned his MS in 1983 — largely for research conducted at Lincoln Laboratory — and his PhD in 1988, both in electrical engineering and computer science (EECS). A member of the EECS faculty since 1988, Schmidt was director of MIT’s Microsystems Technology Laboratories from 1999 to 2006, and associate provost from 2008 to 2013.

Schmidt has served as provost since 2014; he is also the Ray and Maria Stata Professor of Electrical Engineering and Computer Science. The provost is MIT’s senior academic and budget officer, with overall responsibility for the Institute’s educational programs, as well as for the recruitment, promotion, and tenuring of faculty. As provost, he has worked closely with MIT’s deans to establish academic priorities, and with other members of the Institute’s senior team to manage financial planning and research support. He has also had oversight of MIT’s international engagements.

“When Marty accepted the role of provost in 2014, he was exceptionally well prepared,” President Reif wrote in his letter to the community today. “Calm, thoughtful, optimistic but appropriately cautious, with a nimble mind and an easy, unpretentious manner, he quickly became one of my closest advisors.”

In his eight years as MIT’s provost, Schmidt has led many of the Institute’s efforts to foster an inclusive and well-supported community. He also played a key role in the 2018 creation of the MIT Stephen A. Schwarzman College of Computing, and in the ongoing evolution of edX.

In 2016, Schmidt began a process to reimagine MIT’s approach to building welcoming and inclusive communities. He provided leaders across campus with resources to improve the climate within their academic areas, and undertook a major restructuring of the Institute Community and Equity Office. More recently, he has overseen development of an Institute-wide Strategic Action Plan for Diversity, Equity, and Inclusion (DEI), as well as the Ad Hoc Committee on Arts, Culture, and DEI.

In 2018, Schmidt played a central role in the creation of Schwarzman College. Made possible by a $350 million gift, Schwarzman College represented the most significant organizational change at MIT in 70 years. The college aims to strengthen MIT’s core computer science activities by hiring 25 additional faculty; to bridge disciplines between computer science and other disciplines through recruitment of 25 new joint faculty; and to create a new unit to focus on the social and ethical responsibilities of computing.

Together with the provost of Harvard University, Schmidt has co-chaired the board of edX since 2014. He was deeply involved in the execution of a transformative transaction, announced in June 2021, to spin off part of edX to a commercial partner and use the $800 million proceeds to create a new nonprofit. This new nonprofit, still in development, will support an open-source learning platform and assist learners who are not well-served by current online platforms, through grant-making and partnerships.

A seasoned researcher and entrepreneur

In the 1980s, as a graduate student, Schmidt broadened his horizons beyond his early interest in microelectronics, turning his attention to miniature sensors for use in factories and vehicles. He later conducted research on sensors to detect turbulence.

As an MIT faculty member, Schmidt’s enthusiasm for interdisciplinary collaboration drew him to partner with colleagues outside his own field. Attracted to problems with practical applications, he also found himself working closely with industrial collaborators at 3M, Bosch, and General Motors.

A seasoned inventor and entrepreneur, Schmidt holds more than 30 issued U.S. patents and has played a part in starting seven companies. His entrepreneurship has its roots in the 1990s, when he cultivated an interest in microfluidics. His work to develop miniature chemical reactors gave rise to one startup; two others grew out of microfluidics research involving the manipulation of individual cells in blood.

“Marty embodies an MIT ideal — a scholar at work in the world,” President Reif wrote in his letter today.

President Reif also invited suggestions from members of the MIT community regarding the selection of MIT’s next provost. Input can be sent to provost-search@mit.edu; all correspondence will be treated as confidential.

Provost Martin A Schmidt has been named the 19th president of Rensselaer Polytechnic Institute (RPI),  reports Diverse Issues in Higher Education reporter Jessica Ruf. “MIT has been a remarkable home for me,” Schmidt told Ruf. “It has allowed me to pursue my research and teaching passion, and I’ve been presented with outstanding opportunities.”

MIT Provost Martin Schmidt has been named the next president of Rensselaer Polytechnic Institute (RPI), where he received his undergraduate degree, reports the Associated Press. “Marty is a unifying, visionary leader, and a renowned scholar in Electrical Engineering and Computer Science," said Arthur F. Golden, chair of the Rensselaer Board of Trustees.

The findings could inform the design of new materials such as iridescent windows or waterproof textiles.