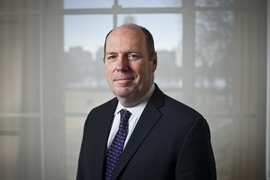 In October 2018, MIT announced the MIT Stephen A. Schwarzman College of Computing, to address the rapid evolution of computing and artificial intelligence, and fuse computing with disciplines throughout the Institute. The timetable is an ambitious one; the college is set to open in September 2019.

Some important milestones have been reached: A new dean has been hired, a building site has been identified, and a wide-ranging celebration event sparked many conversations about the new college. Now, a task force of five working groups is meeting regularly to advance the planning of the college, with guidance from a steering committee that includes Dean of Engineering Anantha Chandrakasan and MIT Faculty Chair Susan Silbey and that is chaired by Provost Martin Schmidt. Centered around key themes, the working groups together comprise more than 100 professors, students, and staff. The themes and their co-chairs are:

Schmidt has described the mission of the new college as having three parts: to advance research in computer science and computing; to bring advanced computational capabilities to disciplines across MIT and, conversely, to bring knowledge from those disciplines to bear on the development of next-generation algorithms by computer scientists; and to make an appreciation of the social implications of technology implicit throughout research and education at the Institute.

The task force is now considering how to erect a college that realizes this trifold mission. Members of the MIT community are encouraged to share input via a related idea bank, and at three community forums with the working group co-chairs on April 17 and 18. MIT News spoke with Schmidt about the path forward to the opening of the new college.

Q: What is the charge for each of the working groups you have convened?

A: The working groups are meeting throughout this semester, both separately and in discussion with each other, to think through the essential elements of the new college and develop ideas to help guide the administration.

One group is thinking about the college’s organizational structure. For example, is this a unit that should have departments, or do you want something that’s a little more agile as fields evolve?

We also have a working group on faculty, which is considering how to ensure that people can successfully work in one department and in the college. We have a lot of faculty who advance computing, but they don’t do it in computer science; how can they participate in and contribute to the college?

The education working group is thinking about what kind of degrees we should have and how should those degrees be administered. If a department wants to offer a joint program with computer science, how do we make it so?

We have a group that’s thinking about the infrastructure elements; we have people clamoring for cloud computing, for example. So, how is that going to work? Is there way to develop an infrastructure into a whole that’s greater than the sum of its parts?

The last working group is thinking about the social implications of technology, and how we make consideration of that implicit in everything we do. What does the curriculum look like for our students? What are the implications for our research agenda?

The most important thing I feel like we’re doing to advance the college right now is having more than 100 people vigorously debating these things. We’d love to have even more people in these groups, but we’ve worked hard to have a fairly broad representation.

Q: What is the intended outcome of these discussions? What will happen between now and the arrival of Dean Huttenlocher?

A: Each working group will produce a report that’s a summary of their deliberations, and those documents will be shared with the MIT community, which we hope will spark further input.

We’ve populated the working groups with people from across the Institute, and they are entering the process from very different perspectives. One of the challenges is that the college is built on three promises, and nearly everybody on the campus sees a promise that matters a lot to them. At the end of this process, at a minimum what we’ll have is 100 people who have congealed at some level, and we’ll be able to identify the key areas of divergence. For example, when we get somebody from EECS and somebody from political science and somebody from physics in the same room, and they all envision the college differently, if we can hash that out and understand those differences, we’ll have a strong foundation to build on.

I fully expect that as we go down this path we’re going to be making midcourse corrections. We’re going to realize that our path to achieving our end goal now looks a bit different. Having that flexibility to pivot is going to be really important.

On the hiring side, we’ve committed to 50 new faculty positions to be filled over the next five years, and I hope by September that we’ve identified the first 10. Half will be in computer science, so EECS has been asked to look for those new five. The other five will be bridge faculty, so I’ve been in conversation with each school dean to think about who they might bring forward as a bridge hire.

Q: Despite differing perspectives, are there also points of agreement? What are some of the common themes that have emerged from the working groups’ discussions so far?

A: There are two related things that people are really excited about and want to hold us accountable to. One is creating a culture and climate that make it the best college to realize the vision we’ve articulated. We need to be really intentional about this and start thinking about it now. That’s true for diversity and inclusion as well. What can we do that’s really deliberate, as we’re thinking about this from the beginning, to ensure that the college is as diverse and inclusive as we can possibly make it?

Innovating at the speed of light

The future of education in a world of pervasive computing