Mark Vogelsberger: Simulating galaxy formation for clues to the universe

“In astrophysics, we have only this one universe which we can observe,” the physics professor says. “With a computer, we can create different universes, which we can check.”
Jennifer Chu | MIT News Office
Publication Date:
Press Inquiries 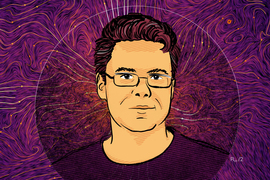 ↓ Download Image
Caption: MIT Associate Professor Mark Vogelsberger has spent much of his career recreating the birth and evolution of hundreds of thousands of galaxies, starting from the very earliest moments of the universe, on up to the present day. In this portrait illustration, the background shows the topology of halo-scale gas flows around a single TNG50 system.
Credits: Credit: Jose-Luis Olivares, MIT. Background figure courtesy of IllustrisTNG Collaboration.

Caption:
MIT Associate Professor Mark Vogelsberger has spent much of his career recreating the birth and evolution of hundreds of thousands of galaxies, starting from the very earliest moments of the universe, on up to the present day. In this portrait illustration, the background shows the topology of halo-scale gas flows around a single TNG50 system.
Credits:
Credit: Jose-Luis Olivares, MIT. Background figure courtesy of IllustrisTNG Collaboration.

For all its brilliant complexity, the Milky Way is rather unremarkable as galaxies go. At least, that’s how Mark Vogelsberger sees it.

“Our galaxy has a couple features that might be a bit surprising, like the exact number of structures and satellites around it,” Vogelsberger muses. “But if you average over a lot of metrics, the Milky Way is actually a rather normal place.”

He should know. Vogelsberger, a newly tenured associate professor in MIT’s Department of Physics, has spent much of his career recreating the birth and evolution of hundreds of thousands of galaxies, starting from the very earliest moments of the universe on up to the present day. By harnessing the power of supercomputers all over the world, he has produced some of the most precise  theoretical models of galaxy formation, in mesmerizing detail.

His simulations of the universe have shown that galaxies can evolve into a menagerie of shapes, sizes, colors, and clusters, exhibiting a clear diversity in the galaxy population, which matches with what astronomers have observed in the actual universe. Using the simulations as a sort of computational movie reel, scientists can rewind the tape to study in detail the physical processes that underlie galaxy formation, as well as the distribution of dark matter throughout the universe.

At MIT, Vogelsberger is continuing to refine his simulations, pushing them farther back in time and over larger expanses of the universe, to get a picture of what early galaxies may have looked like. With these simuilations, he is helping astronomers determine what sort of structures next-generation telescopes might actually be able to see in the early universe.

Vogelsberger grew up in Hackenheim, a small village of about 2,000 residents in western Germany, where nearly every night was a perfect night for stargazing.

“There was very little light pollution, and there was literally a perfect sky,” he recalls.

When he was 10, Vogelsberger’s parents gave him a children’s book that included facts about the solar system, which he credits with sparking his early interest in astronomy. As a teenager, he and a friend set up a makeshift astronomy laboratory and taught themselves how to set up telescopes and build various instruments, one of which they designed to measure the magnetic field of different regions of the sun.

Germany’s university programs offered no astronomy degrees at the time, so he decided to pursue a diploma in computer science, an interest that he had developed in parallel with astronomy. He enrolled at the Kalrsruhe Institute of Technology for two semesters, then decided to pivot to a general physics diploma, which he completed at the University of Mainz.

He then headed to the University of Munich, where he learned to apply computer science techniques to questions of astronomy and astrophysics. His PhD work there, and at the Max Planck Institute for Astrophysics, involved simulating the detailed structure of dark matter and how it’s distributed at small scales across the universe.

The numerical simulations that he helped to develop showed that, at small scales comparable to the size of the Earth, dark matter can clump and move through the universe in “streams,” which the researchers were able to quantify for the first time through their simulations.

“I always enjoyed looking through a telescope as a hobby, but using a computer to do experiments with the whole universe was just a very exciting thing,” Vogelsberger says. “In astrophysics, we have only this one universe which we can observe. With a computer, we can create different universes, which we can check (with observations). That was very appealing to me.”

In 2010, after earning a PhD in physics, Vogelsberger headed to Harvard University for a postdoc at the Center for Astrophysics. There, he redirected his research to visible matter, and to simulating the formation of galaxies through the universe.

He spent the bulk of his postdoc building what would eventually be Illustris — a highly detailed and realistic computer simulation of galaxy formation. The simulation starts by modeling the conditions of the early universe, around 400,000 years after the Big Bang. From there, Illustris simulates the expanding universe over its 13.8-billion-year evolution, exploring the ways in which gas and matter gravitate and condense to form stars, black holes, and galaxies.

“If you ran one of these simulations from beginning to end on a desktop computer it would take a couple thousand years,” Vogelsberger says. “So, we had to split this work among tens of thousands of computers to get to a reasonable run time of around six months.”

He and his colleagues ran the simulations on supercomputers in France, Germany, and the United States to reproduce the evolution of galaxies within a cubic volume of the universe measuring 350 million light years across — the largest simulation of the universe ever developed at the time.

The initial output from Illustris took the form of numbers. Vogelsberger went a step further to render those numbers into visual form, condensing the enormously complex computations into short, stunning videos of a rotating cube of the early expanding universe, sprouting seeds of swirling galaxies.

Vogelsberger and his colleagues published a paper in Nature in 2014, detailing the simulation’s output, along with its visualizations. Since then, he has received countless requests for the simulations, from scientists, media outlets, and planetariums, where the visualizations of galaxy formation have been projected onto domes in high definition. The simulations have even been commemorated in the form of a German postal stamp.

In 2013, Vogelsberger joined the physics faculty at MIT, where he remembers having initial doubts over whether he could keep up with the “top of the top.”

“I realized very quickly that people have high expectations, but they also help you to achieve what you need to achieve, and the department is extremely supportive on all levels,” he says.

“All these simulations start with a uniform universe — nothing but helium, hydrogen, and dark matter,” Vogelsberger says. “And when I watch how everything evolves to resemble something like our universe, it makes me wonder at how far we have gotten with our understanding of physics. Humankind has been around for a short period; nevertheless, we’ve been able to develop all these theories and technologies to be able to do something like this. It’s pretty amazing.”

This is how a “fuzzy” universe may have looked

The universe in a cube