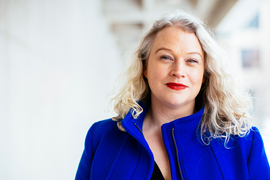 When she entered the field of particle physics in the early 2000’s, Lindley Winslow was swept into the center of a massive experiment to measure the invisible.

Scientists were finalizing the Kamioka Liquid Scintillator Antineutrino Detector, or KamLAND, a building-sized particle detector built within a cavernous mine deep inside the Japanese Alps. The experiment was designed to detect neutrinos — subatomic particles that pass by the billions through ordinary matter.

Neutrinos are produced anywhere particles interact and decay, from the Big Bang to the death of stars in supernovae. They rarely interact with matter and are therefore pristine messengers from the environments that create them.

By 2000, scientists had observed neutrinos from various sources, including the sun, and hypothesized that the particles were morphing into different “flavors” by oscillating. KamLAND was designed to observe the oscillation, as a function of distance and energy, in neutrinos generated by Japan’s nearby nuclear reactors.

Winslow joined the KamLAND effort the summer before graduate school and spent months in Japan, helping to prepare the detector for operation and then collecting data.

“I learned to drive a manual transmission on reinforced land cruisers into the mine, past a waterfall, and down a long tunnel, where we then had to hike up a steep hill to the top of the detector,” Winslow says.

In 2002, the experiment detected neutrino oscillations for the first time.

“It was one of those moments in science where you know something that no one else in the world does,” recalls Winslow, who was part of the scientific collaboration that received the Breakthrough Prize in Fundamental Physics in 2016 for the discovery.

The experience was pivotal in shaping Winslow’s career path. In 2020, she received tenure as associate professor of physics at MIT, where she continues to search for neutrinos, with KamLAND and other particle-detecting experiments that she has had a hand in designing.

“I like the challenge of measuring things that are very, very hard to measure,” Winslow says. “The motivation comes from trying to discover the smallest building blocks and how they affect the universe we live in.”

Winslow grew up in Chadds Ford, Pennsylvania, where she explored the nearby forests and streams, and also learned to ride horses, even riding competitively in high school.

She set her sights west for college, with the intention of studying astronomy, and was accepted to the University of California at Berkeley, where she happily spent the next decade, earning first an undergraduate degree in physics and astronomy, then a master’s and PhD in physics.

Midway through college, Winslow learned of particle physics and the large experiments to detect elusive particles. A search for an undergraduate research project introduced her to the Cryogenic Dark Matter Search, or CDMS, an experiment that was run beneath the Stanford University campus. CDMS was designed to detect weakly interacting massive particles, or WIMPS — hypothetical particles that are thought to comprise dark matter — in detectors wrapped in ultrapure copper. For her first research project, Winslow helped analyze copper samples for the experiment’s next generation.

“I liked seeing how all these pieces worked together, from sourcing the copper to figuring out how to build an experiment to basically measure the impossible,” Winslow says.

Her later work with KamLAND, facilitated by her quantum mechanics professor and eventual thesis advisor, further inspired her to design experiments to search for neutrinos and other fundamental particles.

After completing her PhD, Winslow took a postdoc position with Janet Conrad, professor of physics at MIT. In Conrad’s group, Winslow had freedom to explore ideas beyond the lab’s primary projects. One day, after watching a video about nanocrystals, Conrad wondered whether the atomic-scale materials might be useful in particle detection.

“I remember her saying, ‘These nanocrystals are really cool. What can we do with them? Go!’ And I went and thought about it,” Winslow says.

She soon came back with an idea: What if nanocrystals made from interesting isotopes could be dissolved in liquid scintillator to also realize more sensitive neutrino detection? Conrad thought it was a good idea and helped Winslow seek out grants to get the project going.

In 2010, Winslow was awarded the L’Oréal for Women in Science Fellowship, which aims to support the most promising postdoctoral female scientists in the United States. She put the accompanying grant toward the nanocrystal experiment, which she named NuDot, for the quantum dots (a type of nanocrystal) that she planned to work into a detector. When she finished her postdoc, she accepted a faculty position at the University of California at Los Angeles, where she continued laying plans for NuDot.

Winslow spent two years at UCLA, during a time when the search for neutrinos circled around a new target: neutrinoless double-beta decay, a hypothetical process that, if observed, would prove that the neutrino is also its own antiparticle, which would help to explain why the universe has more matter than antimatter.

At MIT, physics professor and department head Peter Fisher was looking to hire someone to explore double-beta decay. He offered the job to Winslow, who negotiated in return.

“I told him what I wanted was a dilution refrigerator,” Winslow recalls. “The base price for one these is not small, and it’s asking a lot in particle physics. But he was like, ‘done!’”

Winslow joined the MIT faculty in 2015, setting her lab up with a new dilution refrigerator that would allow her to cool macroscopic crystals to millikelvin temperatures to look for heat signatures from double-beta decay and other interesting particles. Today she is continuing to work on NuDot and the new generation of KamLAND, and is also a key member of CUORE, a massive underground experiment in Italy with a much larger dilution refrigerator, designed to observe neutrinoless double-beta decay.

Winslow has also made her mark on Hollywood. In 2016, while settling in at MIT, a colleague at UCLA recommended her as a consultant to the remake of the film “Ghostbusters.” The set design department was looking for ideas for how to stage the lab of one of the movie’s characters, a particle physicist. “I had just inherited a lab with a huge amount of junk that needed to be cleared out — gigantic crates filled with old scientific equipment, some of which had started to rust,” Winslow says. “[The producers] came to my lab and said, ‘This is perfect!’ And in the end it was a really fun collaboration.”

In 2018, she launched a pilot program within the physics department to support students and postdocs, and particularly young female physicists, in building their careers. The physics research fellowship provides financial support, and also workshops to help students with the practical skills of writing grant proposals, budgets, and timelines to advance their research projects — essential skills that Winslow learned from her own mentors.

That same year, her work took a surprising turn when she was approached by theorist Benjamin Safdi, then at MIT, who with MIT physicist Jesse Thaler and former graduate student Yonatan Kahn PhD ’15 had devised a thought experiment named ABRACADABRA, to detect another hypothetical particle, the axion, by simulating a magnetar — a type of neutron star with intense magnetic fields that should make any interacting axions briefly detectable. Safdi heard of Winslow’s refrigerator and wondered whether she could engineer a detector inside it to test the idea.

“It was an example of the wonderfulness that is MIT,” recalls Winslow, who jumped at the opportunity to design an entirely new experiment. In its first successful run, the ABRACADABRA detector reported no evidence of axions. The team is now designing larger versions, with greater sensitivity, to add to Winslow’s stable of growing detectors.

“That’s all part of my group’s vision for the next 25 years: building big experiments that might detect little particles, to answer big questions,” Winslow says.