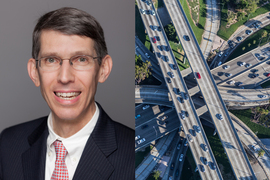 With a timeframe resembling that of a construction project, the U.S. Congress is working on an infrastructure bill. How effective could the legislation be? In a new paper, James M. Poterba, the Mitsui Professor of Economics at MIT, and co-author Edward Glaeser, an economist at Harvard University, survey economic aspects of infrastructure investment in the U.S. They advocate for cost-benefit analyses of projects, find that repairing infrastructure often pays off more than new projects, and suggest that infrastructure user fees be considered as a source of financing for projects.

The paper, “Economic Perspectives on Infrastructure Investment,” is being published by the Aspen Institute Economic Strategy Group. Poterba, an expert on taxation and government spending, among other topics, notes that many members of the MIT community, especially civil engineers and urban planners, have crucial expertise on the design and construction of infrastructure projects, but that economists can also make important contributions to the selection and scaling of such projects. MIT News talked with Poterba about his new analysis.

A: The economic touchstone for thinking about the infrastructure gap, and which projects should be undertaken, is a very standard tool: cost-benefit analysis. But it’s easier said than done. The benefits of a new bridge or subway line accrue over decades, so estimating them requires projecting utilization and demand far into the future. There are also important network considerations. In Seattle, where there are few connections between some parts of the city and others, one bridge can be very valuable because it establishes new links among areas, while building a duplicative bridge has less value.

At the same time, costs are hard to forecast, especially in areas where infrastructure has the greatest potential benefit and is the most expensive. Despite these challenges, our best hope for avoiding bridges to nowhere, and understanding the differences among projects, is trying to discipline ourselves with cost-benefit analysis.

Say a piece of a freeway in Los Angeles has seven hours a day of heavy congestion. What are we going to do about it? One approach is to build more lanes. Another approach, from the economics toolkit, could be to implement a user charge, recognizing the costs of congestion at some times of day. That would encourage efficient use of the roadway. Undertaking new and expensive building projects in dense urban areas is not necessarily the only way to reach our objectives.

Finally, cost-benefit analyses suggest the returns on maintaining and upgrading existing infrastructure are often higher than the returns on building new projects. That’s partly because many of our already-built highways and airports are in places where demand is greatest. The political process, unfortunately, is a bit biased in favor of new projects. It’s the ribbon-cutting phenomenon. Elected officials get more favorable media coverage for a new highway or bridge, compared to extending an airport runway. But we should examine costs and benefits of maintenance rebuilding projects if our goal is to spend infrastructure dollars most effectively.

Q: Why is infrastructure so expensive in the U.S.?

A: It’s devilishly difficult to make good systematic comparisons of infrastructure costs across places in the U.S. or across countries. But, particularly for megaprojects in cities, the U.S. is an outlier. Some recent tunnel-centered projects in New York City, such as the Second Avenue Subway and the East Side Access project [bringing the Long Island Railroad to Grand Central Station], are very expensive relative to recent tunneling projects in Paris or London. Several things seem to contribute to the cost differences. One is project design. There are pros and cons to this, but the fact is, the U.S. provides opportunities for a lot of stakeholders to enter the discussion about what’s being built. That can raise costs. There’s some indication that newer interstate highways in the U.S. are “wigglier” than older ones, perhaps because one way to avoid neighborhood disruptions is to wind around them.

Second, the way we procure infrastructure can contribute to higher costs. In New York City, longstanding requirements call for separate bidding of every part of an infrastructure project: The electrical work for the Second Avenue Subway needed to be bid separately from the cement work and from the tunneling. If you renovate your kitchen, you would typically have a contractor give you a bid for everything, and there is a comparative advantage to that approach.

Another problem is delay, which increases costs because the project sponsor must borrow for more years, and because it delays the start of project benefits and any associated revenues. This reduces the benefit-to-cost ratio.

Domestic content legislation, which can mandate the use of high-cost [material] inputs, can raise costs. Implementation of prevailing wage standard laws seems to differ across the U.S., in some cases resulting in quite high wage rates for workers involved in contruction projects.

We can’t point to any one thing and say, “That’s the source.” Also, it is important to recognize that some of the factors that contribute to higher costs also have significant benefits. Think of Robert Moses in New York City, bulldozing neighborhoods to push through the Cross-Bronx Expressway — there are good reasons people pushed back on that experience. But it’s useful to recognize that reducing the community impacts of infrastructure project can come at a cost, and that cost needs to be traded off against the value created.

Q: This paper contends that user fees can help fund infrastructure more extensively. What is the case for that?

A: One question that comes up all the time with infrastructure projects is: How do we pay for them? Raising taxes, using general revenues, and borrowing to fund the projects are time-honored approaches. User fees, such as tolls on bridges, highways, and tunnels, recoup costs from those who use the infrastructure. Congestion tolls are a great example. A charge in airline tickets to recoup airport building costs is another.

One example of a user charge, to offset highway damage, would be a weight-based vehicle miles traveled tax. Engineering evidence suggests the damage to a highway from a vehicle, in terms of eroding the road surface, is proportional to the fourth power of the axle weight, so that a large commercial truck with few axles imposes a lot more damage than your light-duty vehicle. A user fee accounting for that would provide incentives to avoid very heavy trucks, and would make the operators cover the costs of the road damage they impose, while also raising revenue to contribute to highway maintenance.

So labeling all user fees as regressive is a mistake. Rather, one should examine the facts and circumstances in different cases. Financing infrastructure projects is always a challenge, and charging users should not be taken off the table without careful analysis.

A new paper co-authored by Prof. James Poterba finds that not all projects to enhance infrastructure are worth investing in, reports David Harrison for The Wall Street Journal. “If we are going to commit a significant amount of resources to new infrastructure projects or to maintain our existing infrastructure, bringing some discipline to the way we decide what we’re spending on is an important element of this,” says Poterba.

With buildings and infrastructure, it pays to take a life-cycle perspective

People rarely vote after being incarcerated. Associate Professor Ariel White wonders what can be done about it.

The Plasma Science and Fusion Center mechanical engineer embraces her role in modeling fusion magnets and in promoting engineering to young women.