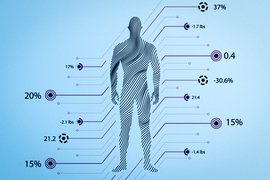 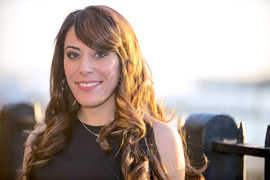 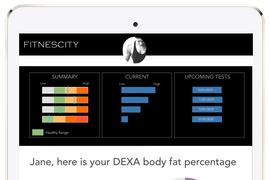 ↓ Download Image
Caption: This image shows a screenshot from the app.
Credits: Image: Courtesy of Fitnescity

Caption:
A screenshot from the Fitnescity app.
Credits:
Image: Courtesy of Fitnescity

About half of all women over 50 will experience a broken bone at some point. Those injuries can lead to major setbacks in function and independence from which some patients never fully recover. Fortunately, maintaining bone density can prevent such injuries. One way to maintain bone health is by getting adequate levels of calcium and vitamin D. That’s why many people want to track nutrient levels and bone density before they wind up in a hospital.

But the process for scheduling such tests requires people to find nearby clinics, pay insurance deductibles or out-of-pocket costs, and then look through complex, paper-based results to identify deficiencies. Tracking changes over time — in order to see how a new diet is affecting nutrition levels, for instance — can be even more difficult.

Fitnescity aims to make health and wellness monitoring more manageable by providing access to in-person lab testing and visual analytics. The company’s platform aggregates testing clinics and enables people to easily find, schedule, and pay for tests. It also presents results to users in a way that is easy to understand. Over time, Fitnescity can also show users trends to help them understand how diet and lifestyle changes are impacting their health.

“We’re making navigating personal health a lot easier,” says Fitnescity CEO Laila Zemrani MBA ’13, who co-founded the company with Çağatay Demiralp, a former visiting researcher with the Data Systems Group at MIT’s Computer Science and Artificial Intelligence Laboratory (CSAIL). “Making healthy lifestyle changes is already a lot of work. The last thing people want to do is spend hours on Google figuring out what kind of clinic to go to and how to use their results.”

Fitnescity has partnered with hundreds of clinics across the U.S. to offer tests measuring nutrition levels, fitness, metabolic performance, stress, and more. Such tests can offer crucial insights for preventing diseases and injuries that may only present themselves after years of negative health trends.

“Today 80 percent of the most common and costly diseases in the U.S. are preventable — things like heart disease and type 2 diabetes,” Zemrani says. “You can often prevent these diseases by changing your lifestyle.”

In pursuit of an idea

Zemrani began classes at MIT’s Sloan School of Management in 2011.

“I came to the U.S. for Sloan,” she says. “In my application, I was clear that I wanted to start a company here. For me, Sloan was the perfect place because it allowed me to get to the American market. And, as an immigrant new to the country you want to be immersed, but you also want to develop a network and learn the hard and soft skills for building a company.”

She also became a Legatum Center fellow and the co-president of the MIT Sloan Entrepreneurship Club. But she says the biggest benefit of MIT was the network she developed.

Zemrani first had the idea for Fitnescity following a difficult personal experience scheduling health tests. Around that time she met Demiralp through a mutual friend and the pair started building a platform to help people understand their test results.

In 2019, the co-founders secured a partnership with Mount Sinai Hospital in New York, where they helped schedule users’ first tests. From there they gradually expanded to other medical centers.

“It’s very replicable,” Zemrani says. “If it works in one location, you only need to bring that model to other locations nationally.”

Zemrani says there is a gap between underutilized testing equipment and a growing demand for tests from people trying to become healthier. By simplifying scheduling and reporting for consumers, Fitnescity allows local clinics and labs to reach more consumers.

“For someone who is already in the market for a test, we’re the aggregator, and by aggregating we can offer a better experience, because the market is very fragmented,” Zemrani says.

When a test requires approval from a doctor, Fitnescity and its partners work with a national network of board-certified physicians to review test requests and results. The user can also speak with a physician about their results at no additional cost.

By making pricing transparent at local clinics, Zemrani says Fitnescity also helps users save money whether they’re going through insurance or not.

“We help you find and compare options,” Zemrani says. “The test could be something the consumer wants that’s not covered, or maybe it’s covered but it’s for someone who has a high deductible — which is the majority of the population.”

And as the company has grown, the founders’ MIT connections continue to pay dividends. Early on, Zemrani spent months researching companies like Quest Diagnostics and looking for opportunities for partnerships. Finally, she realized Quest’s CEO and executive vice president of general diagnostics were both Sloan alumni. She sent a cold email and was invited to the office to share more details about Fitnescity.

“I should have checked that in the beginning!” says Zemrani, who remains connected to MIT through a program with the Sandbox Innovation Fund that mentors startups in Morocco. “[Quest’s leadership] liked the vision of the company and they made the partnership happen, and basically what I was trying to accomplish for half a year happened that same day.”

A force for public health

With support from their doctors, many people are using tests like the ones on Fitnescity’s platform to be more proactive about their health. One Fitnescity user, for instance, lost both of her parents to heart disease within months of each other. The losses motivated her to adjust her lifestyle to reduce her own risk, in hopes her son could avoid the grief she was going through.

Fitnescity helped her schedule tests, including the Dual Energy X-Ray Absorptiometry (DEXA) scan, and track results. After months of diet and exercise changes, the tests showed that even though she wasn’t losing weight, she was losing visceral fat — a fat tied to several serious health complications — and gaining muscle mass, indicating her lifestyle changes were paying off.

The partnership with Quest, which was sparked by a meeting in 2019 but officially announced this October, is a game-changer for Fitnescity. It will open up thousands of Quest’s testing locations around the U.S. for Fitnescity’s users.

The Quest partnership will also help Fitnescity add testing capabilities. In the future, Zemrani sees Fitnescity expanding its offerings into more medical testing, like MRIs, that would be recommended by a doctor.

“Our value is really about making sure you’re not just looking at your body when you’re sick, or if you’re healthy maybe once every year or two. We want to help you build a comprehensive and longitudinal view of your health, so you can see problems before they happen,” Zemrani says. “It’s a lot easier to prevent than it is to treat something when it’s already here.”