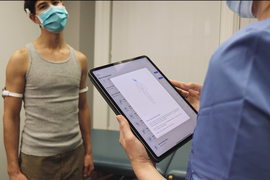 A clinician investigating a muscle injury will usually start the exam with questions about the patient’s medical history and how they think the injury occurred. The clinician might then place their hands on the injured area and ask the patient to move around. Often, the only quantitative data collected come from asking the patient to use a pain scale from 1 to 10.

Compare that to the routine for treating a fever or high blood pressure. A doctor or nurse can run a simple test and quantify the problem. After treatment begins, they can measure the patient’s progress and determine how far they are from a healthy baseline.

That’s the kind of precise, data-driven approach the startup Figur8 is bringing to musculoskeletal injuries. The company, founded by CEO Nan-Wei Gong SM ’09, PhD ’13, has created a sensor-based system that can track body movement and muscle activity to quantify the severity of injuries, help doctors create treatment plans, and measure improvement.

“Figur8 is a musculoskeletal diagnostic system,” says Gong, who is currently a Media Lab research affiliate. “It’s a solution for the clinician and patient to pinpoint the risk of injury, the source of injury, and to quantify recovery in a health category that traditionally doesn’t have a lot of scientific data readily available.”

Figur8 is working in health clinics to gather data that will improve its AI-driven predictive models. It’s reaching those clinics by partnering with insurers and employers. The company’s system has already been used to help thousands of patients, and Gong says the system will be able to help diagnose and treat 80 percent of musculoskeletal injuries by the end of this year.

Longer term, Gong believes Figur8’s system could enhance the kind of home-based care that has skyrocketed during the pandemic.

“Our vision is to create a self-diagnostic tool that patients can use with their doctors,” Gong says. “If it’s easy enough to self-administer at home, we can reduce in-person visits in the future. The right tool can solve the puzzle of musculoskeletal home care, from the diagnostic to therapeutic stages.”

Figur8 is Gong’s latest step into entrepreneurship. In 2013, she completed her PhD in the Responsive Environments Group in the Media Lab under Joe Paradiso, the Alexander W. Dreyfoos Professor at MIT. Her work focused on combining data from novel sensor designs. The work led to a collaboration with Ahmed Kirmani SM ’10, PhD ’15, Andrea Colaco SM ’10, PhD ’14 and Professor Vivek K. Goyal, who were building algorithms to track hand gestures.

While still pursuing their PhDs, the researchers started a company called 3dim Technologies to bring gesture recognition to smartphones and other devices. They went on to patent a technology that allowed users to interact with devices by making hand motions in the air.

The company won the MIT $100K Entrepreneurship Competition in 2013 and garnered significant interest from industry. It was acquired by Google in 2014.

“[3dim] was a great experience that helped me understand what it means to commercialize a research project and drive a business plan,” Gong says. “I never would have gone through this new path without it.”

Following that success, Gong continued at MIT as a research affiliate in the Media Lab, a position she’s held for the last seven years. In 2017, she decided to start a new company based on wearable sensors.

“The MIT community is a great community to be in,” Gong says. “It’s different from other schools because MIT students start deep tech companies. … [Figur8’s] sensor system is not a spinoff of my PhD work, but the whole concept of using wearables to quantify biomechanics started from a collaboration between [the Responsive Environments Lab] and Massachusetts General Hospital more than 20 years ago. Today, Figur8 works with the same set of clinicians who have been investigating wearables with MIT for decades.”

Figur8 received support from the Media Lab-affiliated E14 Fund and spent the first few years developing a platform based on proprietary sensors, algorithms, and software to help users understand and respond to those findings.

Other high-speed, 3-D motion tracking systems use dozens of expensive cameras mounted around a room. You see these systems when Hollywood studios show you movie scenes before the special effects are added, revealing actors in spandex suits covered in sensor-laden dots.

“We’ve designed a wearable system that maps joints, muscle groups, and tiny movements, and now we are more accurate than the system that costs hundreds of thousands of dollars,” Gong says. “Our system is going to be maybe 5 percent of the cost of the leading vision tracking system, because we don’t need the markers, we don’t need the room, or the supercomputer in the background — everything is calculated on your mobile app.”

Gong says setting up Figur8 is also faster than setting up traditional systems. For a full-body evaluation, users strap seven sensors on their body. To evaluate a specific muscle group or joint, the system works with only one or two sensors. The sensors send data to a mobile app that walks users through a series of movements similar to a physical exam. The system uses a technology called surface mechanomyography, which tracks tiny muscle movements to measure contractions and other muscle activity. A report is then automatically generated that shows the differences between a healthy person’s musculoskeletal performance and the user’s.

“The report allows you to highlight anomalies in muscle contraction and quality, as well as range of motion, and you can track progress,” Gong says. “You’ll hear a physical therapist or a coach say, ‘I can tell what injury you have by the way you walk.’ That takes a lot of experience. We’ve translated that to data and analytics.”

When the pandemic first disrupted nonessential health care procedures, Gong saw Figur8’s system as a way to bring the rise in telemedicine to musculoskeletal injuries. She believes the company is on track to fulfill that mission.

“The vision for the next generation of this product is to let everyone have access to this at home.”

Out of the lab and into the world