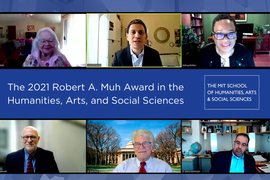 Former British foreign minister David Miliband SM ’90 offered a sobering warning about human rights and democracy while delivering a special MIT lecture on Wednesday — and outlined how we might confront the emerging “age of impunity,” in which authoritarian governments and even democracies are increasingly flouting the rule of law.

“The next decade promises to be a race or a fight between accountability and impunity, within our own countries and internationally,” Miliband said, noting that lawlessness on the part of and within countries “applies in politics, in economics, even in respect of the environment.” About 68 percent of the world’s population is now living under autocratic rule, representing a 20 percentage point increase over the last decade, he said. According to the Economist Intelligence Unit index, about 70 percent of the world’s countries, including many democracies, saw a reduction in political freedom last year.

And yet, Miliband contended while giving MIT’s Muh Alumni Award Lecture, “The coming age of impunity is only inevitable if we let it be so.” Instead, he suggested, by deploying “countervailing power” from government, civil society, and the private sector, supporters of rights can begin to curb the ominous trend toward authoritarianism.

Miliband served as U.K. foreign secretary from 2007 to 2010; he was also a member of Parliament in Britain from 2001 to 2013 and served as secretary of state for the environment. Miliband received his undergraduate degree from Oxford University in 1987 and his master’s from MIT’s Department of Political Science. For the last several years, Miliband has been serving as president and CEO of the International Rescue Committee (IRC), based in New York.

As Miliband noted in his remarks, this is not the first talk he has delivered at MIT; he also gave MIT’s 2010 Compton Lecture, about the prospects for peace in Afghanistan, while serving as foreign secretary. Miliband’s remarks on Wednesday were very much shaped by his work with the IRC, which has helped refugees globally.

“There is a clear trend of growing international lawlessness and normlessness,” Miliband said, noting that there are now 34,000 civilians killed in warfare every year, double the number of five years ago, and almost 80 million refugees and displaced people around the world, a record. There are also increasing numbers of aid workers killed per year and more military strikes on hospitals.

Part of the reason for this, Miliband suggested, is a global “shift in the balance of power” away from democracy and toward authoritarian states, whose leaders believe that “what goes on within a state is the business of that state and that state alone.  This has weakened the ability of the international system to enforce and uphold the basic pillars of the international order,” such as the Geneva Conventions.

Thus “there is a vicious circle in play,” he observed, in which more authoritarian countries are likely to violate human rights, while feeling less outside pressure to adhere to basic norms.

Yet ultimately, Miliband declared, “international relations needs the rights of individuals to be upheld against the rights of states, or the result is despotism and impunity.”

An organizing principle for this effort, Miliband said, is the concept of “countervailing power,” coined by the economist John Kenneth Galbraith several decades ago to describe efforts to reduce the concentration of economic power among an elite few.

“The idea of countervailing power has relevance in curbing the abuse of state power, not just private power,” Miliband said. “And it needs to apply in the international domain, not just the national one.”

As Miliband described it, efforts to create such countervailing power must take many forms. He approved of a potential international meeting, led by U.S. President Joe Biden, of democratic countries, to discuss ways of sustaining democracy. But Miliband described several other tools that could be used to curb right abuses.

These include U.N.-led investigations of war crimes; the use of democratic legal systems to pursue war crimes cases where applicable (such as a case of Syrians being prosecuted in Germany); economic sanctions; the suspension of aid programs in places where rights abuses occur; and even private-sector interventions such as boycotts, or the suspension of, say, insurance coverage for those violating humanitarian law.

“The drift to impunity will not be stopped without those with economic power taking a stand,” Miliband said.

None of this, Miliband emphasized, will be easy.

Referring to “The Narrow Corridor,” a book about the battle to sustain liberal democracy, by MIT economist Daron Acemoglu and University of Chicago political scientist James Robinson, Miliband noted that “there is nothing ‘natural’ about liberal democracy. If anything, it is an unnatural creation, and certainly one that takes perpetual nurture if it is to endure.”

Moreover, Miliband noted, when it comes to holding authoritarians accountable, “Accountability courts the accusation of being slow. But the methodical tortoise sometimes beats the hyperactive hare.”