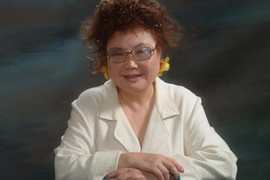 The first woman of Asian descent to receive tenure at MIT, Rha held four degrees from the Institute and taught at MIT for more than four decades. Her husband, MIT professor of microbiology Anthony Sinskey ScD ’67, also attended MIT, as did their two sons — Tong-ik Lee Sinskey ’79, SM ’80 and Taeminn Song MBA ’95, who is the director of strategy and strategic initiatives for MIT Information Systems and Technology (IS&T) — and two granddaughters.

“MIT is my home,” Rha told MIT Technology Review in 2006. “I absolutely love the Institute and feel obliged to do whatever I can for it, not only because it’s done so much for me, but also because I feel I am part of this great institution.”

Rha was born and raised in Seoul, Korea. According to family members, her father was a prominent medical doctor who was a pioneer in anatomy, and she developed an interest early in chemical engineering, food science, and food technologies for the development of new foods, medicines, and chemicals. Rha came to the United States in 1956 with the intention of attending MIT and the idea of learning how to design and produce high-quality baby food for families in South Korea.

Rha went on to explore the science of biomaterials and their translation toward clinical use. She leveraged frontier tools of chemistry and biotechnology for the discovery of novel biomolecules and high-resolution molecular structure, function, and bioactivity determination. Her creative passion and perseverance led to the creation of several biotech companies in the health and wellness platforms. After helping to start the biopolymer program at biotechnology firm Genzyme, she traveled to Malaysia, Thailand, the Philippines, and Australia, deciding to work on biotechnology projects with Malaysia because of its biodiversity, expertise in plantation sciences, and its educational system. Rha formed and was the principal investigator for the Malaysia-MIT Biotechnology Partnership Program, which involved several Malaysian research institutions and MIT.

Her research with undergraduate students, graduate students, and postdocs led to technologies that were foundational to the development of several biotechnology and food science organizations and to her publishing more than 200 papers. Rha held more than 20 patents. She was also a founding member of Women’s World Banking, which provides support to microfinance institutions that offer credit to low-income entrepreneurs in the developing world, especially women.

Throughout her career, Rha was known as a compelling colleague and educator and a generous mentor. Many condolence notes sent to her husband and family from all over the world included acknowledgements of her intellectual influence, as well as fond remembrances of the many parties, dinners, and culinary adventures she hosted or organized — often to celebrate the accomplishments of her students, colleagues, and friends.

“Professor Rha was an amazing mentor,” says Anushree Subramaniam ’10, a former MIT student who worked in Rha’s Biomaterials Science and Engineering Lab. “She was an ‘ideas person’ and would encourage me to dream big and to strive to do work that would change the world. I never had an interaction with Professor Rha where I did not come away enriched and having learned something. Once you met her, you were immediately engulfed by the warmth of her personality, her unparalleled intellectual prowess, and her iconic style.”

Many photos posted online as a memorial showed Rha with students, colleagues, her family, and her husband, who was “her confidant, colleague, supporter, and lifelong partner,” according to Rha’s granddaughter, Deborah Jiehyun Song.

Rha established a gift annuity in 2006 whose ultimate purpose was updated in 2019 to provide financial support for graduate students in the Department of Biology, with preference for students interested in microbiology.

As Song wrote in a tribute to her grandmother, “she will be forever missed and remembered as a bright soul that strove to change the world for the better with her steadfastness, style, spirit, and smarts.”

In addition to her husband and two sons, Rha is survived by her daughter-in-law, Hyunmee Elaine Song, and five grandchildren, and she was a sister to WanKyun Kim, ChungKyun Kim, HwaKyun Cha, SooKyun Rha, the late SungKyun Rha, TaeKyun Rha, and YoungKyun Rha. Rha’s family will host a memorial in October. Gifts in Rha’s memory can be made to the ChoKyun Rha (1962) and Anthony J Sinskey (1967) Fund.