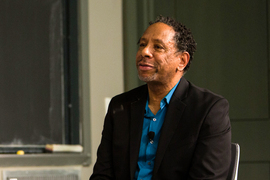 ↓ Download Image
Caption: Ceasar McDowell and the group We Who Engage MIT have issued a report, “The Civic Design Framework: principles for public conversations during a time of crisis,” detailing methods they recommend for effective public dialogue.
Credits: Image: Jake Belcher

Caption:
Ceasar McDowell and the group We Who Engage MIT have issued a report, “The Civic Design Framework: principles for public conversations during a time of crisis,” detailing methods they recommend for effective public dialogue.
Credits:
Image: Jake Belcher

Last year leaders in Poughkeepsie, New York, started the Children’s Cabinet, an organization aimed at bolstering cradle-to-career services and support for the city’s kids. With a wide-ranging agenda, they wanted to figure out how to reach the community for input — and worked with Ceasar McDowell, professor of the practice of civic design and associate head of MIT’s Department of Urban Studies and Planning (DUSP). McDowell is an expert in designing public conversations and leads We Who Engage MIT, a project aimed at enhancing outreach.

Now the group has issued a report, titled “The Civic Design Framework: Principles for public conversations during a time of crisis,” detailing the methods they recommend for this — for Poughkeepsie or any organization seeking effective public dialogue. McDowell emphasizes that We Who Engage is a collaborative effort involving students, alumni, and himself, and that the group gives much “ownership” to people to work their own way. MIT News spoke with McDowell about the new report.

Q: What was the genesis of the Civic Design Framework project?

A: This has come out of my work for many years, around the problem we’re facing in this country. We’re living among the most demographically complex set of people who have ever lived together, and we have neither the infrastructure nor the process for democracy to work. Our public engagement process was built on a foundation of exclusion. Going back to the New England town hall and other institutions, the design worked because it was clear who didn’t belong. If you have a group of men who lived together and owned land, their conversations could be structured to get results. But we’re in a different world now, and we haven’t taken on what that means for public engagement. So we have to build something from the ground up again.

Q: This report emphasizes different types of conversations, depending on whether the goal of the dialogue is to reflect, plan, or act, for instance. You say when a group is reflecting, the conversation might be about “framing” or “ideating,” and when it’s planning, it might be “prioritizing” or “deciding.” When a group is acting, the conversation might focus on “implementing” or “monitoring.” Why do those distinctions matter?

A: We talk a lot about the public’s mistrust of institutions, but we don’t talk enough about the people inside institutions mistrusting the public and its ability to make judgements. The only way to change that is to invite the public into the first step, framing what the issue is — to understand how people experience a problem.

But when you’re framing something, you are in a different space cognitively, versus when you’re in the space of imagination or making value choices about a set of policy options. So you have to design conversations to optimize what you’re trying to get out of them.

Designing from the margins is another one of our anchor principles. People who are living at the margins are living with the failures of the [social and political] system. It centers their voice, so you have a better opportunity to find solutions further down the road that are going to work for a broader set of people.

Q: Who do you want to read this report? Community groups? Public officials? Both?

A: If you look at mayoral offices and [other] government offices, we have co-mingled the political process with the engagement process. There are offices set up to do public outreach, but those things are often deeply tied to party politics. They’re also tied to making sure we solve problems quickly — and I’m not saying this is a bad thing — and demonstrating that we can get things done. But the public needs more than just quickly getting things done. The public needs ways of understanding and building connections.

When Barack Obama won the presidency for the first time, they set up an office for public engagement. If you remember that campaign, one of the things that was so powerful was the way it cut across so many different sectors of America. [But] what was never on the table was [using] his contact list to build public engagement and dialogue [after he was in office]. The thing he ignited could not be used to build a deeper democracy, even though it would have been a perfect launchpad for it. We need something that is foremost about the public and its relationship with itself.

Q: But don’t we want public conversation to reach the political sphere?

A: Yes. Absolutely. We want people to live their political lives, but in a way so that political identity is not the only thing they’re considering. We’re all complex. Look at any issue and you realize values aren’t absolute, people are always making tradeoffs. But we don’t have a space to understand each other in the midst of all these tradeoffs.

Q: So in one sense you’re asking us to step back and take a more fundamental look at ourselves, policy goals aside?

A: Part of what’s going on, no matter where you look, is that people are really asking one question: What’s the future of America, and where am I in that future?

We have had “question campaigns” examining that [run through an initiative McDowell helped found, America’s Path Forward]. We ask people: What’s your question about the future of America? We find people who have similar questions and invite them into conversations [in a room] together. But the conversations are not about solving that question. Our focus is: What experiences in your life have gotten you to that question? And when they show up in these rooms, they find people they didn’t expect to be there. And they walk away with a broader understanding of the things they care about. All of this is about getting the public into the kinds of conversations they need to be in.