Trying to put the brakes on car ownership 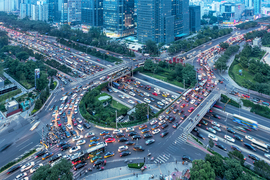 ↓ Download Image
Caption: To limit pollution and traffic congestion in Beijing, officials in 2011 imposed a citywide restriction on the number of automobiles residents can purchase annually. But the system has a loophole: Beijing residents have been going elsewhere in China to purchase cars, then bringing them home.
Credits: Image: stock image of Beijing traffic

Caption:
To limit pollution and traffic congestion in Beijing, officials in 2011 imposed a citywide restriction on the number of automobiles residents can purchase annually. But the system has a loophole: Beijing residents have been going elsewhere in China to purchase cars, then bringing them home.
Credits:
Image: stock image of Beijing traffic

To limit pollution and traffic congestion in Beijing, officials in 2011 imposed a citywide restriction on the number of automobiles residents can purchase annually. That policy has helped limit car sales and emissions. But the system has a loophole: Beijing residents have been going elsewhere in China to purchase cars, then bringing them home.

As a new study co-authored by MIT scholars finds, this policy “leakage” reduces the intended impact of the car-restriction system by about 35 percent. So, while Beijing adds fewer new cars per year than it once did, and its aggressive policy action has had an impact, the program also provides a case study for experts about the challenges of creative environmental and transportation policy in any setting.

One key point is the need for regional coordination in these areas, observes MIT professor Jinhua Zhao, co-author of a new paper detailing the study. Another issue is the continued need for urban design that is not automobile-centered, globally.

“If you want to design a car control policy for particular city while you don’t manage the [vehicle] flow from the region, then the policy doesn’t work,” says Zhao. “Beijing needs regional coordination among municipalities. You need to talk to your neighbor cities. It’s just like, if the city of Boston wanted to have congestion charges [for cars], all the municipalities in the Massachusetts Bay area would have to work together. Regional collaboration is one key solution.”

And while many cities in China’s have greatly added to their mass-transit capacity in recent years, Zhao notes that planners everywhere should ask: “Why do people have so much desire to own cars? The more you can provide really good and robust public transit, the less pressure there is for people to own and use cars.”

The paper, “Measuring policy leakage of Beijing’s car ownership restriction,” appears in the June issue of Transportation Research Part A: Policy and Practice. The authors are Yunhan Zheng, a graduate student in the MIT Urban Mobility Lab; Joanna Moody, a research program manager for the Mobility Systems Center of the MIT Energy Initiative; Shenhao Wang, a research scientist at the MIT Urban Mobility Lab; and Zhao, who is the associate professor of transportation and city planning in MIT’s Department of Urban Studies and Planning, and director of the MIT Mobility Initiative.

The research was supported by the Singapore-MIT Alliance for Research and Technology (SMART) Future Mobility Interdisciplinary Research Group, as well as the MIT Energy Initiative’s Mobility of the Future study.

“There’s no way you can manage this level of growth without massive congestion,” Zhao observes.

Moreover, Beijing and other Chinese cities were suffering well-publicized pollution problems. To reduce pollution, government leaders crafted several solutions, including the car-purchasing limit. From 2011 through 2013, the Beijing citywide limit was 240,000 new cars per year; now it is even lower, at 100,000 per year.

Beijing runs a lottery for applicants, to determine who can purchase vehicles.  Shanghai, another city that has crafted a similar policy, implemented an auction system in 1994, something Zhao has also studied and written about in multiple previous papers; auctioning car permits raises revenue for Shanghai and helps subsidize public transit, but in survey data, residents consider it less fair.

“They both are very aggressive policies to really push down the growth rate,” Zhao notes.

And the policies have clearly had an effect. However, despite the official limit on  new-vehicle registrations in Beijing, the actual number of new cars in the city may well be larger.

To investigate the effect of Beijing’s car ownership restriction policy on the growth of private cars in neighboring cities, the MIT researchers conducted a “difference-in-differences” analysis of car registrations in neighboring cities from 2006 to 2013, to evaluate how Beijing’s policy caused changes over time. The scholars found that in the three-year period from 2011 to 2013, after Beijing implemented its car-purchasing restrictions, vehicle sales in neighboring cities suddenly shot up by an additional 443,000 cars, above the amount the previous growth trajectory would have produced.

After accounting for various economic and demographic factors in the surrounding cities, to see if some of them had exceptional growth prospects as well, the researchers estimate that enough of those 443,000 cars would have wound up in Beijing to put that 35 percent dent in its vehicle-quota system. People were finding ways to circumvent the registration system.

“Once you draw a boundary, then you have to manage the boundary,” Zhao observes.

While the study is focused on Beijing, Zhao believes its findings have a variety of implications for transportation and climate policy globally — and even intersect with matters of effective governance.

“The leakage itself has different levels of consequences,” Zhao says. “One level is, the policy is not as effective. But, more importantly is that if you have a policy [avoided] by different people … then you may [damage] people’s trust of any policy.”

In this and other matters, then, it makes sense for officials and policymakers to anticipate such consumer reactions and cooperate regionally, if possible, to solve them. Or indeed, to plan regionally in the first place, from cars to transportation to climate.

“You need to talk about how to manage these things together,” Zhao says.

Moreover, Zhao notes, with the benefit of far-sighted urban planning and government provision of resources, Zhao notes, “many people wouldn’t need a car. But that requires a lot of investment, a lot of effort. To be fair to Beijing and Shanghai, they have done really well, investing in public transit. But it is still not sufficient to satisfy all the mobility demand.”

Still, if people can access jobs, schools, and commerce on foot or via public transit, that kind of provision of civic goods has profound implications for the environment — and can be a part of almost any transportation policy discussion.