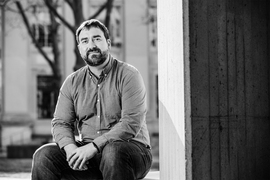 Some materials, including metals, consist of atoms densely packed in a lattice or crystal. These structures can be very good at conducting electricity, and their behavior is often relatively easy to predict. Other materials, such as plastics and other polymers, have a great deal of disorder to their structures.

Adam Willard, an associate professor of chemistry at MIT, wants to illuminate those disordered structures. Using theoretical models and high-powered supercomputers, he is developing ways to simulate the properties of these disordered materials and predict their behavior. This kind of modeling could help researchers replace heavy and brittle silicon-based photovoltaic cells with light and flexible alternatives made entirely of plastic.

“Our interest is really in trying to understand the role of molecular disorder in physical processes that are important in both biology and the energy sciences,” says Willard, who recently earned tenure in MIT’s Department of Chemistry. “We want to develop a deeper understanding of how molecular forces play a role in the chemical processes that are fundamental to life and industry.”

Growing up in Bend, Oregon, Willard wanted to become a doctor and entered the University of Puget Sound in Tacoma, Washington, as a pre-med major. However, by the end of his sophomore year, he had lost his enthusiasm for medicine and decided to switch to a double major in chemistry and math.

“Fortuitously, the next course I had to take was an undergraduate course in quantum mechanics in the chemistry department, and I loved it,” Willard recalls. “I decided then that being a chemistry professor would be a pretty nice gig because the material was so deep and captivating.”

Having switched his major late, Willard hadn’t done much chemistry research as an undergraduate, so he decided to spend a year after graduation working in an experimental spectroscopy lab at the University of Puget Sound. “It was a great experience because I got to have a spectrometer all to myself, and I got to spend late nights alone in the lab, collecting data and thinking about things. I enjoyed it immensely,” he says.

He attended graduate school at the University of California at Berkeley, drawn by its program in theoretical chemistry. There, he used computer simulations to study how hydrophobic forces between large molecules influence their behavior, as well as how water affects the interactions between such molecules.

After finishing his PhD, Willard went to the University of Texas at Austin to do a postdoc studying quantum dynamics, specifically those seen in organic photovoltaics — solar cells made from plastic. Such cells are lightweight, easy to make, and relatively inexpensive. However, at the molecular scale, these plastics are made of many tangled strands, which present complex pathways for the transport of electrons.

Much of Willard’s work in this area, which has continued since he joined MIT’s faculty in 2013, focuses on designing materials that will allow electrons to efficiently flow from one site, where they are excited by light, to the point where their energy is collected.

“For photovoltaic applications, we want to arrange photoexcitable molecules in a particular geometry, so that if we excite one molecule, the excited electron is passed through the material, molecule to molecule, in a way that guides and transforms them in predictable ways,” he says.

In his lab at MIT, Willard has also continued studying interactions between water and other molecules. While he focused on hydrophobic interactions as graduate student, he now analyzes hydrophilic molecules and how they interact with each other in water.

“Describing how hydrophilic objects interact with each other in water is much more complicated because there are many different ways that surfaces can be hydrophilic, whereas there's only one way to be hydrophobic. So, if I’ve solved the hydrophobic problem for one case, I’ve solved it for all of the cases. However, the behavior of hydrophilic particles depends very much on how they are hydrophilic, for example, positively and negatively charged surfaces have different influences on the surrounding water,” Willard says.

Some important types of hydrophilic interactions include protein-protein interactions and protein-drug interactions. These molecules often form weak hydrogen bonds that help hold them together. Water can affect these bonds, influencing the binding strength between two proteins or a protein and a drug.

In the last few years, Willard’s research group has developed computational methods to analyze the hydration environment surrounding a protein and how it depends on a protein’s conformation. They are now using machine-learning techniques, similar to those used to teach computer models to recognize objects, to identify sites of a protein that could be targeted by particular drugs.

Another area of research in his lab involves interactions that occur at surfaces where electrochemical reactions take place, such as those found in batteries. These interactions are typically difficult to simulate because describing the path of electrons within the electrodes requires massive computational resources, but Willard’s lab has developed methods to make this description more efficient. This kind of modeling could help to researchers to design better battery or electrocatalytic systems.

“Our hope is that our contributions will provide both new fundamental theory that will help people understand these systems better, but also in specific cases, provide molecular design principles that can be applied,” Willard says.