If anything happens to the eyes of the tiny, freshwater-dwelling planarian Schmidtea mediterranea, they can grow them back within just a few days. How they do this is a scientific conundrum — one that Peter Reddien's lab at Whitehead Institute has been studying for years.

The lab's latest project offers some insight: in a paper published in Science June 26, researchers in Reddien's lab have identified a new type of cell that likely serves as a guidepost to help route axons from the eyes to the brain as the worms complete the difficult task of regrowing their neural circuitry. 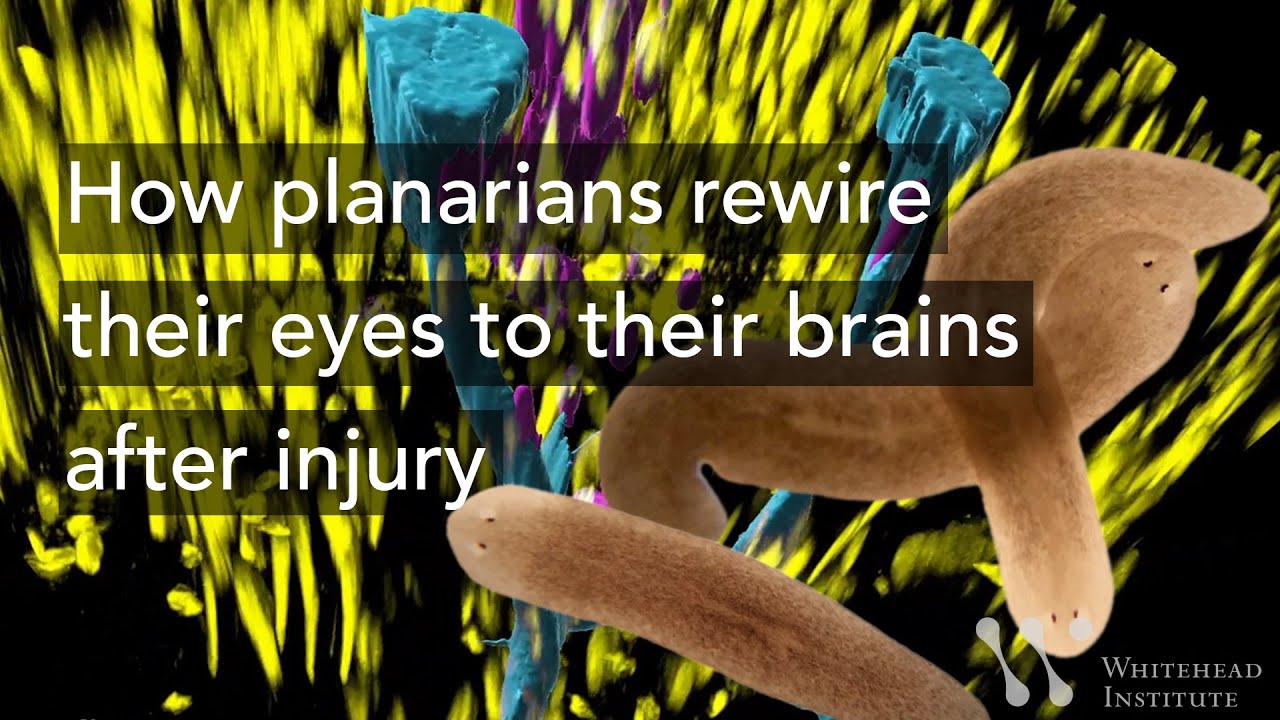 Schmidtea mediterranea's eyes are composed of light-capturing photoreceptor neurons connected to the brain with long, spindly processes called axons. They use their eyes to respond to light to help navigate their environment.

The worms, which are popular models for research into regeneration, can regrow pretty much any part of their body; eyes are an interesting part to study because regenerating the visual system requires the worms rewire their neurons to connect them to the brain.

When neural systems develop in embryos, the first nerve fibers, called pioneer axons, snake their way through tissue to form the circuitry needed to perceive and interpret external stimuli. The axons are helped along their way by specialized cells called guidepost cells. These special cells are positioned at choice points — places where the axon's path could fork in different directions.

In many organisms, these guidepost cells aren't a priority anymore once development is finished, and typically are not renewed through adulthood. That's one reason why, when humans experience brain or nerve damage, the injury is usually permanent.

“This is a fundamental mystery of regeneration that we hadn't even been thinking about,” says Reddien, the senior author of the paper who is also a professor of biology at MIT and an investigator with the Howard Hughes Medical Institute. “How can an adult animal regenerate a functional nervous system when the original development of the nervous system typically involves a number of cues that are thought to be transient?"

Then, in 2018, Reddien lab scientist Lucila Scimone found something surprising in adult planarians: groups of mysterious cells that looked like they might play a role in guiding growing axons. She'd noticed this group of cells because they co-expressed two genes not often seen together, and some were conspicuously close to the eyes.

“I was captivated by these cells,” she says. They appeared in very small numbers (a normal worm might have around five; a large one might have up to 10) in every planarian she examined. They were divided into two distinct groups: some around the flatworms' eyes, and others spaced out along the path to the brain center. When she traced the path of existing axons leading from the planarians' eyes to their brain, they coincided with the positions of these cells without exception.

When the researchers characterized the cells, they found that they did not express any of the genes that are hallmarks of photoreceptor neurons; instead, they had markers often found in muscle tissue. “That was very striking, because muscle cells — that's not what they do in most animals,” Scimone says.

In other organisms, guidepost cells are often neurons or glia. It would be unusual for muscle cells to serve as guideposts; but past work in the Reddien lab had shown that planarian muscle cells played other special roles, such as secreting the extracellular matrix. The researchers now wondered whether they could add the role of guidepost to the long list of planarian muscle cell functions.

To test their hypothesis, the researchers designed a series of experiments. “We developed an eye transplantation method where you can take an eye from an animal and transplant it into another animal,” says Reddien lab postdoc Kutay Deniz Atabay. “When you do this, the axonal projections from that eye will basically, if positioned appropriately, correctly wire themselves into the brain, producing a functional state.”

The researchers also created genetically engineered planarians that had the muscle cells, but no eyes, and then transplanted eyes onto their eyeless heads. Sure enough, the neurons grew as normal, snaking towards the cells and then adjusting their trajectories after encountering them.

Without the cells, it was a different story. When the researchers transplanted eyes to distant parts of planarians' bodies without a population of these muscle cells, the photoreceptor neurons did not connect to the brain center. Likewise, when they transplanted eyes into planarians that had been modified to not have these muscle cells, their photoreceptor neurons still grew — but they did not wire properly to reach the brain.

These findings combined suggested that the cells were fully independent of the visual system — they did not form because of eyes or photoreceptor neurons, but likely established themselves before the neurons grew — which provided more evidence for the guidepost role.

The guidepost-like activity of these cells then begged the question: how do the cells themselves know where to be? “We found that there's a pattern of signaling molecules in muscle that is setting where these cells should be,” Reddien says. “If we perturb the global positional information of the system, these cells get placed in the wrong positions, and then axons go to the wrong positions — so we think there's a positional information framework that places the cells during regeneration, and that allows them to work as guideposts in the correct locations.”

At this point, the researchers don't know exactly how the cells are able to communicate with growing axons to serve as guideposts. They could be releasing some sort of signaling molecule that attracts the axons, or they could be communicating by using trans-membrane proteins.

“That will be an exciting direction for the future,” Reddien says. “We have now identified the transcriptome for the cells, which means we know all the genes that these cells express. That provides us with an intriguing list of genes that can be probed functionally, to try to see which ones are mediating the functions of these cells.”

This study is a step forward in a body of work that aims to expand the capabilities of regenerative medicine. “Imagine a scenario where someone experiences a spinal cord injury or an eye injury or stroke that leads to the loss of a neural circuit,” says Atabay. “The reason we can't fully cure these cases today is that we lack fundamental information regarding how these systems can regenerate. Looking at regenerative organisms provides a lot of insights. From this case, we see that regenerating the lost system may not be enough; you may also need to regenerate systems that are properly patterning that system.”

A new study by MIT researchers explores how cellular guides in planarians appear to provide a roadmap for regeneration, reports Veronique Greenwood for The New York Times. Greenwood notes that the findings “may someday help scientists interested in helping humans regenerate injured neurons.”

In pursuit of the elusive stem cell

A blueprint for regeneration