Task Force 2021 and Beyond shares its initial compilation of ideas 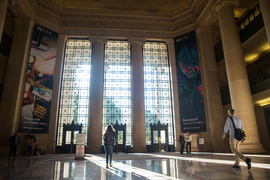 MIT’s Task Force 2021 and Beyond has released an initial menu of more than 50 ideas to reimagine and reposition the Institute for the post-Covid world.

Now, members of the MIT community are urged to review the proposals and weigh in — helping the task force and Institute leadership to focus, in the coming months, on beginning work to implement viable ideas that have broad support and impact.

The ideas are wide-ranging, touching upon reshaping the physical campus to harness the power of in-person interactions; helping students, faculty, and staff find rewarding paths at MIT; building equity and camaraderie as the full community prepares to reunite on campus; and expanding the Institute’s beneficial reach in the world.

Today’s public sharing of the proposals marks the end of the task force’s first phase. The group was charged by President L. Rafael Reif in May, and began its work in June under co-chairs Rick Danheiser and Sanjay Sarma.

Danheiser, chair of the faculty and Arthur C. Cope Professor of Chemistry, and Sarma, vice president for open learning and Fred Fort Flowers and Daniel Fort Flowers Professor of Mechanical Engineering, announced the release of the 50-some ideas in an email today to the MIT community. They invited further community feedback to help in continuing to refine and winnow the proposals.

Danheiser and Sarma wrote that the ideas emerged from a six-month, community-wide process that included over 100 meetings, consideration of more than 60 ideas submitted via a community idea bank, a community forum, presentations and discussions with various Institute committees and groups, and eight task force plenary sessions.

A broad range of proposals

The more than 50 ideas were submitted last month by the four workstreams and 11 working groups that make up the task force. Various submissions — any of which may or may not move forward into actual implementation — propose to:

The above is only a sampling of the full range of ideas now under consideration; the full list is available on the task force’s website.

Setting the stage for next steps

Beginning now and continuing through January, the task force will review and consider community feedback on the dozens of ideas released today.

This input will inform an in-depth review, in January and February, of the full range of proposals by President Reif, other Institute leaders, and key stakeholders, with an eye to focusing effort on those ideas that are likeliest to put MIT in a position of strength heading into a new post-Covid world.

This review and winnowing process will set the stage for a second phase of the task force’s work, which will involve developing implementation structures and processes for the subset of ideas that are prioritized by the Institute’s leadership. The task force expects to enter that next phase in February.

From our “new normal,” a “thriving new future”

Task Force 2021 and Beyond was charged by President Reif in May to “explore how MIT might invent a thriving new future,” starting in the new year. It arose from the realization that Covid-19 will force profound changes in how we all live, work, and learn — and that there may be no full return to the pre-Covid world.

Indeed, the global spread of Covid-19 during 2020 has quickly created a “new normal”: The pandemic has led to profound economic dislocations; rapidly accelerated the growth of telemedicine; forced a reconsideration of sustainability; and prompted sharp shifts in work and education, with billions worldwide now working and learning from home.

At MIT, Covid-19 holds the potential for lasting impacts on the endowment, government and industry support, and private philanthropy. The pandemic could have ongoing repercussions on the financial well-being of MIT’s students and their families, on the job market for MIT graduates, and on research directions and funding. Finally, the current state of affairs could have long-term effects on how MIT employees approach their work, and could launch higher education into a next phase of digital transformation, with profound impacts on both education and student life on residential campuses like MIT’s.

In his May 4 letter announcing the formation of Task Force 2021 and Beyond, President Reif likened the deep uncertainty of 2020 to that of World War II — a period of global disruption when the Institute underwent a spectacular transformation.

“As MIT helped the United States respond to the immediate threats of war, it invented a new future for itself,” he wrote. “By framing a productive new relationship between the federal government and research universities, MIT helped the nation come to see the advance of fundamental science as a core US strength ­— and established a lead role for itself in that work. World War II also turned MIT from a technical college with a handful of graduate students to a great research university. … In other words, the painful demands of that terrible war ultimately delivered much of what we now love about MIT.”

Letter to the community: Building a vision for MIT’s post-Covid future