Bringing the benefits of in-person collaboration to the virtual world 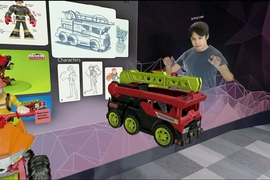 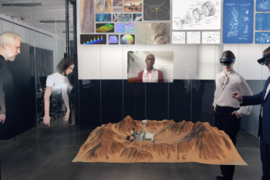 ↓ Download Image
Caption: The company has been working with design and innovation teams at large clients since its founding in 2016. Now, in response to the Covid-19 pandemic, Spatial has made the enterprise version of its platform free for everyone. It has also created a web browser version of the platform so users can enter spaces without a headset. This image shows another screenshot from Spatial.
Credits: Courtesy of Spatial

Caption:
The company has been working with design and innovation teams at large clients since its founding in 2016. Now, in response to the Covid-19 pandemic, Spatial has made the enterprise version of its platform free for everyone. It has also created a web browser version of the platform so users can enter spaces without a headset. This image shows another screenshot from Spatial.
Credits:
Courtesy of Spatial

Over the past few months, while many workers were adjusting to a newfound reliance on Zoom meetings and Slack messages, employees at companies including toy designer Mattel, banking giant BNP Paribas, and the multinational energy corporation Enel Group have been collaborating in shared spaces. They’ve been using whiteboards and sticky notes to organize ideas, and even finishing up work sessions with handshakes and high fives, all without the slightest concern of contracting Covid-19.

That’s because they’re meeting virtually on the platform of Spatial, a startup using augmented and virtual reality to improve remote collaboration. The platform works on most virtual reality headsets available today, simulating the experience of in-person meetings with life-like avatars, dynamic sound, and interactive controls. It also allows users to generate and manipulate content including 3D models, images, videos, and PDFs, with simple hand gestures and voice commands.

“Spatial is a collaborative, holographic, augmented reality solution,” Spatial co-founder and Chief Product Officer Jinha Lee SM ’11 says. “You can teleport to someone’s space, work as an avatar sharing that 3D space, and use it instead of a screen to manage a project, present an idea, and more.”

An example of Spatial's virtual workspaces.

The company has been working with design and innovation teams at large companies since its founding in 2016. Now, in response to the Covid-19 pandemic, Spatial has made the enterprise version of its platform free for everyone. It has also created a web browser version of the platform so users can enter spaces without a headset.

“Before coronavirus, most of our interest was from enterprise,” Lee says. “They were big companies interested in using Spatial to connect remote office spaces or review 3D models and large data sets and things like that. After coronavirus, interest went up 1,000 percent, and a big part of that was from smaller businesses, hospitals, schools, and individuals.”

The new offerings are part of Spatial’s long-term mission of accelerating a future where people can enjoy meaningful, productive interactions without sharing the same physical space.

Growing up in Korea, Lee describes himself as a wannabe artist, and he brought that perspective to the University of Tokyo, where he studied electrical engineering as an undergraduate.

“To me, the computer was really frustrating to use, because its 2D screen and mouse is kind of a frustrating tool as a creator when you want to express yourself by using gestures, or when you’re building things,’ Lee says. “A computer doesn’t capture human creativity well.”

Lee joined the Media Lab’s Tangible Media Group as a graduate student in 2009, where he worked on projects including a 3D interface that sits on a desk like a computer, and a fashionable wristwatch that uses a raised metal ball for an hour hand, allowing visually impaired people to feel the time display as easily as others can see it.

“[The watch project] was an opportunity for me to see that you can use your idea not only for research, but also to help people solve real problems in the world,” Lee remembers. “That was a big transitional moment for me.”

After leaving MIT, Lee worked at Samsung for four years, where he led its Interaction Group that created new user interfaces, including a platform that allows people to share content from their phones to nearby television screens in order to create things like song lists, photo albums, and maps of restaurants.

“That helped me confirm that the computer really has to be used by people, not a person,” Lee says. “It has to be collaborative.”

Following his experience at Samsung, Lee met Anand Agarawala, who had created BumpTop, an interface for organizing information on computer desktops similar to how one might store files on an office desk. The pair realized they shared a vision for improving virtual collaboration, and partnered up to create an augmented reality platform that used avatars to help simulate in person interactions.

The platform the founders created is designed to be easy to use while providing all the most important features of in person and online collaboration. To get started, users upload a photo of themselves that is used to generate a 3D avatar. From there, they can enter virtual workspaces with people from around the world, drawing on whiteboards, reviewing 3D objects, and sharing windows or apps from their computers.

Spatial works on all the major virtual reality headsets, including the Hololens, Oculus, and HTC Vive, leveraging their motion tracking and spatial audio features to simulate the experience of standing next to someone.

“When you can capture people’s creative expressions and gestures, it shortens the gap between what users think and what is visually in front of them,” Lee says.

Users can pull in files from their computer or use gestures, like holding two fingers in the air, with voice commands to search the internet, populating the virtual environment with web results.

Spatial’s platform has radically changed workflows for remote teams — an unfortunately large segment of the workforce at the moment.

“There’s a lot of Zoom fatigue right now, and I think the biggest reason why is because the video format really forces you to be 200 percent focused when you’re presenting or listening, but you can’t do something together,” Lee says. “You can’t be in this space, looking at things together and pointing at things. This feeling that we’re in the same space can only be achieved through a 3D physical office, and that’s some of what Spatial is trying to achieve in virtual form.”

Remote teams at Mattel, for example, traditionally used email and Slack messages to plan designs, then shipped 3D printed prototypes to multiple offices for review. With Spatial, workers can upload 3D models to their virtual workspace at any stage of the design process and invite different stakeholders to check them out. Reviewers can walk around the object and enlarge it during inspection, then leave comments and other markings for the team to consider.

The design and engineering industries make up a big part of Spatial’s customer base, but the company is also working with large financial institutions, biotechnology companies, and software companies in Silicon Valley.

Since making Spatial’s platform free, Lee says they’ve been getting a lot of interest from academic institutions looking for innovative ways to interact with students, and from hospitals trying to improve connections between doctors and patients.

Those interactions are much different from a product team’s design review, but they still benefit from Spatial’s personal virtual environment, which Lee thinks can aid creativity as well as collaboration.

“Creativity is about connecting dots — your thoughts — which could seem unimportant or random until they are connected with others,’” Lee says. “In Spatial, ideas can be shared with others much quicker than through video calls, and in much more raw form, through your gestures, notes, or drawings. In this way we are hoping to help remote teams stay creative as a group even when distributed.”