“She” goes missing from presidential language

Even when people believed Hillary Clinton would win the 2016 election, they did not use “she” to refer to the next president.
Listen
Anne Trafton | MIT News Office
Publication Date:
Press Inquiries 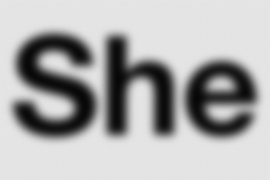 ↓ Download Image
Caption: A new study reveals that although a significant percentage of Americans believed Hillary Clinton would win the 2016 presidential election, people rarely used the pronoun “she” when referring to the next president.
Credits: Image: MIT News

Caption:
A new study reveals that although a significant percentage of Americans believed Hillary Clinton would win the 2016 presidential election, people rarely used the pronoun “she” when referring to the next president.
Credits:
Image: MIT News

Throughout most of 2016, a significant percentage of the American public believed that the winner of the November 2016 presidential election would be a woman — Hillary Clinton.

Strikingly, a new study from cognitive scientists and linguists at MIT, the University of Potsdam, and the University of California at San Diego shows that despite those beliefs, people rarely used the pronoun “she” when referring to the next U.S. president before the election. Furthermore, when reading about the future president, encountering the pronoun “she” caused a significant stumble in their reading.

“There seemed to be a real bias against referring to the next president as ‘she.’ This was true even for people who most strongly expected and probably wanted the next president to be a female,” says Roger Levy, an MIT professor of brain and cognitive sciences and the senior author of the new study. “There’s a systematic underuse of ‘she’ pronouns for these kinds of contexts. It was quite eye-opening.”

Levy suggests that sociopolitical context may account for at least some of the differences seen between the U.S. and the U.K.: At the time, Theresa May was prime minister and very strongly expected to win, plus many Britons likely remember the long tenure of former Prime Minister Margaret Thatcher.

“The situation was very different there because there was an incumbent who was a woman, and there is a history of referring to the prime minister as ‘she’ and thinking about the prime minster as potentially a woman,” he says.

Levy and his colleagues began their study in early 2016, planning to investigate how people’s expectations about world events, specifically, the prospect of a woman being elected president, would influence their use of language. They hypothesized that the strong possibility of a female president might override the implicit bias people have toward referring to the president as “he.”

“We wanted to use the 2016 electoral campaign as a natural experiment, to look at what kind of language people would produce or expect to hear as their expectations about who was likely to win the race changed,” Levy says.

Before beginning the study, he expected that people’s use of the pronoun “she” would go up or down based on their beliefs about who would win the election. He planned to explore how long would it take for changes in pronoun use to appear, and how much of a boost “she” usage would experience if a majority of people expected the next president to be a woman.

However, such a boost never materialized, even though Clinton was expected to win the election.

The researchers performed their experiment 12 times between June 2016 and January 2017, with a total of nearly 25,000 participants from the Amazon Mechanical Turk platform. The study included three tasks, and each participant was asked to perform one of them. The first task was to predict the likelihood of three candidates winning the election — Clinton, Donald Trump, or Bernie Sanders. From those numbers, the researchers could estimate the percentage of people who believed the next president would be a woman. This number was higher than 50 percent during most of the period leading up to the election, and reached just over 60 percent right before the election.

The next two tasks were based on common linguistics research methods — one to test people’s patterns of language production, and the other to test how the words they encounter affect their reading comprehension.

To test language production, the researchers asked participants to complete a paragraph such as “The next U.S. president will be sworn into office in January 2017. After moving into the Oval Office, one of the first things that ….”

In this task, about 40 percent of the participants ended up using a pronoun in their text. Early in the study period, more than 25 percent of those participants used “he,” fewer than 10 percent used “she,” and around 50 percent used “they.” As the election got closer, and Clinton’s victory seemed more likely, the percentage of “she” usage never went up, but usage of “they” climbed to about 60 percent. While these results indicate that the singular “they” has reached widespread acceptance as a de facto standard in contemporary English, they also suggest a strong persistent bias against using “she” in a context where the gender of the individual referred to is not yet known.

“After Clinton won the primary, by late summer, most people thought that she would win. Certainly Democrats, and especially female Democrats, thought that Clinton would win. But even in these groups, people were very reluctant to use ‘she’ to refer to the next president. It was never the case that ‘she’ was preferred over ‘he,’” Levy says.

For the third task, participants were asked to read a short passage about the next president. As the participants read the text on a screen, they had to press a button to reveal each word of the sentence. This setup allows the researchers to measure how quickly participants are reading. Surprise or difficulty in comprehension leads to longer reading times.

In this case, the researchers found that when participants encountered the pronoun “she” in a sentence referring to the next president, it cost them about a third of a second in reading time — a seemingly short amount of time that is nevertheless known from sentence processing research to indicate a substantial disruption relative to ordinary reading — compared to sentences that used “he.” This did not change over the course of the study.

The findings suggest that gender biases regarding the presidency are so deeply ingrained that they are extremely difficult to overcome even when people strongly believe that the next president will be a woman, Levy says.

“It was surprising that the stereotype that the U.S. president is always a man would so strongly influence language, even in this case, which offered the best possible circumstances for particularized knowledge about an upcoming event to override the stereotypes,” he says. “Perhaps it’s an association of different pronouns with positions of prestige and power, or it’s simply an overall reluctance to refer to people in a way that indicates they’re female if you’re not sure.”

The U.K. component of the study was conducted in June 2017 (before the election) and July 2017 (after the election but before Theresa May had successfully formed a government). Before the election, the researchers found that “she” was used about 25 percent of the time, while “he” was used less than 5 percent of the time. However, reading times for sentences referring to the prime minister as “she” were no faster than than those for “he,” suggesting that there was still some bias against “she” in comprehension relative to usage preferences, even in a country that already has a woman prime minister.

The type of gender bias seen in this study appears to extend beyond previously seen stereotypes that are based on demographic patterns, Levy says. For example, people usually refer to nurses as “she,” even if they don’t know the nurse’s gender, and more than 80 percent of nurses in the U.S. are female. In an ongoing study, von der Malsburg, Poppels, Levy, and recent MIT graduate Veronica Boyce have found that even for professions that have fairly equal representation of men and women, such as baker, “she” pronouns are underused.

“If you ask people how likely a baker is to be male or female, it’s about 50/50. But if you ask people to complete text passages that are about bakers, people are twice as likely to use he as she,” Levy says. “Embedded within the way that we use pronouns to talk about individuals whose identities we don’t know yet, or whose identities may not be definitive, there seems to be this systematic underconveyance of expectations for female gender.”

The research was funded by the National Institutes of Health, a Feodor Lynen Research Fellowship from the Alexander von Humboldt Foundation, and an Alfred P. Sloan Fellowship.

New York Times reporter Jessica Bennett writes that a study by MIT researchers finds during the run-up to the 2016 election, Americans were reluctant to use the word “she” to describe a hypothetical president. “People had difficulties reading ‘she’ even if the text had previously used ‘she,’ showing how persistent and deeply ingrained this bias is,” explains Prof. Roger Levy.