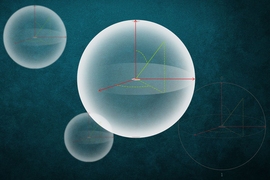 Caption:
An MIT team found a way to “recruit” normally disruptive quantum bits (qubits) in diamond to, instead, help carry out quantum operations. This approach could be used to help scale up quantum computing systems.
Credits:
Image: Christine Daniloff, MIT

In an advance that may help researchers scale up quantum devices, an MIT team has developed a method to “recruit” neighboring quantum bits made of nanoscale defects in diamond, so that instead of causing disruptions they help carry out quantum operations.

Quantum devices perform operations using quantum bits, called “qubits,” that can represent the two states corresponding to classic binary bits — a 0 or 1 — or a “quantum superposition” of both states simultaneously. The unique superposition state can enable quantum computers to solve problems that are practically impossible for classical computers, potentially spurring breakthroughs in biosensing, neuroimaging, machine learning, and other applications.

One promising qubit candidate is a defect in diamond, called a nitrogen-vacancy (NV) center, which holds electrons that can be manipulated by light and microwaves. In response, the defect emits photons that can carry quantum information. Because of their solid-state environments, however, NV centers are always surrounded by many other unknown defects with different spin properties, called “spin defects.” When the measurable NV-center qubit interacts with those spin defects, the qubit loses its coherent quantum state — “decoheres”— and operations fall apart. Traditional solutions try to identify these disrupting defects to protect the qubit from them.

In a paper published Feb. 25 in Physical Letters Review, the researchers describe a method that uses an NV center to probe its environment and uncover the existence of several nearby spin defects. Then, the researchers can pinpoint the defects’ locations and control them to achieve a coherent quantum state — essentially leveraging them as additional qubits.

In experiments, the team generated and detected quantum coherence among three electronic spins — scaling up the size of the quantum system from a single qubit (the NV center) to three qubits (adding two nearby spin defects). The findings demonstrate a step forward in scaling up quantum devices using NV centers, the researchers say.

“You always have unknown spin defects in the environment that interact with an NV center. We say, ‘Let’s not ignore these spin defects, which [if left alone] could cause faster decoherence. Let’s learn about them, characterize their spins, learn to control them, and ‘recruit’ them to be part of the quantum system,’” says the lead co-author Won Kyu Calvin Sun, a graduate student in the Department of Nuclear Science and Engineering and a member of the Quantum Engineering group. “Then, instead of using a single NV center [or just] one qubit, we can then use two, three, or four qubits.”

NV centers occur where carbon atoms in two adjacent places in a diamond’s lattice structure are missing — one atom is replaced by a nitrogen atom, and the other space is an empty “vacancy.” The NV center essentially functions as an atom, with a nucleus and surrounding electrons that are extremely sensitive to tiny variations in surrounding electrical, magnetic, and optical fields. Sweeping microwaves across the center, for instance, makes it change, and thus control, the spin states of the nucleus and electrons.

Spins are measured using a type of magnetic resonance spectroscopy. This method plots the frequencies of electron and nucleus spins in megahertz as a “resonance spectrum” that can dip and spike, like a heart monitor. Spins of an NV center under certain conditions are well-known. But the surrounding spin defects are unknown and difficult to characterize.

In their work, the researchers identified, located, and controlled two electron-nuclear spin defects near an NV center. They first sent microwave pulses at specific frequencies to control the NV center. Simultaneously, they pulse another microwave that probes the surrounding environment for other spins. They then observed the resonance spectrum of the spin defects interacting with the NV center.

The spectrum dipped in several spots when the probing pulse interacted with nearby electron-nuclear spins, indicating their presence. The researchers then swept a magnetic field across the area at different orientations. For each orientation, the defect would “spin” at different energies, causing different dips in the spectrum. Basically, this allowed them to measure each defect’s spin in relation to each magnetic orientation. They then plugged the energy measurements into a model equation with unknown parameters. This equation is used to describe the quantum interactions of an electron-nuclear spin defect under a magnetic field. Then, they could solve the equation to successfully characterize each defect.

After characterizing the defects, the next step was to characterize the interaction between the defects and the NV, which would simultaneously pinpoint their locations. To do so, they again swept the magnetic field at different orientations, but this time looked for changes in energies describing the interactions between the two defects and the NV center. The stronger the interaction, the closer they were to one another. They then used those interaction strengths to determine where the defects were located, in relation to the NV center and to each other. That generated a good map of the locations of all three defects in the diamond.

Characterizing the defects and their interaction with the NV center allow for full control, which involves a few more steps to demonstrate. First, they pump the NV center and surrounding environment with a sequence of pulses of green light and microwaves that help put the three qubits in a well-known quantum state. Then, they use another sequence of pulses that ideally entangles the three qubits briefly, and then disentangles them, which enables them to detect the three-spin coherence of the qubits.

The researchers verified the three-spin coherence by measuring a major spike in the resonance spectrum. The measurement of the spike recorded was essentially the sum of the frequencies of the three qubits. If the three qubits for instance had little or no entanglement, there would have been four separate spikes of smaller height.

“We come into a black box [environment with each NV center]. But when we probe the NV environment, we start seeing dips and wonder which types of spins give us those dips. Once we [figure out] the spin of the unknown defects, and their interactions with the NV center, we can start controlling their coherence,” Sun says. “Then, we have full universal control of our quantum system.”

Next, the researchers hope to better understand other environmental noise surrounding qubits. That will help them develop more robust error-correcting codes for quantum circuits. Furthermore, because on average the process of NV center creation in diamond creates numerous other spin defects, the researchers say they could potentially scale up the system to control even more qubits. “It gets more complex with scale. But if we can start finding NV centers with more resonance spikes, you can imagine starting to control larger and larger quantum systems,” Sun says.