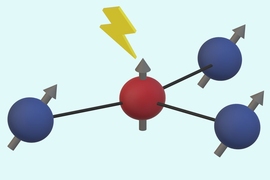 ↓ Download Image
Caption: In a diamond crystal, three carbon atom nuclei (shown in blue) surround an empty spot called a nitrogen vacancy center, which behaves much like a single electron (shown in red). The carbon nuclei act as quantum bits, or qubits, and it turns out the primary source of noise that disturbs them comes from the jittery “electron” in the middle. By understanding the single source of that noise, it becomes easier to compensate for it, the researchers found.
Credits: Image: David Layden

Caption:
In a diamond crystal, three carbon atom nuclei (shown in blue) surround an empty spot called a nitrogen vacancy center, which behaves much like a single electron (shown in red). The carbon nuclei act as quantum bits, or qubits, and it turns out the primary source of noise that disturbs them comes from the jittery “electron” in the middle. By understanding the single source of that noise, it becomes easier to compensate for it, the researchers found.
Credits:
Image: David Layden

Labs around the world are racing to develop new computing and sensing devices that operate on the principles of quantum mechanics and could offer dramatic advantages over their classical counterparts. But these technologies still face several challenges, and one of the most significant is how to deal with “noise” — random fluctuations that can eradicate the data stored in such devices.

A new approach developed by researchers at MIT could provide a significant step forward in quantum error correction. The method involves fine-tuning the system to address the kinds of noise that are the most likely, rather than casting a broad net to try to catch all possible sources of disturbance.

The analysis is described in the journal Physical Review Letters, in a paper by MIT graduate student David Layden, postdoc Mo Chen, and professor of nuclear science and engineering Paola Cappellaro.

“The main issues we now face in developing quantum technologies are that current systems are small and noisy,” says Layden. Noise, meaning unwanted disturbance of any kind, is especially vexing because many quantum systems are inherently highly sensitive, a feature underlying some of their potential applications.

And there’s another issue, Layden says, which is that quantum systems are affected by any observation. So, while one can detect that a classical system is drifting and apply a correction to nudge it back, things are more complicated in the quantum world. “What's really tricky about quantum systems is that when you look at them, you tend to collapse them,” he says.

Classical error correction schemes are based on redundancy. For example, in a communication system subject to noise, instead of sending a single bit (1 or 0), one might send three copies of each (111 or 000). Then, if the three bits don’t match, that shows there was an error. The more copies of each bit get sent, the more effective the error correction can be.

The same essential principle could be applied to adding redundancy in quantum bits, or “qubits.” But, Layden says, “If I want to have a high degree of protection, I need to devote a large part of my system to doing these sorts of checks. And this is a nonstarter right now because we have fairly small systems; we just don’t have the resources to do particularly useful quantum error correction in the usual way.” So instead, the researchers found a way to target the error correction very narrowly at the specific kinds of noise that were most prevalent.

The quantum system they’re working with consists of carbon nuclei near a particular kind of defect in a diamond crystal called a nitrogen vacancy center. These defects behave like single, isolated electrons, and their presence enables the control of the nearby carbon nuclei.

But the team found that the overwhelming majority of the noise affecting these nuclei came from one single source: random fluctuations in the nearby defects themselves. This noise source can be accurately modeled, and suppressing its effects could have a major impact, as other sources of noise are relatively insignificant.

“We actually understand quite well the main source of noise in these systems,” Layden says. “So we don't have to cast a wide net to catch every hypothetical type of noise.”

The team came up with a different error correction strategy, tailored to counter this particular, dominant source of noise. As Layden describes it, the noise comes from “this one central defect, or this one central ‘electron,’ which has a tendency to hop around at random. It jitters.”

That jitter, in turn, is felt by all those nearby nuclei, in a predictable way that can be corrected.

“The upshot of our approach is that we’re able to get a fixed level of protection using far fewer resources than would otherwise be needed,” he says. “We can use a much smaller system with this targeted approach.”

The work so far is theoretical, and the team is actively working on a lab demonstration of this principle in action. If it works as expected, this could make up an important component of future quantum-based technologies of various kinds, the researchers say, including quantum computers that could potentially solve previously unsolvable problems, or quantum communications systems that could be immune to snooping, or highly sensitive sensor systems.

“This is a component that could be used in a number of ways,” Layden says. “It’s as though we’re developing a key part of an engine. We’re still a ways from building a full car, but we’ve made progress on a critical part.”

"Quantum error correction is the next challenge for the field," says Alexandre Blais, a professor of physics at the University of Sherbrooke, in Canada, who was not associated with this work. "The complexity of current quantum error correcting codes is, however, daunting as they require a very large number of qubits to robustly encode quantum information."

Blais adds, "We have now come to realize that exploiting our understanding of the devices in which quantum error correction is to be implemented can be very advantageous. This work makes an important contribution in this direction by showing that a common type of error can be corrected for in a much more efficient manner than expected. For quantum computers to become practical we need more ideas like this.​"

The research was supported by the U.S. Army Research Office and the National Science Foundation.