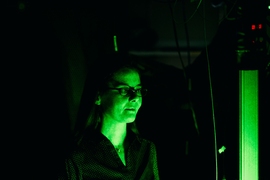 ↓ Download Image
Caption: “Instead of having a classical controller to implement the feedback, we now use a quantum controller,” Paola Cappellaro (pictured) explains. “Because the controller is quantum, I don’t need to do a measurement to know what’s going on.”
Credits: Photo: Jose Mandojana

Caption:
Researchers have designed a feedback-control system for maintaining quantum superposition that requires no measurement. Masashi Hirose (pictured) adjusts optical components on the the setup used to perform the experiment.

Caption:
“Instead of having a classical controller to implement the feedback, we now use a quantum controller,” Paola Cappellaro (pictured) explains. “Because the controller is quantum, I don’t need to do a measurement to know what’s going on.”

Quantum computers are largely hypothetical devices that could perform some calculations much more rapidly than conventional computers can. They exploit a property called superposition, which describes a quantum particle’s counterintuitive ability to, in some sense, inhabit more than one physical state at the same time.

But superposition is fragile, and finding ways to preserve it is one of the chief obstacles to developing large, general-purpose quantum computers. In today’s Nature, MIT researchers describe a new approach to preserving superposition in a class of quantum devices built from synthetic diamonds. The work could ultimately prove an important step toward reliable quantum computers.

In most engineering fields, the best way to maintain the stability of a physical system is feedback control. You make a measurement — the current trajectory of an airplane, or the temperature of an engine — and on that basis produce a control signal that nudges the system back toward its desired state.

The problem with using this technique to stabilize a quantum system is that measurement destroys superposition. So quantum-computing researchers have traditionally had to do without feedback.

“Typically, what people do is to use what’s called open-loop control,” says Paola Cappellaro, the Esther and Harold Edgerton Associate Professor of Nuclear Science and Engineering at MIT and senior author on the new paper. “You decide a priori how to control your system and then apply your controller and hope for the best — that you knew enough about your system that the control you applied will do what you thought it should. Feedback should be more robust, because it lets you adapt to what’s going wrong.”

In the Nature paper, Cappellaro and her former PhD student Masashi Hirose, who graduated last year and is now with McKinsey and Company in Tokyo, describe a feedback-control system for maintaining quantum superposition that requires no measurement. “Instead of having a classical controller to implement the feedback, we now use a quantum controller,” Cappellaro explains. “Because the controller is quantum, I don’t need to do a measurement to know what’s going on.”

Cappellaro and Hirose’s system uses a so-called nitrogen-vacancy center in diamond. A pure diamond consists of carbon atoms arranged in a regular latticework structure. If a carbon nucleus is missing from the lattice where one would be expected, that’s a vacancy. If a nitrogen atom takes the place of a carbon atom in the lattice, and it happens to be adjacent to a vacancy, that’s a nitrogen-vacancy (NV) center.

Associated with every NV center is a group of electrons from the adjacent atoms, which, like all electrons, have a property called spin that describes their magnetic orientation. When subjected to a strong magnetic field — from, say, a permanent magnet positioned above the diamond — an NV center’s electronic spin can be up, down, or a quantum superposition of the two. It can thus represent a quantum bit, or “qubit,” which differs from an ordinary computer bit in its ability to take on not just the values 1 or 0, but both at the same time.

NV centers have several advantages over other candidate qubits. They’re an intrinsic feature of a physical structure, so they dispense with the complex hardware for trapping ions or atoms that other approaches require. And NV centers are natural light emitters, which makes it relatively easy to read information from them. Indeed, the light particles emitted by an NV center may themselves be in superposition, so they provide a way to move quantum information around.

A second, lower-power dose of microwaves “entangles” the spins of the nitrogen nucleus and the NV center, so that they become dependent on each other. At this point, the NV qubit could, together with other qubits, be enlisted to perform a computation. But in their experiments, Cappellaro and Hirose were evaluating a single qubit, so they could test only the most rudimentary computational operation: the not gate, which flips a bit’s value.

After the computation is performed, a third dose of microwaves — whose polarization is rotated relative to that of the second — disentangles the nucleus and the NV center. The researchers then subject the system to a final sequence of microwave exposures. Those exposures are calibrated, however, so that their effect on the NV center depends on the state of the nitrogen nucleus. If an error crept in during the computation, the microwaves will correct it; if not, they’ll leave the NV center’s state unaltered.

In experiments, the researchers found that, with their feedback-control system, an NV-center quantum bit would stay in superposition about 1,000 times as long as it would without it.

“[Cappellaro] sheds light on a method, coherent feedback, which was discussed in the literature, in theory, a while back but has never been experimentally explored,” says Jörg Wrachtrup, a physics professor at the University of Stuttgart, in Germany. “What is extremely good in there is that she’s showing — once you do it right, and once you find the right algorithm, which she did — how easy it is in the end to protect the electron spin against spin flip or dephasing.”

“The main advantage of this technique compared to previously reported results, like protection of spin using echoes, is robustness against noise,” adds Fedor Jelezko, a physics professor at Ulm University, in Germany. “The technique demonstrated by the Cappellaro group is less sensitive to the time scale of the noise. I believe that applications of this technique will appear soon, as demonstrations of new protocols applied to quantum metrology and quantum computing.”