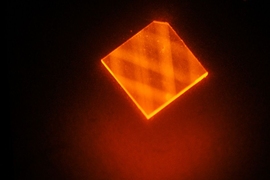 ↓ Download Image
Caption: In this image, laser light enters a synthetic diamond from a facet at its corner and bounces around inside the diamond until its energy is exhausted. This excites "nitrogen vacancies" that can be used to measure magnetic fields.

Caption:
In this image, laser light enters a synthetic diamond from a facet at its corner and bounces around inside the diamond until its energy is exhausted. This excites "nitrogen vacancies" that can be used to measure magnetic fields.
Credits:
image: H. Clevenson/MIT Lincoln Laboratory

MIT researchers have developed a new, ultrasensitive magnetic-field detector that is 1,000 times more energy-efficient than its predecessors. It could lead to miniaturized, battery-powered devices for medical and materials imaging, contraband detection, and even geological exploration.

Magnetic-field detectors, or magnetometers, are already used for all those applications. But existing technologies have drawbacks: Some rely on gas-filled chambers; others work only in narrow frequency bands, limiting their utility.

Synthetic diamonds with nitrogen vacancies (NVs) — defects that are extremely sensitive to magnetic fields — have long held promise as the basis for efficient, portable magnetometers. A diamond chip about one-twentieth the size of a thumbnail could contain trillions of nitrogen vacancies, each capable of performing its own magnetic-field measurement.

The problem has been aggregating all those measurements. Probing a nitrogen vacancy requires zapping it with laser light, which it absorbs and re-emits. The intensity of the emitted light carries information about the vacancy’s magnetic state.

The MIT researchers report their new device in the latest issue of Nature Physics. First author on the paper is Hannah Clevenson, a graduate student in electrical engineering who is advised by senior authors Englund and Danielle Braje, a physicist at MIT Lincoln Laboratory. They’re joined by Englund’s students Matthew Trusheim and Carson Teale (who’s also at Lincoln Lab) and by Tim Schröder, a postdoc in MIT’s Research Laboratory of Electronics.

When a light particle — a photon — strikes an electron in a nitrogen vacancy, it kicks it into a higher energy state. When the electron falls back down into its original energy state, it may release its excess energy as another photon. A magnetic field, however, can flip the electron’s magnetic orientation, or spin, increasing the difference between its two energy states. The stronger the field, the more spins it will flip, changing the brightness of the light emitted by the vacancies.

Making accurate measurements with this type of chip requires collecting as many of those photons as possible. In previous experiments, Clevenson says, researchers often excited the nitrogen vacancies by directing laser light at the surface of the chip.

“Only a small fraction of the light is absorbed,” she says. “Most of it just goes straight through the diamond. We gain an enormous advantage by adding this prism facet to the corner of the diamond and coupling the laser into the side. All of the light that we put into the diamond can be absorbed and is useful.”

The researchers calculated the angle at which the laser beam should enter the crystal so that it will remain confined, bouncing off the sides — like a tireless cue ball ricocheting around a pool table — in a pattern that spans the length and breadth of the crystal before all of its energy is absorbed.

“You can get close to a meter in path length,” Englund says. “It’s as if you had a meter-long diamond sensor wrapped into a few millimeters.” As a consequence, the chip uses the pump laser’s energy 1,000 times as efficiently as its predecessors did.

Because of the geometry of the nitrogen vacancies, the re-emitted photons emerge at four distinct angles. A lens at one end of the crystal can collect 20 percent of them and focus them onto a light detector, which is enough to yield a reliable measurement.

“What’s cool about this is that they’re using the sample itself kind of like a waveguide, to bounce the light around,” he continues. “Their sample is quite small. Because the laser doesn’t have to be anything particularly special, that could be small, too. So you could envision very small magnetometers. And correspondingly, you could make them very cheap.”

“From a Navy perspective,” he adds, “we talk about throwaway magnetometers a lot, where you might be flying over some area of the ocean and you want to make some measurements, so you just throw a handful of these out. If you get a really high-sensitivity magnetometer that’s really cheap, that would be one really good application for it.”