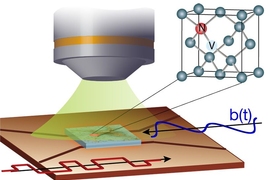 Caption:
A single nitrogen-vacancy (N-V) center in diamond (right, inset), optically initialized and readout by confocal microscopy, is manipulated with coherent control sequences (red line) of microwave pulses. This measures the arbitrary profile of time-varying magnetic fields radiated by biological sources (or by artificial sources in the researchers' proof-of-principle experiment).

Diamonds may be a girl’s best friend, but they could also one day help us understand how the brain processes information, thanks to a new sensing technique developed at MIT.

A team in MIT’s Quantum Engineering Group has developed a new method to control nanoscale diamond sensors, which are capable of measuring even very weak magnetic fields. The researchers present their work this week in the journal Nature Communications.

The new control technique allows the tiny sensors to monitor how these magnetic fields change over time, such as when neurons in the brain transmit electrical signals to each other. It could also enable researchers to more precisely measure the magnetic fields produced by novel materials such as the metamaterials used to make superlenses and “invisibility cloaks.”

In 2008 a team of researchers from MIT, Harvard University, and other institutions first revealed that nanoscale defects inside diamonds could be used as magnetic sensors.

The naturally occurring defects, known as nitrogen-vacancy (N-V) centers, are sensitive to external magnetic fields, much like compasses, says Paola Cappellaro, the Esther and Harold Edgerton Associate Professor of Nuclear Science and Engineering (NSE) at MIT.

Defects inside diamonds are also known as color centers, Cappellaro says, as they give the gemstones a particular hue: “So if you ever see a nice diamond that is blue or pink, the color is due to the fact that there are defects in the diamond.”

The N-V center defect consists of a nitrogen atom in place of a carbon atom and next to a vacancy — or hollow — within the diamond’s lattice structure. Many such defects within a diamond would give the gemstone a pink color, and when illuminated with light they emit a red light, Cappellaro says.

To develop the new method of controlling these sensors, Cappellaro’s team first probed the diamond with green laser light until they detected a red light being emitted, which told them exactly where the defect was located.

They then applied a microwave field to the nanoscale sensor, to manipulate the electron spin of the N-V center. This alters the intensity of light emitted by the defect, to a degree that depends not only on the microwave field but also on any external magnetic fields present.

To measure external magnetic fields and how they change over time, the researchers targeted the nanoscale sensor with a microwave pulse, which switched the direction of the N-V center’s electron spin, says team member and NSE graduate student Alexandre Cooper. By applying different series of these pulses, acting as filters — each of which switched the direction of the electron spin a different number of times — the team was able to efficiently collect information about the external magnetic field.

The team used a square of diamond three millimeters in diameter as their sample, but it is possible to use sensors that are only tens of nanometers in size. The diamond sensors can be used at room temperature, and since they consist entirely of carbon, they could be injected into living cells without causing them any harm, Cappellaro says.

One possibility would be to grow neurons on top of the diamond sensor, to allow it to measure the magnetic fields created by the “action potential,” or signal, they produce and then transmit to other nerves.

Previously, researchers have used electrodes inside the brain to “poke” a neuron and measure the electric field produced. However, this is a very invasive technique, Cappellaro says. “You don’t know if the neuron is still behaving as it would have if you hadn’t done anything,” she says.

Instead, the diamond sensor could measure the magnetic field noninvasively. “We could have an array of these defect centers to probe different locations on the neuron, and then you would know how the signal propagates from one position to another one in time,” Cappellaro says.

In experiments to demonstrate their sensor, the team used a waveguide as an artificial neuron and applied an external magnetic field. When they placed the diamond sensor on the waveguide, they were able to accurately reconstruct the magnetic field. Mikhail Lukin, a professor of physics at Harvard, says the work demonstrates very nicely the ability to reconstruct time-dependent profiles of weak magnetic fields using a novel magnetic sensor based on quantum manipulation of defects in diamond.

“Someday techniques demonstrated in this work may enable us to do real-time sensing of brain activity and to learn how they work,” says Lukin, who was not involved in this research. “Potential far-reaching implications may include detection and eventual treatment of brain diseases, although much work remains to be done to show if this actually can be done,” he adds.