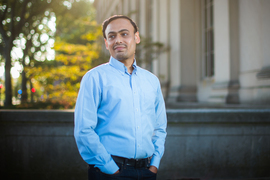 Early on in his studies, starting in India and then in the U.S., Saurabh Amin became fascinated by bringing principles from mathematical systems theory to bear on the real-world systems that we all rely on — in particular, transportation, electricity, and water infrastructure — and how to make them more resilient.

As the types of disruptions facing these systems, from natural disasters to security attacks, become more frequent and diverse, a proactive approach to monitoring and controlling these systems becomes all the more important.

Amin started to work on infrastructure systems as an undergraduate at the Indian Institute of Technology at Roorkee, India’s oldest technology institute. Citing other alumni who came before him and contributed to important civil engineering projects around the world, he says, “I was fortunate to study there. I think our curriculum actually had a very good balance” between real-world engineering applications and theoretical understanding of core concepts.

Inspired by this balance of theory and applications, Amin decided to study transportation systems at the University of Texas at Austin for his masters. He then earned his PhD in systems engineering at the University of California at Berkeley, where he delved into control theory, machine learning, and robotics — areas that have all come together in his more recent research. He now applies these tools to his analyses of different failure mechanisms and pathways, including how to guard infrastructure systems against problems caused by aging, natural disasters, or deliberate malicious action.

“There are a lot of commonalities among these networks — they are built and operated by human actors, but their functionality is governed by physical laws. So, that is what drives me forward,” Amin says.

He seeks “to develop a rigorous theoretical foundation of the resilience of infrastructures, to come at it from different angles, and to understand which kind of network failures are difficult or easy to analyze, or to defend against.”

Amin received an offer for an assistant professor position at MIT while he was still finishing his doctoral work at Berkeley. He had met his wife, Richa Sharma, under MIT’s Great Dome during an earlier research visit at the Institute, where she was completing a doctorate in chemical engineering. But just as he was about to move to Cambridge, she received a postdoc position at Lawrence Berkeley Laboratory.

“So we exchanged zip codes for a couple of years, before she moved back here again,” he says. Sharma now works at Schlumberger Doll Research on developing new sensor technologies with a specific focus on carbon dioxide. Both share a strong interest of using technology to develop more sustainable solutions. They now have two children, a girl and a boy, ages 6 and 3.

Amin joined the MIT faculty in 2012. “Coming to MIT from Berkeley, they are somewhat different cultures, but very similar academic environments for cross-disciplinary research,” he says. In 2019, Amin earned tenure in the Department of Civil and Environmental Engineering, where he teaches classes including 1.208 (Resilient Networks) and 1.020 (Engineering Sustainability: Analysis and Design). Recently, he launched a new first-year discovery subject, 1.008 (Engineering Solutions to Societal Challenges).

His research at MIT has continued to apply principles of systems theory, including game theory and optimization, to determine the best ways to maintain resiliency in systems. “The angle which I have pursued is of applied theory, applied in the sense that I draw my hypotheses and models, which are in these areas of transportation, electricity, and water,” Amin says. “Then I consider various kinds of failure situations, from attacks to failures resulting from natural events or disasters.”

In 2020, Amin started to pursue two new collaborative projects: one on pandemic-resilient urban mobility and another on hurricane-resilient smart grid operations.

To assess such correlated disruption scenarios, he finds ways to abstract these problems into mathematical representations, using methods developed in systems and control theory, optimization, and game theory. That then allows him to use tools developed by these disciplines to develop new ways to understand the potential failure mechanisms in infrastructure systems and propose solutions to plan for and respond to them.

Part of the analysis involves studying the best ways of allocating limited resources when restoring vital water, power, and transportation systems, for example after a hurricane or earthquake has caused multiple simultaneous failures over a wide area. Key questions include: Where are the key points where sensor systems should be installed, and which shutoffs and switches can best provide system resilience under different scenarios? What type of response capabilities are needed to restore the system functionality as quickly as possible?

Using game theory in this work, he says, “to me is a nice interplay between the way in which the humans, as operators of infrastructures and users of infrastructures, or even as the attackers to these infrastructures, would behave and interact with this network. And how, on the other hand, the sensing and control systems, which is a more of an automated part, not the human part, can be implemented to make it more robust.”

This approach of marrying control theory and optimization and game theory principles with traditional civil engineering systems is what brought Amin to his current position. “The reason why I got the job at MIT, I think, was because of this new approach to cyber-enabled infrastructure resilience that I wanted to develop,” he says.

In integrating these disciplines, “I need to be rigorous in terms of the mathematical proofs that these disciplines provide, and in terms of the performance guarantees that we must provide even under the face of disruptions. Importantly, these guarantees also need to be translated back to something implementable, which is of direct value to the operators or the managers of infrastructures and the large number of users who rely on the services offered by them.”

“Being able to make small steps to address this challenge, by way of teaching and research, is what excites me about my job the most,” he says.

Saurabh Amin to be chief scientist on multi-institutional NSF grant