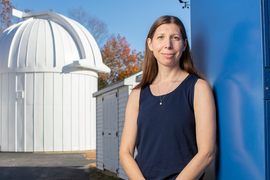 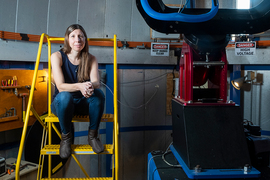 In early February, Kerri Cahoy packed up her family and caravanned with students from her lab, driving eight hours south of Boston to Wallops Island, Virginia. There, the group watched a backpack-sized spacecraft launch into space aboard an Antares rocket.

Inside the small probe, named DeMi, was a deformable mirror payload that Cahoy and her students designed, along with a miniature telescope and laser test source. DeMi’s mirror corrects the positioning of either the test laser or a star seen by the telescope. On future missions, these mirrors could be used to produce sharper images of distant stars and exoplanets. Showing the mirror can operate successfully in space is also proof that “nanosatellites” like DeMi can serve as nimble, affordable technology stepping-stones in the search for Earth-like planets beyond our solar system.

Just a few weeks later, MIT began scaling back its campus operations in response to the Covid-19 pandemic. In addition to the challenges of teaching her students remotely while caring for young children at home, Cahoy and her team had to find a way to safely operate a ground station at MIT to communicate with DeMi in space.

She and her students managed to remotely run a ground station on the roof of Building 37, and in July, after a nailbiting week of radio silence, the receiver finally picked up the satellite’s signals.

“It had just gone over MIT, almost to the edge of the horizon, and we thought it was another failed pass,” Cahoy says. “But then we saw there were data packets received, and we all got excited.”

Over the next year, she and her team will analyze DeMi’s data to see how well its mirror focuses the telescope’s images. Cahoy, who heads up the MIT Space Telecommunications, Astronomy, and Radiation (STAR) Lab, is also developing a small fleet of other technology demonstration nanosatellites, with the goal of reducing the cost and risk of space exploration, improving communications, and weather monitoring.

She was awarded tenure in MIT’s Department of Aeronautics and Astronautics (AeroAstro) in 2019, and has a joint appointment in the Department of Earth, Atmospheric and Planetary Sciences.

Cahoy grew up in the suburbs of New Haven, Connecticut, where her father was a factory repairman, and her mother stayed at home taking care of Cahoy and her younger siblings, before later returning to teaching.

“Things were tight at times, but they gave their kids everything,” says Cahoy, who remembers being her dad’s “right-hand man,” eager to help with his many hands-on electrical and mechanical home projects.

In middle school, a teacher took her aside after class one day to ask whether she had considered applying to a local, more academically challenging private school.

“She drove me to the admissions office to pick up an application, and then drove to my house, sat in the kitchen with me until my parents came home, and gave them a piece of her mind as to why I should apply and go,” Cahoy says.

Her parents were supportive, and after securing financial aid Cahoy enrolled at the new school, where she further developed her interests in the sciences. She then headed to Cornell University, where she majored in electrical engineering — a choice that was inspired by her father, who was a licensed electrician, though he did not have a college degree himself.

Walking through the engineering department one day at college, Cahoy spotted an advertisement for undergraduates to work on NASA’s Mars Exploration Rover mission, which aimed to land two rovers on Mars. The mission was led by Cornell professor Steve Squyres, who had boundless enthusiasm for the work and for the people in his group.

“It was a very positive environment, where he genuinely cared about the work and stayed upbeat, and just tried to get things done,” Cahoy recalls. “People who are in aerospace I think are able to stay optimistic, even when things don’t work or even fail miserably.”

The rovers were a success beyond expectation, landing on Mars in 2004, where they continued exploring the surface, years after their planned 90-day missions. For Cahoy, the experience of working on the project catalyzed a lifelong interest in space exploration and positive collaboration.

In 2000, she headed west to Stanford University, where she earned a PhD in electrical engineering, studying ways in which satellite radio signals could be used to characterize weather on other planets, like Mars.

Around that time, Professor Robert Twiggs of Stanford and Professor Jordi Puig-Suari of California Polytechnic State University first proposed the idea of CubeSats — shoebox-sized satellites that were a fraction of cost of conventional satellites.

The CubeSat was then used mostly as a hands-on design-and-build project for students. It was another 10 years before engineers considered CubeSats as useful operational spacecraft. “The whole idea took time to get rolling,” says Cahoy, who kept CubeSats in mind as she graduated, and began a two-year postdoc at NASA Ames Research Center, where she helped design instrumentation for another exciting, emerging field: the search for exoplanets.

In 2010, Cahoy moved back east to be closer to her mother, who was terminally ill. Her husband, an MD/PhD student, had applied to residencies in Boston and Maryland. As they waited to hear where he would land, Cahoy heard from Maria Zuber, MIT’s vice president of research, who at the time was heading up NASA’s GRAIL mission to send twin spacecraft to the moon to map its gravity field. Zuber offered Cahoy a postdoc position, which she could take on either at NASA Goddard Space Flight Center in Maryland, or at MIT.

Cahoy initially chose the former, as her husband accepted a residency in Maryland. But months earlier, she had also applied for a faculty position in MIT’s AeroAstro department. “We were driving across the country to Baltimore when I got the call with the offer from MIT,” Cahoy recalls.

After a whirwind of two-body problem-solving, Cahoy accepted the position, and started as an assistant professor at MIT in July 2011. When GRAIL launched later that September, she was able to attend, with her then-7-month-old son.

“I was in Kennedy Space Center, nursing my baby in one of the back kitchens,” Cahoy says. “I have a picture of him in a blue baby Björn on my chest, out cold during the actual launch.”

At MIT, Cahoy looked for ways to collaborate with students on hands-on engineering projects. She teamed up with colleagues at AeroAstro and MIT Lincoln Laboratory, who were teaching students to design CubeSats with weather sensors — an enhancement that pushed the CubeSat beyond an educational exercise to something that could potentially be used as a practical spacecraft.

“That’s where things really started to come together,” says Cahoy, who saw an opportunity to advance space exploration with more nimble, affordable nanosatellites. “It was going to be another 30 years before we would see big, next-generation telescopes. This was something we could do faster, hands-on, and with students.”

Cahoy has since worked on improving the performance and reliability of nanosatellites, and tailoring them for specific missions. She has developed spacecraft to improve data downlink and communication, as well as probes like DeMi, that improve images of distant stars and exoplanets. She is also designing constellations of nanosatellites that work together to track weather patterns on Earth.

Throughout her career, Cahoy has been inspired and sustained by the creativity and enthusiasm of her students.

“I like talking with my students the best,” she says. “It’s fun to remind them about how awesome they are, to encourage them in being creative and taking risks, seeing what they come up with, and occasionally having to talk some sense into them. But really, it’s a mutual discovery. That’s the best part of the job.”