How door-to-door canvassing slowed an epidemic 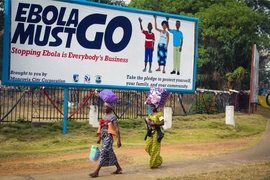 ↓ Download Image
Caption: A billboard in Liberia urges people to help stop the spread of Ebola, which was widespread in 2014-2015. A new study shows how a public awareness campaign helped people understand and cooperate with government efforts to control the disease.
Credits: Photo: United Nations Mission in Liberia/ Emmanuel Tobey 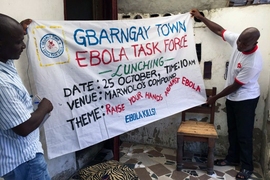 ↓ Download Image
Caption: Residents hold a sign announcing a neighborhood meeting as part of Liberia’s effort to stop the spread of Ebola, in October 2014. A new study shows how a volunteer outreach campaign helped people understand and cooperate with government efforts to control the disease.
Credits: Photo: Lily Tsai

Caption:
A billboard in Liberia urges people to help stop the spread of Ebola, which was widespread in 2014-2015. A new study shows how a public awareness campaign helped people understand and cooperate with government efforts to control the disease.
Credits:
Photo: United Nations Mission in Liberia/ Emmanuel Tobey

Caption:
Residents hold a sign announcing a neighborhood meeting as part of Liberia’s effort to stop the spread of Ebola, in October 2014. A new study shows how a volunteer outreach campaign helped people understand and cooperate with government efforts to control the disease.
Credits:
Photo: Lily Tsai

Liberia was the epicenter of a high-profile Ebola outbreak in 2014-15, which led to more than 10,000 deaths in West Africa. But for all the devastation the illness caused, it could have been worse without an innovative, volunteer-based outreach program Liberia’s government deployed in late 2014.

Now, a study co-authored by an MIT professor shows how much that program, consisting of door-to-door canvassing by community volunteers, spread valuable information and changed public practices during the epidemic. The findings also demonstrate how countries with minimal resources can both fight back against epidemics and gain public trust in difficult circumstances.

“Mediated [volunteer-based] government outreach had a positive impact on all of the [health] outcomes we measured,” says Lily Tsai, a professor of political science at MIT and co-author of a new paper detailing the study’s findings. “People knew more [about Ebola], had a more factual understanding of the epidemic, and were more willing to comply with government control measures. And downstream, they’re more likely to trust government institutions.”

Intriguingly, the volunteer-based outreach program succeeded after an earlier 2014 campaign, using Ministry of Health staff, was abandoned, having been “met with disbelief and outright violence,” as the new paper states.

The research shows that, crucially, 30 percent of the people who spoke with canvassers already knew those volunteers, adding a layer of social trust to the program. And all volunteers canvassed in communities where they lived.

“They were building interpersonal trust and enabling people to hold them accountable for any misinformation,” Tsai says. “They were like guarantors for a loan. It’s a way of saying, ‘You can trust me. I’m going to co-sign for the government. I’m going to guarantee it.’”

The paper, “Building Credibility and Cooperation in Low-Trust Settings: Persuasion and Source Accountability in Liberia During the 2014-2015 Ebola Crisis,” appears in advance online form in the journal Comparative Political Studies.

In addition to Tsai, the authors are Benjamin S. Morse PhD ’19, a senior training manager and researcher at MIT’s Abdul Latif Jameel Poverty Action Lab (J-PAL), and Robert A. Blair, an assistant professor of political science and international and public affairs at Brown University.

Liberia faced many challenges while responding to the Ebola crisis. The nation’s brutal civil wars, from 1989 to 2003, stripped away much of the government’s functionality, and while the country has since taken major steps toward stability, there is still deep and widespread suspicion about government.

“In Liberia, you have a postconflict setting where citizens already mistrusted the government strongly,” Tsai explains. “When citizens say they don’t trust the government, they sometimes think the government is actually out to hurt them, physically.”

To conduct the study, the research conducted multiple public-opinion surveys in Liberia in 2014 and 2015, and added 80 in-depth interviews with government leaders and residents in 40 randomly sampled communities in Monrovia.

To be sure, Ebola was a substantial problem in Liberia. Overall, there were 10,678 reported cases of Ebola and 4,810 deaths attributed to the illness. In June 2014, the surveys showed, 38 percent of Monrovia residents thought the government’s statements about Ebola constituted a “lie” designed to generate more funding from outside aid groups.

However, the study found, once the volunteer-based program got underway, canvassers were able to not only reach large numbers of residents but persuade residents to believe what they were saying.

While knocking on doors in their own communities, the canvassers were equipped with bibs and badges to identify themselves as program volunteers. They distributed information and had conversations with other residents, and even offered their own contact information to people — a significant (and potentially risky) gesture providing a form of accountability to other citizens.

“A large part of what worked was that the outreach workers made it possible for the people that they were canvassing to track them down,” Tsai says. “That’s a pretty big commitment, what we call a ‘costly signal.’ Costly signals help build trust, because it’s not cheap talk.”

Ultimately, while Ebola took a significant toll in Liberia, the volunteer campaign was “remarkably (and surprisingly) effective” in changing both behavior and attitudes, the paper concludes.

A case study in rebuilding trust?

Tsai believes that beyond the specific contours of Liberia’s Ebola response, there are larger issues that can be applied to the study of other countries. For one, while Liberia received significant aid in combatting Ebola from the World Health Organization and other nongovernmental organizations, she thinks the need for short-term aid should not preclude the long-term building of government capacity.

“In the short term, it can make sense for external actors to substitute for the government,” Tsai says. “In the medium and long term we need to think about what that substitution might do to the trust and confidence that people have in their government.” For many people, she adds, “the assumption is the government either isn’t capable of doing it, or shouldn’t be doing it,” when in fact even underresourced governments can make progress on serious issues.

Another point is that the Liberia case shows some ways governments can build confidence among their citizens.

“In so many countries these days, trust in institutions, trust in authorities, trust in sources of information is so low, and in the past there’s been very little research on how to rebuild trust,” Tsai notes. “There’s a lot of research on what lowers trust.”

However, she adds, “That’s what I think is special about this case. Trust was successfully built and constructed under a pretty unlikely set of circumstances.”

Support for the study was provided by the International Growth Centre, the Omidyar Network, and the MIT School of Humanities, Arts, and Social Sciences.

Science reporter Warren Cornwall spotlights Prof. Lily Tsai’s research examining the most effective methods for encouraging people to follow public health guidelines. Tsai is currently working in Sierra Leone on developing a dynamic map “showing potential hot spots where cooperation could be difficult, and what kinds of actions are likely to help ease acceptance of physical distancing and other measures.”

A new study by MIT researchers provides evidence that an effort to increase communication between the government and the people was instrumental in slowing the spread of the Ebola virus in Liberia, reports Bruce Lee for Forbes.