A scientific approach to education reform 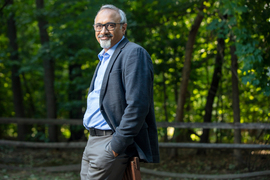 Caption:
The cover to “Grasp” by Sanjay Sarma.

The Covid-19 pandemic has upended educational systems around the world, from kindergartens through graduate schools. Classes with students packed into seats and a teacher giving lessons from the front were suddenly transformed into some combination of online Zoom lessons, home instruction by parents, or solitary work. When things eventually stabilize and return to “normal,” what will that normal be?

Sanjay Sarma, MIT’s vice president for open learning, sees this unprecedented upheaval as a moment to get rid of outmoded methods with little pedagogical basis, and replace them with new approaches based on the latest scientific research on how learning works.

In a new book called “Grasp” Sarma has drawn on his years of experience directing MIT’s many online learning systems, including MITx and OpenCourseWare. With lessons from the use of these platforms and from ongoing research on cognitive science, he offers a vision of how teaching and learning can be radically improved using new methods.

Though the book was completed before the pandemic struck, its lessons have become all the more timely as the world has shifted toward online learning. Sarma recently published an essay on the lessons from the research on learning that are especially relevant to the present situation.

Online learning, he says, offers both advantages and disadvantages compared to in-person classes; it all depends on the approach taken, the subject matter, and the circumstances. Ultimately, looking ahead to a post-pandemic education system, the goal should be to combine the advantages of both online and in-person approaches — and jettison what doesn’t work.

One thing that has become clear from research in recent years is the benefit of what has been called a “flipped” classroom approach. In such a system, lessons that would typically be taught in the classroom would instead be given through online, video, audio, or written materials that students could absorb at their own pace, being able to pause and rewind a lecture repeatedly if necessary in order to grasp a point.

In scenarios where students have safely returned to school, classroom time would instead be devoted to the kinds of things that have traditionally been “homework,” such as working on math problems or on a project, where teachers could be there to offer help and guidance when needed, as students work away individually or in pairs or teams.

When it comes to the time spent lecturing in front of classrooms, Sarma says, “that could be done better online.” Another benefit to this approach is that providing information in shorter units of 10 or 15 minutes each, instead of fitting everything into one-hour or 90-minute lecture formats, has been shown to be much more effective, he says.

As for the interactive parts of teaching, Sarma points out that in some ways there can be advantages to having some kinds of classroom-like discussions in an online Zoom-style format, since that acts as a kind of equalizer so that nobody gets lost in the back rows. “At least they’re all in front of you,” he says. “There are no back-benchers.”

The real hope, of course, is to get back as soon as safely possible to learning situations that really do benefit from face-to-face interaction, he says. For example, projects that entail generating ideas, narrowing down choices, and ending up with a finished product — whether that’s a simple robot or a successful lab experiment or a musical composition — are an important way to build new knowledge and skills, he says. Such activities can benefit immensely from interactions while working hands-on as a team, and from judicious one-on-one coaching by an instructor who is watching carefully as the project unfolds.

The old view of education, Sarma says, saw students’ minds as pieces of paper, and the teacher’s job was essentially to write information on that paper. That’s all wrong, he says. “The student is building a model of the world, like a plant growing. What you need to do is tend to that plant.”

Every student is different, he says, and it’s important to serve the individual interests and needs of individual students. But, he says, that’s very different from the notion of “learning styles” that is prevalent in some educational circles, suggesting that some people learn better visually and others through sound, for example. That notion, he says, is totally unsupported by evidence. Rather, it’s more useful to home in on an individual student’s specific areas of confusion and struggle.

Much of Sarma’s book, which is subtitled “The science transforming how we learn,” is based on recent research using tools such as magnetic resonance imaging to study what takes place in the brain during the learning process. One key lesson, he says, is the importance of circling back to a topic multiple times, and of integrating different parts of a lesson with each other.

Traditionally, classes have often involved teaching a concept, giving an exam, and moving on, he says. But long-term learning is greatly reinforced if that concept is also reintroduced alongside the next one being taught, and if some exercises involve how the two concepts can interact. “If you’re teaching two or three concepts in succession, integrate across them. Give problems along the way that mix them up. It causes them to reload the thinking required for that first problem. It’s in the reloading where the learning occurs,” Sarma says.

For learning to last, he says, it’s also important to “ask [students] now, ask them a week later, and ask them a month later.”

The book delves into a wide variety of other aspects of how recent research is changing our understanding of many aspects of learning and teaching. For example, new ways of detecting the different ways brains process visual information could lead to very early detection of dyslexia, and to ways of applying early and more effective measures to help address it.

One key message of the book is the need for a new way of looking at the whole purpose of education. For a long time, a major function of educational institutions was what Sarma describes as “winnowing” — progressively sorting out the best and brightest students from the rest.

But that’s not an effective or useful strategy, he suggests. An approach that is built on inclusiveness and encouragement, which gives learners a chance to struggle and wrestle with a problem — though not to the point of discouragement and giving up — is likely to produce much better outcomes, Sarma says.

In an article for Inside Higher Ed, Joshua Kim writes that “Grasp: The Science Transforming How We Learn,” a book by Sanjay Sarma, MIT’s vice president for open learning, and research associate Luke Yoquinto is “an important contribution to the literature on learning science and higher education change.” Kim adds that “Grasp can provide the foundations of what learning science-informed teaching might look like, with some fantastic real-world examples of constructivist theory in pedagogical action.”

Vice President for Open Leaning Sanjay Sarma speaks with Jeffrey Young of EdSurge about how the brain works when understanding new concepts. "I question a lot of the structures and dogmas in education that are very closely held, but not necessarily based on science,” says Sarma. “And if we have the courage to reexamine these assumptions and reconstitute education, there's an incredible opportunity to change the game.”

New Scientist spotlights “Grasp: The Science Transforming How We Learn,” a new book by Sanjay Sarma, vice president for open learning, and Luke Yoquinto, a research affiliate at the MIT AgeLab. The book explores how “scientific findings in wildly different fields are transforming the way we learn and teach.”

Making high-quality education accessible to all

A revolution in higher education