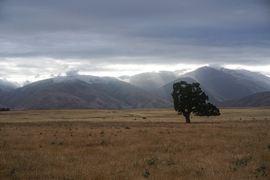 ↓ Download Image
Caption: The Tehachapi Mountains, within the Sierra Nevada and where the research was done, are relatively dry and rugged. Outcrops in this terrain are much scarcer than in the higher elevations of the Sierra Nevada.
Credits: Image: Benjamin Klein 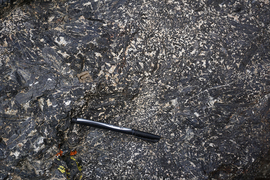 ↓ Download Image
Caption: A rocky outcrop similar to those analyzed by the researchers from a deeper portion of the crust.
Credits: Image: Benjamin Klein

Caption:
The Tehachapi Mountains, within the Sierra Nevada and where the research was done, are relatively dry and rugged. Outcrops in this terrain are much scarcer than in the higher elevations of the Sierra Nevada.
Credits:
Image: Benjamin Klein

Caption:
A rocky outcrop similar to those analyzed by the researchers from a deeper portion of the crust.
Credits:
Image: Benjamin Klein

Although we can’t see it in action, the Earth is constantly churning out new land. This takes place at subduction zones, where tectonic plates crush against each other and in the process plow up chains of volcanos that magma can rise through. Some of this magma does not spew out, but instead mixes and morphs just below the surface. It then crystallizes as new continental crust, in the form of a mountain range.

Scientists have thought that the Earth’s mountain ranges are formed through this process over many millions of years. But MIT geologists have now found that the planet can generate new land far more quickly than previously thought.

In a paper published in the journal Geology, the team shows that parts of the Sierra Nevada mountain range in California rose up surprisingly fast, over a period of just 1.39 million years — more than twice as fast as expected for the region. The researchers attribute the rapid formation of land to a massive flare-up of magma.

“The really exciting thing about our findings is, with new high-precision geochronology, we were able to date how quickly that crust-building process happened, and we showed that this large volume of new crust was emplaced at an extremely rapid rate,” says the study’s lead author Benjamin Klein PhD ’19, who carried out the research as a graduate student in MIT’s Department of Earth, Atmospheric and Planetary Sciences (EAPS). “It was sort of an instant. It was a little over 1 million years, but in geologic times, it was super fast.”

The Sierra Nevada mountain range is a product of the collision of two tectonic plates: the westward-moving North American Plate and what at the time was the Farallon Plate, which ground slowly under the North American Plate, eventually sliding entirely into the Earth’s mantle.

Around 100 million years ago, as both plates collided, they created first a chain of volcanos, then a towering mountain range that is today the Sierra Nevada.

“What is today the West Coast of the United States probably looked, back then, like the Andes today, with high elevations and a chain of large volcanos,” Klein says.

For their study, the researchers concentrated on a geologic feature in the Sierra Nevada known as an intrusive suite — a large volume of rock that originally formed deep in the Earth’s interior. Once crystallized, the rocks form a new, vertical column of continental crust.

They focused in particular on the Bear Valley Intrusive Suite, a unique formation in that it represents the vestiges of new continental crust that is today exposed on the surface, as a 40-mile stretch of granite. These rocks, which today lie horizontally along the mountain range, originally formed as a vertical column. Over time, this tower of new continental crust eroded, stretching and tilting into its current horizontal configuration.

“The Bear Valley Intrusive Suite gives us a complete cross-section of what these magma plumbing systems underlying large volcanos looked like, where normally we would have a limited snapshot,” Klein says. “That allows us to think much more completely about how quickly new crust was being built.”

A speed limit for new crust

The team collected rock samples across a region of the Sierra Nevada Batholith and brought them back to MIT to analyze their composition. They were able to determine the age of nine samples, using uranium-lead geochronology, a high-precision dating technique pioneered by the late MIT Professor Emeritus Sam Bowring. From each sample, the researchers isolated individual grains of zircon, a common mineral in rocks that contains uranium and some lead, the ratio of which scientists can measure to get an estimate of the rock’s age.

From their analyses, Klein and his colleagues discovered that the age of all nine samples spanned a surprisingly short range, of just 1.39 million years. The team calculated an estimate for the amount of magma that must have crystallized to form the new crust that the samples represent. They found that about 250 cubic kilometers of magma likely rose up from Earth’s interior and transformed into new crust — in just 1.39 million years.

“That’s about two-and-a-half times faster than previous estimates for crust formation in the Sierras, which is a pretty big difference,” Klein says. “It gives us a maximum speed limit for how quickly these things can actually happen.”

Klein says that given the speed of this new crust formation, the likely cause was a magma flareup, or sudden burst of magmatic activity.

“The entire batholith was constructed in almost 200 million years, but we know over that period of time, there were periods when it was highly active and periods that were quieter, with less new material added,” Klein says. “What we were able to show in this area was that, at least locally, the rate at which magma was brought in is much faster than the average rates that have been documented in the Sierras.”

Geologists have thought that magma flare-ups occur as a result of unusual activity in the Earth, such as tectonic plates suddenly colliding at a faster rate. According to everything researchers have documented about the Bear Valley Intrusive Suite, however, no such activity transpired at the time the mountain range formed.

“There’s no obvious trigger,” Klein says. “The system is pretty much going along, and then we see this big burst of magma. So this challenges some basic notions in the field, and should inform how people think of how quickly these things could be happening today, in places like the Andes or the volcanos in Japan.”

Collision course: A geological mystery in the Himalayas