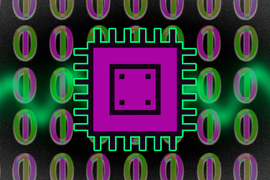 Since the 1940s, classical computers have improved at breakneck speed. Today you can buy a wristwatch with more computing power than the state-of-the-art, room-sized computer from half a century ago. These advances have typically come through electrical engineers’ ability to fashion ever smaller transistors and circuits, and to pack them ever closer together.

But it’s still early days — quantum computing must clear a number of science and engineering hurdles before it can reliably solve practical problems. More than 100 researchers across MIT are helping develop the fundamental technologies necessary scale up quantum computing and turn its potential into reality.

What is quantum computing?

It helps to first understand the basics of classical computers, like the one you’re using to read this story. Classical computers store and process information in binary bits, each of which holds a value of 0 or 1. A typical laptop could contain billions of transistors that use different levels of electrical voltage to represent either of these two values. While the shape, size, and power of classical computers vary widely, they all operate on the same basic system of binary logic.

Quantum computers are fundamentally different. Their quantum bits, called qubits, can each hold a value of 0, 1, or a simultaneous combination of the two states. That’s thanks to a quantum mechanical phenomenon called superposition. “A quantum particle can act as if it’s in two places at once,” explains John Chiaverini, a researcher at the MIT Lincoln Laboratory’s Quantum Information and Integrated Nanosystems Group.

Particles can also be “entangled” with each other, as their quantum states become inextricably linked. Superposition and entanglement allow quantum computers to “solve some kinds of problems exponentially faster than classical computers,” Chiaverini says.

Chiaverini points to particular applications where quantum computers can shine. For example, they’re great at factoring large numbers, a vital tool in cryptography and digital security. They could also simulate complex molecular systems, which could aid drug discovery. In principle, quantum computers could turbocharge many areas of research and industry — if only we could build reliable ones.

How do you build a quantum computer?

Quantum systems are not easy to manage, thanks to two related challenges. The first is that a qubit’s superposition state is highly sensitive. Minor environmental disturbances or material defects can cause qubits to err and lose their quantum information. This process, called decoherence, limits the useful lifetime of a qubit.

The second challenge lies in controlling the qubit to perform logical functions, often achieved through a finely tuned pulse of electromagnetic radiation. This manipulation process itself can generate enough incidental electromagnetic noise to cause decoherence. To scale up quantum computers, engineers will have to strike a balance between protecting qubits from potential disturbance and still allowing them to be manipulated for calculations. This balance could theoretically be attained by a range of physical systems, though two technologies currently show the most promise: superconductors and trapped ions.

A superconducting quantum computer uses the flow of paired electrons — called “Cooper pairs” — through a resistance-free circuit as the qubit. “A superconductor is quite special, because below a certain temperature, its resistance goes away,” says William Oliver, who is an associate professor in MIT’s Department of Electrical Engineering and Computer Science, a Lincoln Laboratory Fellow, and the director of the MIT Center for Quantum Engineering.

The computers Oliver engineers use qubits composed of superconducting aluminum circuits chilled close to absolute zero. The system acts as an anharmonic oscillator with two energy states, corresponding to 0 and 1, as current flows through the circuit one way or the other. These superconducting qubits are relatively large, about one tenth of a millimeter along each edge — that’s hundreds of thousands of times larger than a classical transistor. A superconducting qubit’s bulk makes it easy to manipulate for calculations.

But it also means Oliver is constantly fighting decoherence, seeking new ways to protect the qubits from environmental noise. His research mission is to iron out these technological kinks that could enable the fabrication of reliable superconducting quantum computers. “I like to do fundamental research, but I like to do it in a way that’s practical and scalable,” Oliver says. “Quantum engineering bridges quantum science and conventional engineering. Both science and engineering will be required to make quantum computing a reality.”

Another solution to the challenge of manipulating qubits while protecting them against decoherence is a trapped ion quantum computer, which uses individual atoms — and their natural quantum mechanical behavior — as qubits. Atoms make for simpler qubits than supercooled circuits, according to Chiaverini. “Luckily, I don’t have to engineer the qubits themselves,” he says. “Nature gives me these really nice qubits. But the key is engineering the system and getting ahold of those things.”

Chiaverini’s qubits are charged ions, rather than neutral atoms, because they’re easier to contain and localize. He uses lasers to control the ion’s quantum behavior. “We’re manipulating the state of an electron. We’re promoting one of the electrons in the atom to a higher energy level or a lower energy level,” he says.

The ions themselves are held in place by applying voltage to an array of electrodes on a chip. “If I do that correctly, then I can create an electromagnetic field that can hold on to a trapped ion just above the surface of the chip.” By changing the voltages applied to the electrodes, Chiaverini can move the ions across the surface of the chip, allowing for multiqubit operations between separately trapped ions.

So, while the qubits themselves are simple, fine-tuning the system that surrounds them is an immense challenge. “You need to engineer the control systems — things like lasers, voltages, and radio frequency signals. Getting them all into a chip that also traps the ions is what we think is a key enabler.”

Chiaverini notes that the engineering challenges facing trapped ion quantum computers generally relate to qubit control rather than preventing decoherence; the reverse is true for superconducting-based quantum computers. And of course, there are myriad other physical systems under investigation for their feasibility as quantum computers.

Where do we go from here?

If you’re saving up to buy a quantum computer, don’t hold your breath. Oliver and Chiaverini agree that quantum information processing will hit the commercial market only gradually in the coming years and decades as the science and engineering advance.

In the meantime, Chiaverini notes another application of the trapped ion technology he’s developing: highly precise optical clocks, which could aid navigation and GPS. For his part, Oliver envisions a linked classical-quantum system, where a classical machine could run most of an algorithm, sending select calculations for the quantum machine to run before its qubits decohere. In the longer term, quantum computers could operate with more independence as improved error-correcting codes allow them to function indefinitely.

“Quantum computing has been the future for several years,” Chiaverini says. But now the technology appears to be reaching an inflection point, shifting from solely a scientific problem to a joint science and engineering one — “quantum engineering” — a shift aided in part by Chiaverini, Oliver, and dozens of other researchers at MIT’s Center for Quantum Engineering (CQE) and elsewhere.

Generating photons for communication in a quantum computing system