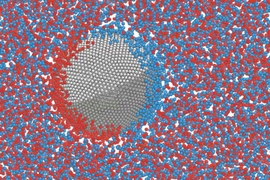 ↓ Download Image
Caption: MIT researchers have discovered a phenomenon that could be harnessed to control the movement of tiny particles floating in suspension. This approach, which requires simply applying an external electrical field, may ultimately lead to new ways of performing certain industrial or medical processes that require separation of tiny suspended materials.
Credits: Courtesy of the researchers

Caption:
MIT researchers have discovered a phenomenon that could be harnessed to control the movement of tiny particles floating in suspension. This approach, which requires simply applying an external electrical field, may ultimately lead to new ways of performing certain industrial or medical processes that require separation of tiny suspended materials.
Credits:
Courtesy of the researchers

MIT researchers have discovered a phenomenon that could be harnessed to control the movement of tiny particles floating in suspension. This approach, which requires simply applying an external electric field, may ultimately lead to new ways of performing certain industrial or medical processes that require separation of tiny suspended materials.

The findings are based on an electrokinetic version of the phenomenon that gives curveballs their curve, known as the Magnus effect. Zachary Sherman PhD ’19, who is now a postdoc at the University of Texas at Austin, and MIT professor of chemical engineering James Swan describe the new phenomenon in a paper published this week in the journal Physical Review Letters.

The Magnus effect causes a spinning object to be pulled in a direction perpendicular to its motion, as in the curveball; it is based on aerodynamic forces and operates at macroscopic scales — i.e. on easily visible objects — but not on smaller particles. The new phenomenon, induced by an electric field, can propel particles down to nanometer scales, moving them along in a controlled direction without any contact or moving parts.

The discovery came about as a surprise, as Sherman was testing some new simulation software for the interactions of tiny nanoscale particles that he was developing, within magnetic and electric fields. The test case he was studying involves placing charged particles in an electrolytic liquid, which are liquids with ions, or charged atoms or molecules, in them.

It was known, he says, that when charged particles just a few tens to hundreds of nanometers across are placed in such liquids they remain suspended within it rather than settling, forming a colloid. Ions then cluster around the particles. The new software successfully simulated this ion clustering. Next, he simulated an electric field across the material. This would be expected to induce a process called electrophoresis, which would propel the particles along in the direction of the applied field. Again, the software correctly simulated the process.

Then Sherman decided to push it further, and gradually increased the strength of the electric field. “But then we saw this funny thing,” he says. “If the field was strong enough, you would get normal electrophoresis for a tiny bit, but then the colloids would spontaneously start spinning.” And that’s where the Magnus effect comes in.

Not only were the particles spinning in the simulations as they moved along, but “those two motions coupled together, and the spinning particle would veer off of its path,” he says. “It’s kind of strange, because you apply a force in one direction, and then the thing moves in an orthogonal [right-angle] direction to what you've specified.” It’s directly analogous to what happens aerodynamically with spinning balls, he says. “If you throw a curveball in baseball, it goes in the direction you threw it, but then it also veers off. So this is a kind of a microscopic version of that well-known macroscopic Magnus effect.”

When the applied field was strong enough, the charged particles took on a strong motion in the direction perpendicular to the field. This could be useful, he says, because with electrophoresis “the particle moves toward one of the electrodes, and you run into this problem where the particle will move and then it will run into the electrode, and it’ll stop moving. So you can’t really generate a continuous motion with just electrophoresis.”

Instead, since this new effect goes at right angles to the applied field, it could be used for example to propel particles along a microchannel, simply by placing electrodes on the top and bottom. That way, he says, the particle will “just move along the channel, and it will never bump into the electrodes.” That makes it, he says, “actually a more efficient way to direct the motion of microscopic particles.”

There are two different kinds of examples of processes where this ability might come in handy, he says. One is to use the particle to deliver some sort of “cargo” to a specific location. For example, the particle could be attached to a therapeutic drug “and you’re trying to get it to a target site that needs that drug, but you can’t get the drug there directly,” he says. Or the particle might contain some sort of chemical reactant or catalyst that needs to be directed to a specific channel to carry out its desired reaction.

The other example is sort of the inverse of that process: picking up some kind of target material and bringing it back. For example, a chemical reaction to generate a product might also generate a lot of unwanted byproducts. “So you need a way to get a product out,” he says. These particles can be used to capture the product and then be extracted using the applied electric field. “In this way they kind of act as little vacuum cleaners,” he says. “They pick up the thing you want, and then you can move them somewhere else, and then release the product where it’s easier to collect.”

He says this effect should apply for a wide array of particle sizes and particle materials, and the team will continue to study how different material properties affect the rotation speed or the translation speed of this effect. The basic phenomenon should apply to virtually any combination of materials for the particles and the liquid they are suspended in, as long as the two differ from each other in terms of an electrical property called the dielectric constant.

The researchers looked at materials with a very high dielectric constant, such as metal particles, suspended in a much lower-conducting electrolyte, such as water or oils. “But you might also be able to see this with any two materials that have a contrast” in dielectric constant, Sherman says, for example with two oils that don’t mix and thus form suspended droplets.

The work was supported by NASA and the National Science Foundation.