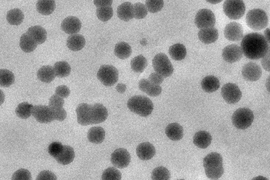 MIT engineers have shown that they can enhance the performance of drug-delivery nanoparticles by controlling a trait of chemical structures known as chirality — the “handedness” of the structure.

Many biological molecules can come in either right-handed or left-handed forms, which are identical in composition but are mirror images of each other.

The MIT team found that coating nanoparticles with the right-handed form of the amino acid cysteine helped the particles to avoid being destroyed by enzymes in the body. It also helped them to enter cells more efficiently. This finding could help researchers to design more effective carriers for drugs to treat cancer and other diseases, says Robert Langer, the David H. Koch Institute Professor at MIT and a member of the Koch Institute for Integrative Cancer Research.

“We are very excited about this paper because controlling chirality offers new possibilities for drug delivery and hence new medical treatments,” says Langer, who is one of the senior authors of the paper.

“Chirality is ubiquitous in nature, imparting uniqueness and specificity to the biological and chemical properties of materials,” Yeom says. “For example, molecules formed with the same composition taste sweet or bitter and smell differently depending on their chirality, and one enantiomer is inactive or even toxic while the other enantiomer can serve an important biological function.”

The MIT team hypothesized that it might be possible to take advantage of chiral interactions to improve the performance of drug-delivery nanoparticles. To test that idea, they created “supraparticles” consisting of clusters of 2-nanometer cobalt oxide particles whose chirality was provided by either the “D” or “L” version of cysteine on the surfaces.

By flowing these particles along a channel lined with cancer cells, including myeloma and breast cancer cells, the researchers could test how well each type of particle was absorbed by the cells. They found that particles coated with “D” cysteine were absorbed more efficiently, which they believe is because they are able to interact more strongly with cholesterol and other lipids found in the cell membrane, which also have the “D” orientation.

The researchers also believed that the “D” version of cysteine might help nanoparticles avoid being broken down by enzymes in the body, which are made of “L” amino acids. This could allow the particles to circulate in the body for longer periods of time, making it easier for them to reach their intended destinations.

In a study of mice, the researchers found that “D”-coated particles did stay in the bloodstream longer, suggesting that they were able to successfully evade enzymes that destroyed the “L”-coated particles. About two hours after injection, the number of “D” particles in circulation was much greater than the number of “L” particles, and it remained higher over the 24 hours of the experiment.

“This is a first step in looking at how chirality can potentially aid these particles in reaching cancer cells and increasing circulation time. The next step is to see if we could actually make a difference in cancer treatment,” Jaklenec says.

The researchers now plan to test this approach with other types of drug-delivery particles. In one project, they are investigating whether coating gold particles with “D” amino acids will improve their ability to deliver cancer drugs in mice. In another, they are using this approach to modify adenoviruses, which some of their collaborators are developing as a potential new way to treat cancer.

“In this study, we showed that the ‘D’ chirality allows for longer circulation time and increased uptake by cancer cells. The next step would be to determine if drug-loaded chiral particles give enhanced or prolonged efficacy compared to free drug,” Jaklenec says. “This is potentially translatable to essentially any nanoparticle.”

The research was funded by the Koch Institute’s Marble Center for Cancer Nanomedicine, the National Council for Scientific and Technological Development of Brazil, the Estudar Foundation, a Ruth L. Kirschstein National Research Service Award, a Burroughs Wellcome Fund Career Award at the Scientific Interface, an National Institutes of Health Director’s New Innovator Award, the American Cancer Society, an AACR-Bayer Innovation and Discovery Grant, and the National Research Foundation of Korea.