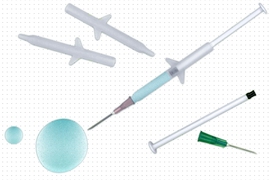 ↓ Download Image
Caption: MIT researchers have developed a computational model that can help improve the injectability of drug-delivery microparticles and prevent clogging. Using this model, the researchers were able to achieve a sixfold increase in the percentage of microparticles they could successfully inject.
Credits: Image: Felice Frankel and Christine Daniloff, MIT

Caption:
MIT researchers have developed a computational model that can help improve the injectability of drug-delivery microparticles and prevent clogging. Using this model, the researchers were able to achieve a sixfold increase in the percentage of microparticles they could successfully inject.
Credits:
Image: Felice Frankel and Christine Daniloff, MIT

Microparticles offer a promising way to deliver multiple doses of a drug or vaccine at once, because they can be designed to release their payload at specific intervals. However, the particles, which are about the size of a grain of sand, can be difficult to inject because they can get clogged in a typical syringe.

MIT researchers have now developed a computational model that can help them improve the injectability of such microparticles and prevent clogging. The model analyzes a variety of factors, including the size and shape of the particles, to determine an optimal design for injectability.

Using this model, the researchers were able to achieve a sixfold increase in the percentage of microparticles they could successfully inject. They now hope to use the model to develop and test microparticles that could be used to deliver cancer immunotherapy drugs, among other potential applications.

“This is a framework that can help us with some of the technologies that we’ve developed in the lab and that we’re trying to get into the clinic,” says Ana Jaklenec, a research scientist at MIT’s Koch Institute for Integrative Cancer Research.

Jaklenec and Robert Langer, the David H. Koch Institute Professor at MIT, are the senior authors of the study, which appears today in Science Advances. The paper’s lead author is MIT graduate student Morteza Sarmadi.

Microparticles range in size from 1 to 1,000 microns (millionths of a meter). Many researchers are working on using microparticles made of polymers and other materials to deliver drugs, and about a dozen such drug formulations have been approved by the FDA. However, others have failed because of the difficulty of injecting them.

“The major issue is clogging, somewhere in the system, that doesn’t allow for the full dose to be delivered,” Jaklenec says. “Many of these drugs don’t make it past development because of the challenges with injectability.”

Such drugs are usually injected intravenously or under the skin. Making sure that these drugs successfully reach their destinations is a key step in the drug development process, but it’s one that is often done last, and can thwart an otherwise promising treatment, Sarmadi says.

“Injectability is a major factor in how successful a drug will be, but little attention has been paid to trying to improve administration techniques,” he says. “We hope that our work can improve the clinical translation of novel and advanced controlled-release drug formulations.”

Langer and Jaklenec have been working on developing hollow microparticles that can be filled with multiple doses of a drug or vaccine. These particles can be designed to release their payloads at different times, which could eliminate the need for multiple injections.

To improve the injectability of these and other microparticles, the researchers experimentally analyzed the effects of altering the size and shape of the microparticles, the viscosity of solution in which they are suspended, and the size and shape of the syringe and needle used to deliver them. They tested cubes, spheres, and cylindrical particles of different sizes, and measured the injectability of each one.

The researchers then used this data to train a type of computational model known as a neural network to predict how each of these parameters affect injectability. The most important factors turned out to be particle size, particle concentration in the solution, viscosity of the solution, and needle size. Researchers working on drug-delivering microparticles can simply input these parameters into the model and get a prediction of how injectable their particles will be, saving the time they would have had to spend building different versions of the particles and testing them experimentally.

“Instead of going through the experiments, and going back and forth, having no idea of how successful the system will be, you can use this neural network and it can guide you, early on, to have an understanding of the system,” Sarmadi says.

The researchers also used their model to explore how changing the shape of the syringe could affect injectability. They came up with an optimal shape that resembles a nozzle, with a wide diameter that tapers toward the tip. Using this syringe design, the researchers tested the injectability of the microparticles they described in a 2017 Science study, and found that they boosted the percentage of particles delivered from 15 percent to almost 90 percent.

“This is another way to maximize the forces that are acting on the particles and pushing the particles toward the needle,” Sarmadi says. “It’s a promising result that shows that there’s huge room for improvement in the injectability of microparticle systems.”

The researchers are now working on designing optimized systems for delivering cancer immunotherapy drugs, which can help stimulate an immune response that destroys tumor cells. They believe these types of microparticles could also be used to deliver a variety of vaccines or drugs, including small-molecule drugs and biologics, which include large molecules such as proteins.

The research was funded by the Bill and Melinda Gates Foundation, the Koch Institute Support (core) Grant from the National Cancer Institute, and a National Institutes of Health Ruth L. Kirschestein National Research Service Award.