A mobile tool for global change 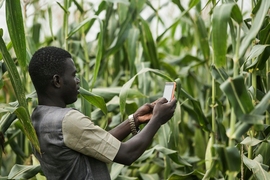 ↓ Download Image
Caption: Solutions built on Dimagi's platform have been used in 80 countries in a variety of healthcare, agriculture, education, and financial initiatives.
Credits: Image: Dimagi, courtesy of Xaume Olleros 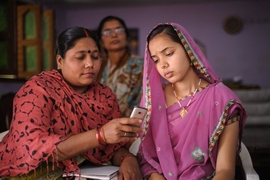 ↓ Download Image
Caption: Dimagi offers users a way to design mobile tools like registration forms that can be used by frontline health care workers in the most remote, impoverished regions of the world, transforming care.
Credits: Image: Dimagi

Caption:
Dimagi offers users a way to design mobile tools like registration forms that can be used by frontline health care workers in the most remote, impoverished regions of the world, transforming care.
Credits:
Image: Dimagi

Caption:
Solutions built on Dimagi's platform have been used in 80 countries in a variety of healthcare, agriculture, education, and financial initiatives.
Credits:
Image: Dimagi, courtesy of Xaume Olleros

Frontline health workers represent the lifeblood of many health care systems in low- and middle-income countries around the world. Often overworked and underpaid, these workers operate outside hospital settings to meet the community’s poorest people where they live and work, ensuring health care initiatives impact the families that need them most.

The global growth in cell phone ownership has increased the potential for mobile solutions to help these workers, and perhaps no company has unlocked that potential with more success than the social enterprise Dimagi.

Dimagi’s flagship product, CommCare, lets users with no coding experience build apps featuring things like registration forms, decision support, and multimedia that can be accessed offline by cell phones of all types. With the backing of nonprofit organizations and governments, those capabilities have been put into the pockets of frontline workers in the most remote, impoverished regions of the world, transforming the way they collect information and provide care for hundreds of millions of people across 80 countries.

Multiple studies have documented CommCare’s transformative effect. Randomized control trials have shown it helped frontline workers improve child nutrition in India, increase the percentage of in-facility births in Tanzania, and reduce errors in screenings for cardiovascular diseases in South Africa. Other studies have shown CommCare helped increase the frequency of HIV tests for pregnant women in Nigeria and reduced infant and maternal mortality rates in Guatemala.

Beyond health care, Dimagi’s mobile tools are also being used in education, agricultural, and financial initiatives around the world. For founders Jonathan Jackson ’03, SM ’05 and Vikram Kumar, the company’s impact has come one successful project at a time through a user-centered approach to creating the most empowering and scalable solutions possible.

In 2002, Kumar was a graduate research assistant in MIT’s Media Lab and on his way to earning his MD in the MIT-Harvard Division of Health Sciences and Technology. Jackson was building a personal digital assistant for nurses in Zambia as part of his master’s work at MIT.

The two students met through a teacher’s assistant in one of Jackon’s classes and immediately decided to start a venture together. They initially planned to use health informatics to improve public health but realized the developing world wasn’t quite ready for that approach.

“As soon as we got into the sector we realized there’s no good data to begin with, so we had to build the underlying data management systems,” Jackson says. “We rapidly shifted the company from public health informatics to more of a global health software focus.”

In early consulting projects around Africa and India, the founders built a drag-and-drop system for building forms that clinicians could use in hospitals, using the Nokia phones that were quickly becoming common.

“The writing was on the wall for massive mobile adoption in general, with dumb phones, and then you could see smartphones were going to take off,” Jackson says. “But we always focused on building for the phone technology that users had today as opposed to the technology that might be available tomorrow, and I think that was one of the reasons we were so successful.”

One of Dimagi’s early projects was working with partners to create a national medical record system for Zambia. The system is still in use today, and because Dimagi’s solutions have been open source from the beginning, the system has since been adopted by other countries around Africa.

Around 2008, with SMS-based solutions and a case management app built out, Dimagi began focusing on helping frontline, or community, workers. Such workers have traditionally relied on paper-based data management systems in the field that offer little on-site guidance and require data entry into a central system later on.

With health care workers in low- and middle-income countries, “you have a workforce with amazing potential, and they are often the only option for health care provision in rural settings,” Jackson says. “These workers are often not able to be trained sufficiently, not able to be paid well, and they’re often overburdened. We thought the inclusion of mobile phones and the value that could be delivered by community health care workers and frontline providers was a great synergy.”

The pivot made Dimagi’s users more dispersed and numerous, but Jackson says his team never wavered in its philosophy of working closely with the people they are trying to help and learning from them as they design solutions.

“We feel incredibly strongly about getting field experience and being humble,” Jackson says. “We have a methodology called ‘Design Under the Mango Tree’ based on how we did a lot of our early work with CommCare. We were out there with the users, getting feedback, staying up late and overnight so it looked how they recommended the next day. That experience, of seeing the frontline workers, them being able to tell us they want something different, going in and changing it, and then asking if they like the change, that was an adrenaline boost for us.”

Designing under the mango tree

Dimagi’s approach has led the company to a scale the founders never could have imagined when they first started out. It has also guided them as they’ve built out features.

Today, Dimagi boasts that CommCare allows users to “collect data on everything, in any language.” The data can include text, images, GPS coordinates, barcodes, audio, and more. Customers designing a data collection app on CommCare can monitor field workers in real time and include notifications or progress updates. Incorporating multimedia components into the app, like pictures and video instructions, allows illiterate field workers and patients to interact with CommCare and gives credibility to the workers.

Dimagi also offers extensive support services to go with some of its subscription options. The company of about 150 people includes experts specializing in programs around women’s health and empowerment, agriculture, financial literacy, and more.

Some of Dimagi’s biggest customers are governments. India, for example, has equipped more than half a million workers with a CommCare solution to help with state childcare and nutrition services.

Unfortunately, scale has not brought simplicity. In fact, Jackson says things have gotten more difficult as Dimagi has grown, noting the donor-centered social enterprise space is great at launching new projects, but not good at incentivizing mature companies to continue innovating in areas where they’re already deployed.

That’s one of the reasons Dimagi restructured its company last year. Jackson says Dimagi is now divided into three parts: its software division, its professional services team, and what he calls the impact team, which has been instructed to break even while making as much impact as possible and not worrying about profit.

“We’re built to make an impact,” Jackson says. “That’s why everyone works at this company. It’s why we’re here. A lot of that just requires going that extra mile for the end users and that’s something that is infused in our DNA as an organization.”