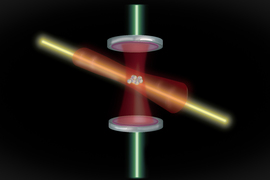 ↓ Download Image
Caption: Atoms are trapped in an optical cavity composed of two mirrors. When a “squeezing” laser is set through the cavity, the atoms are entangled, and their frequency is measured with a second laser, as a platform for more precise atomic clocks.
Credits: Image: courtesy of the researchers

Caption:
Atoms are trapped in an optical cavity composed of two mirrors. When a “squeezing” laser is set through the cavity, the atoms are entangled, and their frequency is measured with a second laser, as a platform for more precise atomic clocks.
Credits:
Image: courtesy of the researchers

Atomic clocks are the most precise timekeepers in the world. These exquisite instruments use lasers to measure the vibrations of atoms, which oscillate at a constant frequency, like many microscopic pendulums swinging in sync. The best atomic clocks in the world keep time with such precision that, if they had been running since the beginning of the universe, they would only be off by about half a second today.

Still, they could be even more precise. If atomic clocks could more accurately measure atomic vibrations, they would be sensitive enough to detect phenomena such as dark matter and gravitational waves. With better atomic clocks, scientists could also start to answer some mind-bending questions, such as what effect gravity might have on the passage of time and whether time itself changes as the universe ages.

Now a new kind of atomic clock designed by MIT physicists may enable scientists to explore such questions and possibly reveal new physics.

The researchers report today in the journal Nature that they have built an atomic clock that measures not a cloud of randomly oscillating atoms, as state-of-the-art designs measure now, but instead atoms that have been quantumly entangled. The atoms are correlated in a way that is impossible according to the laws of classical physics, and that allows the scientists to measure the atoms’ vibrations more accurately.

The new setup can achieve the same precision four times faster than clocks without entanglement.

“Entanglement-enhanced optical atomic clocks will have the potential to reach a better precision in one second than current state-of-the-art optical clocks,”  says lead author Edwin Pedrozo-Peñafiel, a postdoc in MIT’s Research Laboratory of Electronics.

If state-of-the-art atomic clocks were adapted to measure entangled atoms the way the MIT team’s setup does, their timing would improve such that, over the entire age of the universe, the clocks would be less than 100 milliseconds off.

Since humans began tracking the passage of time, they have done so using periodic phenomena, such as the motion of the sun across the sky. Today, vibrations in atoms are the most stable periodic events that scientists can observe. Furthermore, one cesium atom will oscillate at exactly the same frequency as another cesium atom.

To keep perfect time, clocks would ideally track the oscillations of a single atom. But at that scale, an atom is so small that it behaves according to the mysterious rules of quantum mechanics: When measured, it behaves like a flipped coin that only when averaged over many flips gives the correct probabilities. This limitation is what physicists refer to as the Standard Quantum Limit.

“When you increase the number of atoms, the average given by all these atoms goes toward something that gives the correct value,” says Colombo.

This is why today’s atomic clocks are designed to measure a gas composed of thousands of the same type of atom, in order to get an estimate of their average oscillations. A typical atomic clock does this by first using a system of lasers to corral a gas of ultracooled atoms into a trap formed by a laser. A second, very stable laser, with a frequency close to that of the atoms’ vibrations, is sent to probe the atomic oscillation and thereby keep track of time.

And yet, the Standard Quantum Limit is still at work, meaning there is still some uncertainty, even among thousands of atoms, regarding their exact individual frequencies. This is where Vuletic and his group have shown that quantum entanglement may help. In general, quantum entanglement describes a nonclassical physical state, in which atoms in a group show correlated measurement results, even though each individual atom behaves like the random toss of a coin.

The team reasoned that if atoms are entangled, their individual oscillations would tighten up around a common frequency, with less deviation than if they were not entangled. The average oscillations that an atomic clock would measure, therefore, would have a precision beyond the Standard Quantum Limit.

In their new atomic clock, Vuletic and his colleagues entangle around 350 atoms of ytterbium, which oscillates at the same very high frequency as visible light, meaning any one atom vibrates 100,000 times more often in one second than cesium. If ytterbium’s oscillations can be tracked precisely, scientists can use the atoms to distinguish ever smaller intervals of time.

The group used standard techniques to cool the atoms and trap them in an optical cavity formed by two mirrors. They then sent a laser through the optical cavity, where it ping-ponged between the mirrors, interacting with the atoms thousands of times.

“It’s like the light serves as a communication link between atoms,” Shu explains. “The first atom that sees this light will modify the light slightly, and that light also modifies the second atom, and the third atom, and through many cycles, the atoms collectively know each other and start behaving similarly.”

In this way, the researchers quantumly entangle the atoms, and then use another laser, similar to existing atomic clocks, to measure their average frequency. When the team ran a similar experiment without entangling atoms, they found that the atomic clock with entangled atoms reached a desired precision four times faster.

“You can always make the clock more accurate by measuring longer,” Vuletic says. “The question is, how long do you need to reach a certain precision. Many phenomena need to be measured on fast timescales.”

He says if today’s state-of-the-art atomic clocks can be adapted to measure quantumly entangled atoms, they would not only keep better time, but they could help decipher signals in the universe such as dark matter and gravitational waves, and start to answer some age-old questions.

“As the universe ages, does the speed of light change? Does the charge of the electron change?” Vuletic says. “That’s what you can probe with more precise atomic clocks.”

This research was supported, in part, by DARPA, the National Science Foundation, and the Office of Naval Research.

MIT researchers have developed a new atomic clock that can keep time more precisely thanks to the use of entangled atoms, reports Leila Stein for Popular Mechanics. “If all atomic clocks worked the way this one does then their timing, over the entire age of the universe, would be less than 100 milliseconds off,” Stein writes.