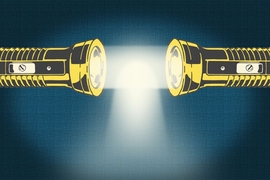 ↓ Download Image
Caption: Scientists at MIT, Harvard University, and elsewhere have now demonstrated that photons can be made to interact — an accomplishment that could open a path toward using photons in quantum computing, if not in light sabers.

Caption:
Scientists at MIT, Harvard University, and elsewhere have now demonstrated that photons can be made to interact — an accomplishment that could open a path toward using photons in quantum computing, if not in light sabers.

Try a quick experiment: Take two flashlights into a dark room and shine them so that their light beams cross. Notice anything peculiar? The rather anticlimactic answer is, probably not. That’s because the individual photons that make up light do not interact. Instead, they simply pass each other by, like indifferent spirits in the night.

But what if light particles could be made to interact, attracting and repelling each other like atoms in ordinary matter? One tantalizing, albeit sci-fi possibility: light sabers — beams of light that can pull and push on each other, making for dazzling, epic confrontations. Or, in a more likely scenario, two beams of light could meet and merge into one single, luminous stream.

It may seem like such optical behavior would require bending the rules of physics, but in fact, scientists at MIT, Harvard University, and elsewhere have now demonstrated that photons can indeed be made to interact — an accomplishment that could open a path toward using photons in quantum computing, if not in light sabers.

In a paper published today in the journal Science, the team, led by Vladan Vuletic, the Lester Wolfe Professor of Physics at MIT, and Professor Mikhail Lukin from Harvard University, reports that it has observed groups of three photons interacting and, in effect, sticking together to form a completely new kind of photonic matter.

In controlled experiments, the researchers found that when they shone a very weak laser beam through a dense cloud of ultracold rubidium atoms, rather than exiting the cloud as single, randomly spaced photons, the photons bound together in pairs or triplets, suggesting some kind of interaction — in this case, attraction — taking place among them.

While photons normally have no mass and travel at 300,000 kilometers per second (the speed of light), the researchers found that the bound photons actually acquired a fraction of an electron’s mass. These newly weighed-down light particles were also relatively sluggish, traveling about 100,000 times slower than normal noninteracting photons.

Vuletic says the results demonstrate that photons can indeed attract, or entangle each other. If they can be made to interact in other ways, photons may be harnessed to perform extremely fast, incredibly complex quantum computations.

“The interaction of individual photons has been a very long dream for decades,” Vuletic says.

Vuletic and Lukin lead the MIT-Harvard Center for Ultracold Atoms, and together they have been looking for ways, both theoretical and experimental, to encourage interactions between photons. In 2013, the effort paid off, as the team observed pairs of photons interacting and binding together for the first time, creating an entirely new state of matter.

In their new work, the researchers wondered whether interactions could take place between not only two photons, but more.

“For example, you can combine oxygen molecules to form O2 and O3 (ozone), but not O4, and for some molecules you can’t form even a three-particle molecule,” Vuletic says. “So it was an open question: Can you add more photons to a molecule to make bigger and bigger things?”

To find out, the team used the same experimental approach they used to observe two-photon interactions. The process begins with cooling a cloud of rubidium atoms to ultracold temperatures, just a millionth of a degree above absolute zero. Cooling the atoms slows them to a near standstill. Through this cloud of immobilized atoms, the researchers then shine a very weak laser beam — so weak, in fact, that only a handful of photons travel through the cloud at any one time.

The researchers then measure the photons as they come out the other side of the atom cloud. In the new experiment, they found that the photons streamed out as pairs and triplets, rather than exiting the cloud at random intervals, as single photons having nothing to do with each other.

In addition to tracking the number and rate of photons, the team measured the phase of photons, before and after traveling through the atom cloud. A photon’s phase indicates its frequency of oscillation.

“The phase tells you how strongly they’re interacting, and the larger the phase, the stronger they are bound together,” Venkatramani explains. The team observed that as three-photon particles exited the atom cloud simultaneously, their phase was shifted compared to what it was when the photons didn’t interact at all, and was three times larger than the phase shift of two-photon molecules. “This means these photons are not just each of them independently interacting, but they’re all together interacting strongly.”

The researchers then developed a hypothesis to explain what might have caused the photons to interact in the first place. Their model, based on physical principles, puts forth the following scenario: As a single photon moves through the cloud of rubidium atoms, it briefly lands on a nearby atom before skipping to another atom, like a bee flitting between flowers, until it reaches the other end.

If another photon is simultaneously traveling through the cloud, it can also spend some time on a rubidium atom, forming a polariton — a hybrid that is part photon, part atom. Then two polaritons can interact with each other via their atomic component. At the edge of the cloud, the atoms remain where they are, while the photons exit, still bound together. The researchers found that this same phenomenon can occur with three photons, forming an even stronger bond than the interactions between two photons.

“What was interesting was that these triplets formed at all,” Vuletic says. “It was also not known whether they would be equally, less, or more strongly bound compared with photon pairs.”

The entire interaction within the atom cloud occurs over a millionth of a second. And it is this interaction that triggers photons to remain bound together, even after they’ve left the cloud.

“What’s neat about this is, when photons go through the medium, anything that happens in the medium, they ‘remember’ when they get out,” Cantu says.

This means that photons that have interacted with each other, in this case through an attraction between them, can be thought of as strongly correlated, or entangled — a key property for any quantum computing bit.

“Photons can travel very fast over long distances, and people have been using light to transmit information, such as in optical fibers,” Vuletic says. “If photons can influence one another, then if you can entangle these photons, and we’ve done that, you can use them to distribute quantum information in an interesting and useful way.”

Going forward, the team will look for ways to coerce other interactions such as repulsion, where photons may scatter off each other like billiard balls.

“It’s completely novel in the sense that we don’t even know sometimes qualitatively what to expect,” Vuletic says. “With repulsion of photons, can they be such that they form a regular pattern, like a crystal of light? Or will something else happen? It’s very uncharted territory.”

This research was supported in part by the National Science Foundation.

Research by Physics PhD candidate Sergio Cantu has led to the discovery of a new form of light, which happens when photos stick together, as opposed to passing through one another. “’We send the light into the medium, it gets effectively dressed up as if it were atoms, and then when it turns back into photons they remember interactions that happened in the medium,” Cantu explains to Leah Crane at New Scientist.

Writing for Newsweek, Katherine Hignett reports that for the first time, scientists have observed groups of three photons interacting and effectively producing a new form of light. “Light,” Prof. Vladan Vuletic, who led the research, tells Hignett, “is already used to transmit data very quickly over long distances via fiber optic cables. Being able to manipulate these photons could enable the distribution of data in much more powerful ways.”

MIT physicists have created a new form of light that allows up to three photons to bind together, writes Daniel Oberhaus for Motherboard. While the research is experimental, Oberhaus writes that the trio of photons “are much more strongly bound together and are, as a result, better carriers of information” than other photonic qubits.

Research published in Science demonstrates the ability of photons to bind together in a way previously thought impossible – creating a new form of light. “The photon dance happens in a lab at MIT where the physicists run table-top experiments with lasers,” writes Marissa Fessenden for Smithsonian. “Photons bound together in this way can carry information – a quality that is useful for quantum computing.”

Scientists demonstrate one of largest quantum simulators yet, with 51 atoms