Caption:
As part of an MIT "Tomorrow Time" event, Lobby 7 pillars were wrapped with poster paper asking the community what they have been procrastinating on.
Credits:
Photo: Stephanie Tran/DSL Communications

Caption:
Over 600 goals were accomplished over the course of the Tomorrow Time event. For each goal accomplished, a meal will be donated to the Boston Greater Food Bank.
Credits:
Photo: Stephanie Tran/DSL Communications

Caption:
More than 30 campus departments and resources participated in the event — either located at the Hub of Tomorrow in Lobby 13 or stationed in various other satellite locations across campus.
Credits:
Photo: Stephanie Tran/DSL Communications

Caption:
Entire map of all the 30-plus campus resources located across the Institute.
Credits:
Image: Solomon Posner/Division of Student Life

It was a beautiful, brisk October day for students to get stuff done that they may have put off until tomorrow. The first-ever Tomorrow Time event was a day when MIT students across campus were tasked with trying to complete at least one goal they have been procrastinating on.

To incentivize students to tackle an item on their to-do list, for each goal accomplished a meal is donated to the Boston Greater Food Bank — help yourself, and help pay it forward within the community. In addition, students received a specially designed Tomorrow Time pin to wear proudly across campus. By the end of the day, more than 400 students reported over 600 goals accomplished. 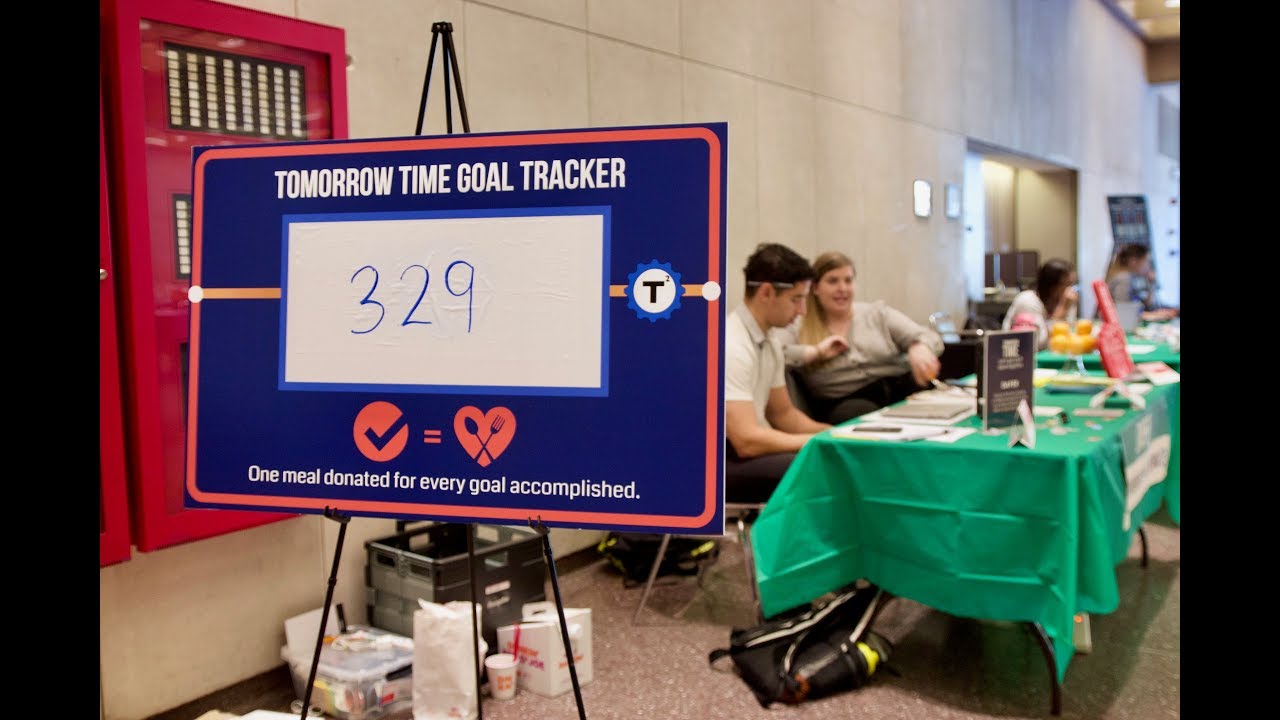 Imagined by Student Support Services and sponsored by the MindHandHeart Innovation Fund, the purpose of the event was to lower the barriers on shared tasks and provide students with easy access to commonly needed resources, all in one place. Over 50 campus departments and resources participated in the event — either located at the Hub of Tomorrow in Lobby 13 or stationed in various other satellite locations across campus. “We were excited to see people sitting down and tackling their to-do lists and connecting with resources on campus that they had been putting off for one reason or another,” says Ray Feller, assistant dean of Student Support Services.

The student experience at MIT often feels similar to trying to drink from a firehose, which leads to an undue stress and excessive procrastination, explains Danielle Geathers, a sophomore in mechanical engineering and Undergraduate Association assistant officer on diversity. The Tomorrow Time event allowed students to feel at ease on getting tasks accomplished, together. “I felt supported as my friends and I were intentional about accomplishing the tasks we had previously procrastinated on,” she says.

Plans for another Tomorrow Time event are being considered to make it bigger and better. Send any feedback or comments to tomorrowtime@mit.edu.