Alumni-founded Toast provides technologies that help get an order from a customer to the kitchen and back again.
Zach Winn | MIT News Office
Publication Date:
Press Inquiries 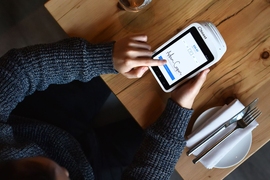 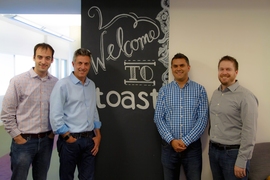 People in the restaurant industry know a thing or two about execution. High operating costs, low profit margins, and the perishable nature of every establishment’s most important resource — food — make it essential to get things done with speed and efficiency.

It’s no surprise, then, that the startup Toast has found success developing technology to streamline restaurant operations. Since its launch in 2013, Toast has been building on its original point of sale (POS) software to address each step in the process of getting an order from a customer to the kitchen and back again. Today, the company offers hardware and software solutions including a kitchen display system for cooks, tablet-based and handheld POS devices for waitstaff, payroll and analytics features for managers, and online ordering and delivery options for customers.

The POS space includes some large, well-funded companies, but Toast founders Aman Narang ’04 SM ’06, Jonathan Grimm ’07, and Steve Fredette ’06 have stayed focused on the customer and tried to make developing impactful solutions the focal point of everything they do.

That customer-focused mindset has worked: In 2017, Deloitte named Toast the third-fastest-growing technology company in the country, reporting revenue growth over 30,000 percent between 2013 and 2016.

Fredette says they didn’t realize how special their company was until their fundraising round last year, when Toast was valued at $1.4 billion.

“Once we started talking to investors who had compared our metrics to our competitors and seen the whole market, it started to become clear we were doing things differently,” Fredette says. “We’ve had a level of customer success that is much higher, I think, than what others have had. … I think a lot of that ultimately comes down to good execution.”

Just don’t congratulate the founders quite yet. Even now, Fredette says the company is in growth mode, and he still talks about the business like it’s a scrappy startup. That’s a useful way of looking at things if you want to be a market leader in the restaurant industry, which was projected to do more than $800 billion in sales in the U.S. last year. It’s also a perspective that was partially borne out of the founders’ experience at MIT.

“One of the biggest benefits of MIT is just being surrounded by a network of people that are ambitious and thinking about big ideas,” Fredette says. “That's a very positive, infectious thing, and that was certainly influential for me. Coming out of MIT also gives you a confidence that you can do anything. You look around and think, ‘These are the people that are going to change the world, and I’m a part of that group.’”

Perhaps another thing driving the founders is the lack of confidence potential investors showed in the company early on. Then again, Toast’s early operations didn’t exactly inspire visions of Boston’s next billion-dollar startup.

Toast’s three founders set out to start a company after working together at Endeca, a software company that was bought by Oracle in 2011. Their initial idea was to make an ecommerce app for the restaurant industry, but they kept running into problems with the dated POS software many restaurants were using at the time, so they decided to build a better POS system.

After considering some areas to lease office space, the founders decided it would be cheaper to refinish the basement in Narang’s house and set up operations there. For the next nine months, Narang’s wife, who worked as a teacher, would wake up at 6 a.m. to find members of Toast’s small team coding in her basement, and would often go to sleep at night with the same people there.

Investors looking at Toast could be forgiven for failing to see the company’s potential at the time. Although the founders had worked in managerial roles at Endeca, they had very little experience running a startup. Narang and Grimm had majored in computer science at MIT, while Fredette’s degree was in chemistry, and the company’s “operations” looked more like a disheveled group of hackers in a basement — one of whom was seriously testing his wife’s patience.

Still, Fredette says some of Toast’s first customers were ditching market-leading POS solutions like Square and Micro for the company’s early product.

“We were always very customer-driven,” Fredette says. “Not having spent a lot of time in the restaurant industry ourselves, we didn’t presuppose we knew what our customers needed. We also had a lot of customer-facing experience from Endeca, so the best way to figure out what to build was to work with customers and deeply understand their problems.”

That approach ensured the founders were only building things their customers needed, and they quickly learned there was a lot to build. Fredette says they built five to 10 features for each of their first 10 customers or so until their needs started to converge.

Eventually, the company outgrew Narang’s basement, but the founders still didn’t feel ready to move into an office space, so they rented an apartment in Central Square. Fredette still remembers the unorthodox “office” holiday party Toast threw in December 2013. That arrangement came to an abrupt end when the landlord realized they were running a business.

By that time, however, it was clear Toast was on to something, and the founders finally felt comfortable enough to lease office space. It turned out to be a good investment.

“We couldn’t scale out quickly enough,” Fredette remembers. “We were basically scaling as fast as we could to fulfill what we saw as the demand from the market. It was a good problem to have as a company.”

Fredette says the founders have endured the inevitable pains that come from running a fast-growing company, learning in real-time as they overhauled processes, systems, and teams. Now at 1,400 employees, the founders have learned to look at scaling as an opportunity to improve the company.

They’ve also tried to maintain the spirit of the basement-based coding marathons of their early days by avoiding a top-down development structure and giving people the freedom to work on their own ideas. Fredette says Toast’s leadership team also tries to set big goals for the company.

“One of the most important things in terms of innovation is to have a big vision and set ambitious goals. Necessity is the mother of innovation,” Fredette says. “If you say we need to go to the moon, then innovation often happens. You could say the same thing for a lot of the MIT work that happens in research labs and the early projects that led to the internet. That pursuit of big goals then led to innovation, so I think setting big goals is an important part of a culture of innovation.”

But Fredette believes the best way to maintain success is to do what’s worked since the beginning: stay focused on the customer.