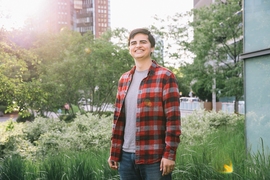 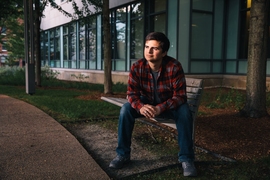 Mason Grimshaw grew up on the Rosebud Sioux Indian Reservation in South Dakota but moved to Rapid City during high school to pursue a better education. When it came time to apply to college, he hopped online, typed “best engineering schools” into Google, and applied to two places: MIT and his father’s alma mater, the South Dakota School of Mines and Technology. He was admitted to both, but when he got into the Institute, his father insisted that he go.

It wasn’t an easy decision, however. Grimshaw felt guilt about leaving his community, where he says that everyone helps each other get by. The move to Rapid City had been difficult enough for him, given that 90 percent of his family lived back at the reservation. Coming to Cambridge was an even bigger step, but his family encouraged him to take the opportunity.

“I didn’t really want to leave home, because that is such a strong community for me. I thought if I did leave, it was only going to be worth it if I could get the best education possible,” he says.

Now a graduate student at the MIT Sloan School of Management working toward a Master of Business Analytics (MBAn) degree, Grimshaw hopes to eventually bring the skills and knowledge he acquires at MIT back home to the reservation.

Looking at the big picture, Grimshaw has aspirations to bring programming to Rosebud. The ultimate dream would be to open a software or web development consulting firm where he could teach community members computer science skills that they could, in turn, teach others. He hopes that through this business, he can equip people in the community with enough technical skills to be able to sustain the company on their own without his help. It’s a long-term goal, but Grimshaw aims high.

After earning his bachelor’s in business analytics at MIT, Grimshaw saw the MBAn as a natural next step. The program teaches students to apply the techniques of data science, programming, machine learning, and optimization to come up with business solutions.

“Because I did it as an undergrad, I thought this stuff was so cool. You can kind of predict the future and help anyone make a better decision. If I was going to be that person to help people make decisions that are important and change people’s lives, I wanted to make sure that I was as prepared as possible,” Grimshaw says.

Surprisingly, Grimshaw did not touch a line of code before coming to MIT. In fact, he entered college intending to study mechanical engineering. But in his first year, his friend was having issues with an assignment for a computer science class, so he decided to help him take a crack at the problem.

The work was fun, Grimshaw says, and coding came naturally for him. Eventually, he dropped his mechanical engineering pursuits and started studying computer science. He later switched majors and applied his computer science education to business analytics.

As a part of his MBAn program, he must complete an analytics capstone project, in which students work with a sponsor organization to create data-driven solutions to specific problems. Grimshaw, along with his program partner Amal Rar, will be working with the Massachusetts Bay Transportation Authority (MBTA) this summer to make The Ride, MBTA’s door-to-door paratransit service, more efficient.

Supported by the Legatum Center for Development and Entrepreneurship, Grimshaw is also currently assisting MIT Sloan Senior Lecturer Anjali Sastry in writing a case study for South African nonprofit RLabs. RLabs seeks to inspire hope by providing business training and consulting to underprivileged South African communities. Grimshaw liked the organization’s mission, and he hopes that working on the RLabs case could give him some ideas about how to bring hope and innovation to his own community back home.

The nonprofit has, in part, inspired some of Grimshaw’s future aspirations for Rosebud. It has also gotten him to think about alternative ways to invest in or give back to communities that don’t necessarily focus on money. Some people, he says, need a place to stay or food more immediately than they need money.

Evaluating those circumstances and developing business models that address those more immediate needs as a form of payment can be a unique alternative to traditional compensation. Grimshaw stresses that monetary compensation is still important, but that being responsive to the specific areas of need within a community also has value.

“There’s a fine line. You can’t just say, ‘These people have nothing so they should just be happy to have a roof over their heads.’ I’m certainly not trying to do that, but there’s a difference in values and in what people place value on. Using that to make your business a little more sustainable is interesting,” Grimshaw says.

The reservation that Grimshaw is from lies within Todd County, an area that was previously listed as one of the poorest in America. He hopes to demonstrate to businesses that it is possible and worthwhile to invest in overlooked areas. He says that a lot of case studies in his field don’t feature stories from the emerging world or rural areas. He wants to show that through creative thinking and problem-solving, companies can work in these places, create jobs, and help lift people out of poverty.

Outside of his studies, Grimshaw mostly spends time with his wife and 5-month-old son, Augustine. His face lights up as he speaks about them.

His wife, Julia, also has a passion for helping people and works as the assistant activities director at Hale House, an assisted senior living facility in Boston. The two of them grew up together and hope to move their family closer to home after Grimshaw finishes his MBAn. For now, their favorite things to do in Boston are going to the Public Gardens (Augustine loves the grass, Grimshaw says), getting a bite at Tasty Burger in Fenway, and watching the “Great British Bake Off” at home.

He also continues to participate in the American Indian Science and Engineering Society (AISES), which he joined as an undergraduate. There were very few members when he arrived at MIT in 2014, and while the number is still small, Grimshaw is enthusiastic about its growth.

“It was pretty cool because when I came here there were four, and on a good day five, of us. I still go to meetings. As I go now, there’s always 10 people, sometimes up to 12 or 15, and it’s awesome to see how much it’s growing,” he says.

While most people going into his field may opt for Silicon Valley or somewhere else on the coasts, Grimshaw would rather take his skill set closer to home. He won’t necessarily move back to Rosebud itself; somewhere within a reasonable driving-distance is more likely. He’s thinking about Denver, with its up-and-coming tech scene, but nothing is set in stone. Wherever he ends up, if a company is interested in helping others through data, Mason Grimshaw is here to help.

Reliable energy for all