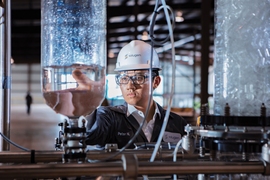 ↓ Download Image
Caption: Solugen's proprietary process for producing hydrogen peroxide uses modified enzymes and inexpensive compounds like sugar. It is currently being used in two pilot facilities that create more than 10 tons of the chemical every day.
Credits: Image courtesy of Solugen 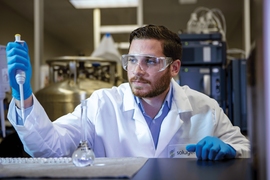 ↓ Download Image
Caption: Solugen's solution may not have been economical even five years ago. The company leverages new techniques for protein design and a maturing industry of protein contract manufacturers to make its bio-based hydrogen peroxide.
Credits: Image courtesy of Solugen

Caption:
Solugen's proprietary process for producing hydrogen peroxide uses modified enzymes and inexpensive compounds like sugar. It is currently being used in two pilot facilities that create more than 10 tons of the chemical every day.
Credits:
Image courtesy of Solugen

Caption:
Solugen's solution may not have been economical even five years ago. The company leverages new techniques for protein design and a maturing industry of protein contract manufacturers to make its bio-based hydrogen peroxide.
Credits:
Image courtesy of Solugen

The large factories that have historically manufactured all of the world’s hydrogen peroxide have new, microscopic competitors: altered protein molecules called enzymes.

Certain enzymes, which quicken the pace of chemical reactions, have long been known to work with hydrogen peroxide in various biological systems. But translating that knowledge into a biological-based way to create hydrogen peroxide has proven difficult — until recently.

For the past few years, the startup Solugen, which was co-founded by an MIT alumnus, has been producing hydrogen peroxide by combining genetically modified enzymes with organic compounds like plant sugars. The reaction creates bio-based hydrogen peroxide as well as organic acids, and the company says this method is cheaper, safer, and less toxic than traditional processes.

Solugen currently has two pilot facilities in Texas that produce more than 10 tons of hydrogen peroxide per month, with a much larger site opening next summer. The technology has the potential to reduce the carbon footprint of an extremely common chemical used for a host of consumer and industrial applications.

Science companies like Solugen are often started by researchers who have spent years studying a specific problem. Their success often hinges on securing government grants or corporate partnerships. But Solugen has a much more colorful history.

The company can attribute its success to research into pancreatic cancer, a Facebook group of float spa enthusiasts, a fruitful splurge at Home Depot, and the emergence of several fields that make Solugen’s solution possible.

Solugen co-founder Gaurab Chakrabarti was in medical school studying pancreatic cancer in 2015 when he discovered an enzyme in cancer cells that could function in extremely high concentrations of hydrogen peroxide.

The enzyme required another expensive chemical to be useful in reactions, so Chakrabarti partnered with Sean Hunt SM ’13 PhD ’16, whom he’d befriended while attending medical school with Hunt’ wife. Hunt was studying more traditional chemical processing methods for his PhD when Chakrabarti showed him the enzyme.

“My background is not in biotech, so I’m kind of the recovering biotech skeptic,” Hunt says. “I learned about enzymes in school, and everyone knew how active and selective they were, but they were just so unstable and hard to manufacture.”

Using computational protein design methods, Hunt and Chakrabarti were able to genetically modify the enzyme to make it produce hydrogen peroxide at room temperature when combined with cheap organic compounds like sugar.

Soon after, the founders were finalists in the 2016 MIT $100K pitch competition, earning $10,000. But they still weren’t sure the technology was worth pursuing.

Then they were contacted by a Facebook group of float spa enthusiasts. Float spas suspend people in salty waters while shutting out all noise and light to help them achieve sensory deprivation. Hydrogen peroxide is used to keep float spa waters clean.

“There’s about 400 float spas in the U.S., and they’re all on one Facebook group, and one owner saw our MIT $100K pitch video and shared it to the Facebook group,” Hunt explains. “That’s really what made us continue Solugen that summer. Because we were contacted by these float spa owners saying, ‘This is how much we pay for peroxide. If you guys can make it, we’ll buy it.’”

Emboldened, the founders rented cheap lab space in Dallas and sent one of their early enzyme designs to a protein manufacturer in China. Then Hunt spent $7,000 at Home Depot to create a pilot reactor he describes as “this little PVC bubble column.”

Running out of money, the founders bought 55 gallon drums of sugar and ran them through the reactor with their enzyme, watching triumphantly as organic acids and hydrogen peroxide came out the other end. The founders began selling all the peroxide they could produce, sometimes sleeping on the floor to keep the reactor running through the night. By December of 2016, they were making $10,000 a month selling pails of peroxide to the float spa community.

The company used its PVC bubble reactor until the summer of 2017, when they built a fully automated reactor capable of producing 10 times more hydrogen peroxide. That’s when they moved into the oil and gas industry.

As companies pump oil and gas out of the ground, they generate large amounts of contaminated salt water that needs to be treated or disposed of. Billions of gallons of such water are produced each month in the U.S. alone. Hydrogen peroxide can be used in the treatment process, but Hunt says the traditional methods for creating hydrogen peroxide leave a large carbon footprint associated with the constant venting of the working solution.

“What I really love about this is it’s a true environmental crisis that I think we’re making a big difference on,” Hunt says, noting other chemicals used to treat wastewater are extremely toxic.

Solugen’s current production facilities ship concentrated forms of hydrogen peroxide, but the founders plan on building “minimills” next to oil and gas plants that don’t require concentration and dilution to further reduce costs and improve sustainability.

“When we were building these things out, we realized that because we’re doing all this chemistry with enzymes where it’s room temperature, in water, and low pressure, it’s very safe, and as a result we can build these small plants,” Hunt says. “That’s really exciting for us. … For instance, you can sell hydrogen peroxide for $2 a gallon. It costs $1.50 a gallon just to ship it to the customer. The freight is almost the price of the chemical. And in some instances, it’s more than the chemical itself.”

Solugen’s solution is also intriguing because it couldn’t have existed until recently. To make its proprietary enzymes, the company says it’s leveraging new methods for computational protein design and genetic engineering. It also relies on an industry of protein contract manufacturers that can produce large amounts of the enzymes less expensively than what would have been possible even five years ago.

Looking forward, Hunt says Solugen’s infrastructure could be used to co-produce hundreds of different organic acids by changing the enzymes and compounds being mixed. One of the co-products he’s most excited about is acetic acid, which is used to make vinegar. Acetic acid is also used in the production of important materials like polyester fiber and plastic.

“Hydrogen peroxide and acetic acid are fundamental building blocks for our economy,” Hunt says. “We see Solugen as a platform [for other solutions]. In the long term, that’s what really excites us.”

Sean Hunt PhD ’16, M. Eng ’13 and Gaurab Chakrabarti co-founded Solugen after discovering a way to make chemicals from corn syrup instead of fossil fuels, reports Adele Peters for Fast Company. “Based on a detailed analysis of current products, the company estimates that it could theoretically produce 90% of the chemicals that are now produced by fossil fuels,” writes Peters.