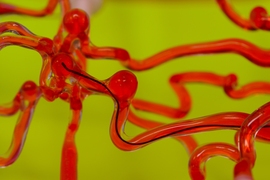 ↓ Download Image
Caption: MIT engineers have developed robotic thread (in black) that can be steered magnetically and is small enough to work through narrow spaces such as the vasculature of the human brain. The researchers envision the technology may be used in the future to clear blockages in patients with stroke and aneurysms.
Credits: Image courtesy of the researchers

Caption:
MIT engineers have developed robotic thread (in black) that can be steered magnetically and is small enough to work through narrow spaces such as the vasculature of the human brain. The researchers envision the technology may be used in the future to clear blockages in patients with stroke and aneurysms.
Credits:
Image courtesy of the researchers

MIT engineers have developed a magnetically steerable, thread-like robot that can actively glide through narrow, winding pathways, such as the labrynthine vasculature of the brain.

In the future, this robotic thread may be paired with existing endovascular technologies, enabling doctors to remotely guide the robot through a patient’s brain vessels to quickly treat blockages and lesions, such as those that occur in aneurysms and stroke.

“Stroke is the number five cause of death and a leading cause of disability in the United States. If acute stroke can be treated within the first 90 minutes or so, patients’ survival rates could increase significantly,” says Xuanhe Zhao, associate professor of mechanical engineering and of civil and environmental engineering at MIT. “If we could design a device to reverse blood vessel blockage within this ‘golden hour,’ we could potentially avoid permanent brain damage. That’s our hope.”

In a tight spot

To clear blood clots in the brain, doctors often perform an endovascular procedure, a minimally invasive surgery in which a surgeon inserts a thin wire through a patient’s main artery, usually in the leg or groin. Guided by a fluoroscope that simultaneously images the blood vessels using X-rays, the surgeon then manually rotates the wire up into the damaged brain vessel. A catheter can then be threaded up along the wire to deliver drugs or clot-retrieval devices to the affected region.

Kim says the procedure can be physically taxing, requiring surgeons, who must be specifically trained in the task, to endure repeated radiation exposure from fluoroscopy.

“It’s a demanding skill, and there are simply not enough surgeons for the patients, especially in suburban or rural areas,” Kim says.

The medical guidewires used in such procedures are passive, meaning they must be manipulated manually, and are typically made from a core of metallic alloys, coated in polymer, a material that Kim says could potentially generate friction and damage vessel linings if the wire were to get temporarily stuck in a particularly tight space.

The team realized that developments in their lab could help improve such endovascular procedures, both in the design of the guidewire and in reducing doctors’ exposure to any associated radiation. 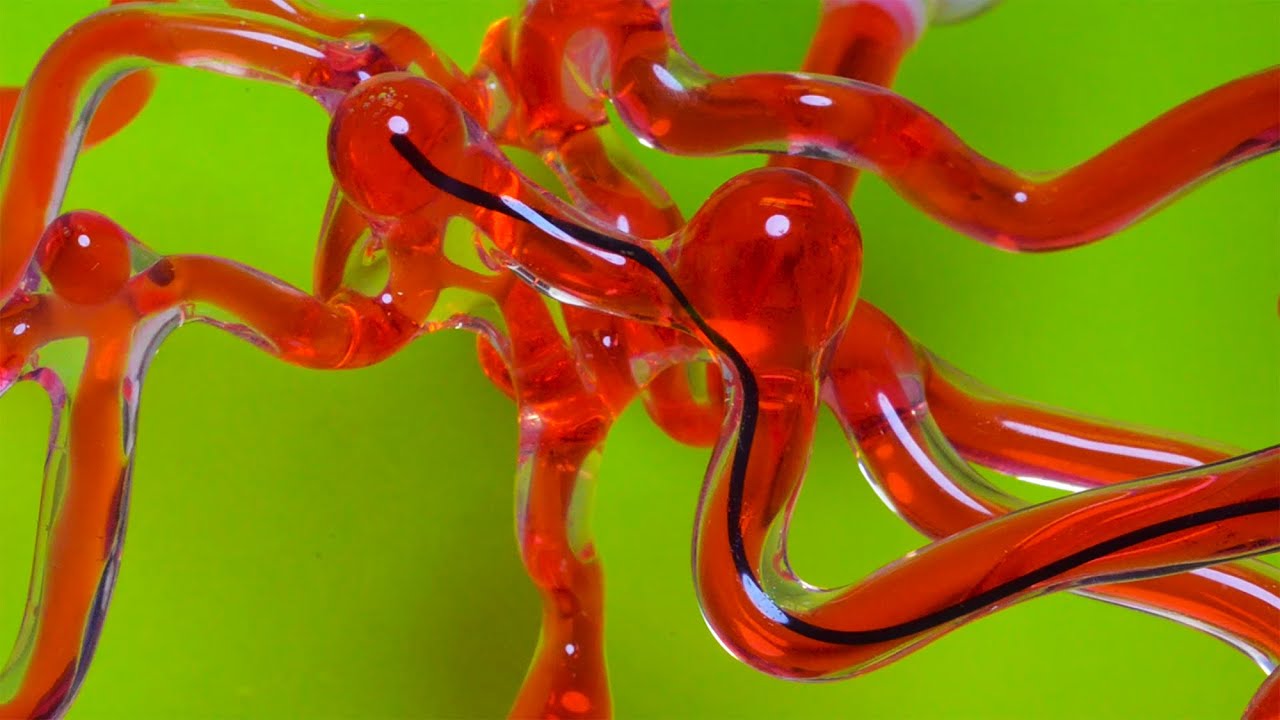 Over the past few years, the team has built up expertise in both hydrogels — biocompatible materials made mostly of water — and 3-D-printed magnetically-actuated materials that can be designed to crawl, jump, and even catch a ball, simply by following the direction of a magnet.

In this new paper, the researchers combined their work in hydrogels and in magnetic actuation, to produce a magnetically steerable, hydrogel-coated robotic thread, or guidewire, which they were able to make thin enough to magnetically guide through a life-size silicone replica of the brain’s blood vessels.

The core of the robotic thread is made from nickel-titanium alloy, or “nitinol,” a material that is both bendy and springy. Unlike a clothes hanger, which would retain its shape when bent, a nitinol wire would return to its original shape, giving it more flexibility in winding through tight, tortuous vessels. The team coated the wire’s core in a rubbery paste, or ink, which they embedded throughout with magnetic particles.

Finally, they used a chemical process they developed previously, to coat and bond the magnetic covering with hydrogel — a material that does not affect the responsiveness of the underlying magnetic particles and yet provides the wire with a smooth, friction-free, biocompatible surface.

They demonstrated the robotic thread’s precision and activation by using a large magnet, much like the strings of a marionette, to steer the thread through an obstacle course of small rings, reminiscent of a thread working its way through the eye of a needle.

The researchers also tested the thread in a life-size silicone replica of the brain’s major blood vessels, including clots and aneurysms, modeled after the CT scans of an actual patient’s brain. The team filled the silicone vessels with a liquid simulating the viscosity of blood, then manually manipulated a large magnet around the model to steer the robot through the vessels’ winding, narrow paths.

Kim says the robotic thread can be functionalized, meaning that features can be added — for example, to deliver clot-reducing drugs or break up blockages with laser light. To demonstrate the latter, the team replaced the thread’s nitinol core with an optical fiber and found that they could magnetically steer the robot and activate the laser once the robot reached a target region.

When the researchers ran comparisons between the robotic thread coated versus uncoated with hydrogel, they found that the hydrogel gave the thread a much-needed, slippery advantage, allowing it to glide through tighter spaces without getting stuck. In an endovascular surgery, this property would be key to preventing friction and injury to vessel linings as the thread works its way through.

“One of the challenges in surgery has been to be able to navigate through complicated blood vessels in the brain, which has a very small diameter, where commercial catheters can’t reach,” says Kyujin Cho, professor of mechanical engineering at Seoul National University. “This research has shown potential to overcome this challenge and enable surgical procedures in the brain without open surgery.”

And just how can this new robotic thread keep surgeons radiation-free? Kim says that a magnetically steerable guidewire does away with the necessity for surgeons to physically push a wire through a patient’s blood vessels. This means that doctors also wouldn’t have to be in close proximity to a patient, and more importantly, the radiation-generating fluoroscope.

In the near future, he envisions endovascular surgeries that incorporate existing magnetic technologies, such as pairs of large magnets, the directions of which doctors can manipulate from just outside the operating room, away from the fluoroscope imaging the patient’s brain, or even in an entirely different location.

“Existing platforms could apply magnetic field and do the fluoroscopy procedure at the same time to the patient, and the doctor could be in the other room, or even in a different city, controlling the magnetic field with a joystick,” Kim says. “Our hope is to leverage existing technologies to test our robotic thread in vivo in the next step.”

This research was funded, in part, by the Office of Naval Research, the MIT Institute for Soldier Nanotechnologies, and the National Science Foundation (NSF).

Smithsonian reporter Jason Daley writes that MIT researcher have created a new magnetically-controlled robotic thread that can wind its way through the human brain. “In the future, it could move through blood vessels in the brain to help clear blockages,” Daley explains.

Motherboard reporter Becky Ferreira writes that MIT researchers have developed a robotic thread that could be used to treat neurological blood clots or strokes. The robot could be equipped with drugs or lasers “that could be delivered to problem areas in the brain. This type of minimally invasive technique may also be useful in mitigating damage from neurological emergencies such as strokes.”

TechCrunch reporter Darrell Etherington writes that MI researchers have developed a new robotic thread that could be used to make brain surgeries less invasive. Etherington explains that the new robotic threads could “potentially make it easier and more accessible to treat brain blood vessel issues like blockages and lesions that can cause aneurysms and strokes.”

MIT researchers have developed a new magnetically-controlled robotic worm that could one day help make brain surgeries less invasive, reports Chris Stokel-Walker for New Scientist. When tested on a silicon model of the human brain, “the robot could worm its way through hard-to-reach blood vessels.”

Gizmodo reporter Andrew Liszewski writes that a new thread-like robotic work developed by MIT researchers could be used to quickly clear blockages and clots that lead to strokes. “The robot would not only make the post-stroke procedure faster and faster, but it would also reduce the exposure to radiation that surgeons often have to endure,” Liszewski explains.

Ingestible, expanding pill monitors the stomach for up to a month