Ingestible, expanding pill monitors the stomach for up to a month 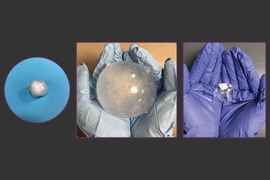 ↓ Download Image
Caption: The ingestible hydrogel device as a small pill can swell to a large soft sphere, and deswell to a floppy membrane.
Credits: Image: Xinyue Liu, Shaoting Lin 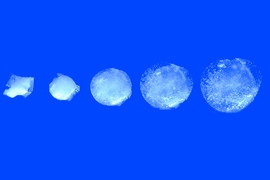 Caption:
The ingestible hydrogel device as a small pill can swell to a large soft sphere, and deswell to a floppy membrane.
Credits:
Image: Xinyue Liu, Shaoting Lin

MIT engineers have designed an ingestible, Jell-O-like pill that, upon reaching the stomach, quickly swells to the size of a soft, squishy ping-pong ball big enough to stay in the stomach for an extended period of time.

The inflatable pill is embedded with a sensor that continuously tracks the stomach’s temperature for up to 30 days. If the pill needs to be removed from the stomach, a patient can drink a solution of calcium that triggers the pill to quickly shrink to its original size and pass safely out of the body.

The new pill is made from two types of hydrogels — mixtures of polymers and water that resemble the consistency of Jell-O. The combination enables the pill to quickly swell in the stomach while remaining impervious to the stomach’s churning acidic environment.

The hydrogel-based design is softer, more biocompatible, and longer-lasting than current ingestible sensors, which either can only remain in the stomach for a few days, or are made from hard plastics or metals that are orders of magnitude stiffer than the gastrointestinal tract.

“The dream is to have a Jell-O-like smart pill, that once swallowed stays in the stomach and monitors the patient’s health for a long time such as a month,” says Xuanhe Zhao, associate professor of mechanical engineering at MIT.

Zhao and senior collaborator Giovanni Traverso, a visiting scientist who will join the MIT faculty in 2019, along with lead authors Xinyue Liu, Christoph Steiger, and Shaoting Lin, have published their results today in Nature Communications. 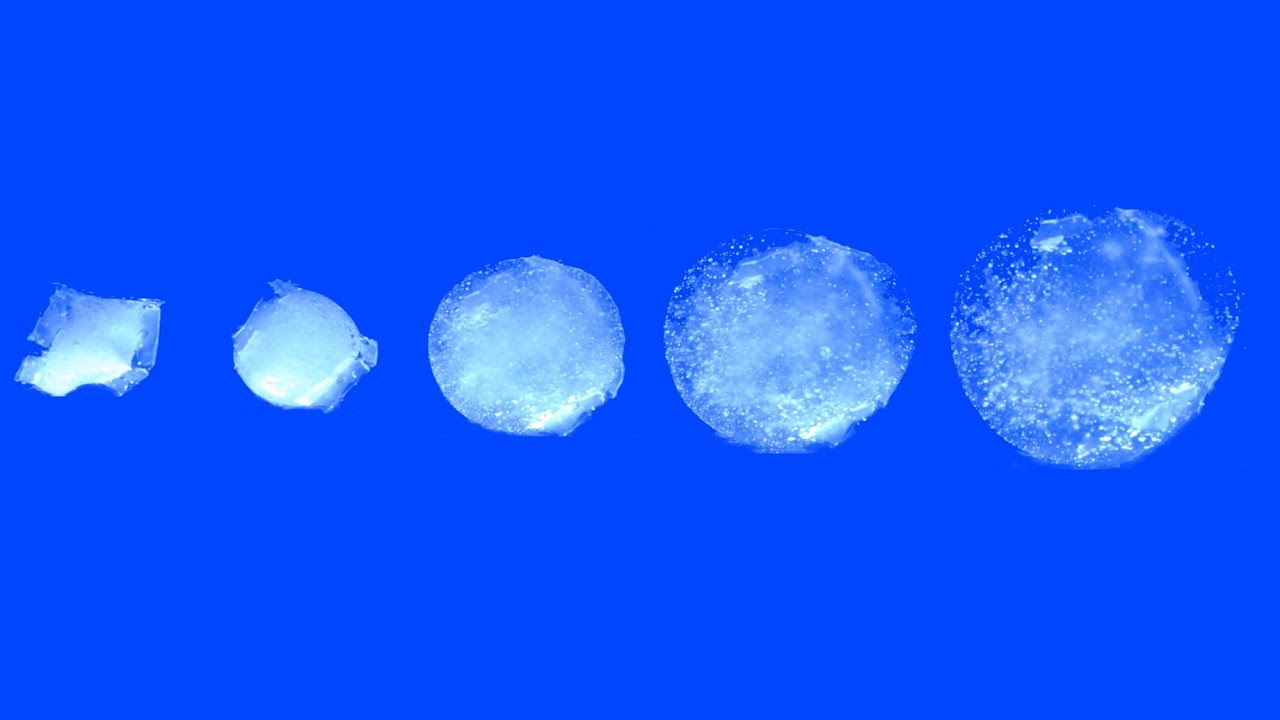 The design for the new inflatable pill is inspired by the defense mechanisms of the pufferfish, or blowfish. Normally a slow-moving species, the pufferfish will quickly inflate when threatened, like a spiky balloon. It does so by sucking in a large amount of water, fast.

The puffer’s tough, fast-inflating body was exactly what Zhao was looking to replicate in hydrogel form. The team had been looking for ways to design a hydrogel-based pill to carry sensors into the stomach and stay there to monitor, for example, vital signs or disease states for a relatively long period of time.

“Currently, when people try to design these highly swellable gels, they usually use diffusion, letting water gradually diffuse into the hydrogel network,” Liu says. “But to swell to the size of a ping-pong ball takes hours, or even days. It’s longer than the emptying time of the stomach.”

The researchers instead looked for ways to design a hydrogel pill that could inflate much more quickly, at a rate comparable to that of a startled pufferfish.

A new hydrogel device swells to more than twice its size in just a few minutes in water.

The design they ultimately landed on resembles a small, Jell-O-like capsule, made from two hydrogel materials. The inner material contains sodium polyacrylate — superabsorbent particles that are used in commercial products such as diapers for their ability to rapidly soak up liquid and inflate.

The researchers realized, however, that if the pill were made only from these particles, it would immediately break apart and pass out of the stomach as individual beads. So they designed a second, protective hydrogel layer to encapsulate the fast-swelling particles. This outer membrane is made from a multitude of nanoscopic, crystalline chains, each folded over another, in a nearly impenetrable, gridlock pattern — an “anti-fatigue” feature that the researchers reported in an earlier paper.

“You would have to crack through many crystalline domains to break this membrane,” Lin says. “That’s what makes this hydrogel extremely robust, and at the same time, soft.”

In the lab, the researchers dunked the pill in various solutions of water and fluid resembling gastric juices, and found the pill inflated to 100 times its original size in about 15 minutes — much faster than existing swellable hydrogels. Once inflated, Zhao says the pill is about the softness of tofu or Jell-O, yet surprisingly strong.

To test the pill’s toughness, the researchers mechanically squeezed it thousands of times, at forces even greater than what the pill would experience from regular contractions in the stomach.

“The stomach applies thousands to millions of cycles of load to grind food down,” Lin explains. “And we found that even when we make a small cut in the membrane, and then stretch and squeeze it thousands of times, the cut does not grow larger. Our design is very robust.”

The researchers further determined that a solution of calcium ions, at a concentration higher than what’s in milk, can shrink the swollen particles. This triggers the pill to deflate and pass out of the stomach.

Finally, Steiger and Traverso embedded small, commercial temperature sensors into several pills, and fed the pills to pigs, which have stomachs and gastrointestinal tracts very similar to humans. The team later retrieved the temperature sensors from the pigs’ stool and plotted the sensors’ temperature measurements over time. They found that the sensor was able to accurately track the animals’ daily activity patterns up to 30 days.

“Ingestible electronics is an emerging area to monitor important physiological conditions and biomarkers,” says Hanqing Jiang, a professor of mechanical and aerospace engineering at Arizona State University, who was not involved in the work. “Conventional ingestible electronics are made of non-bio-friendly materials. Professor Zhao’s group is making a big leap on the development of biocompatible and soft but tough gel-based ingestible devices, which significantly extends the horizon of ingestible electronics. It also represents a new application of tough hydrogels that the group has been devoted to for years.”

Down the road, the researchers envision the pill may safely deliver a number of different sensors to the stomach to monitor, for instance, pH levels, or signs of certain bacteria or viruses. Tiny cameras may also be embedded into the pills to image the progress of tumors or ulcers, over the course of several weeks. Zhao says the pill might also be used as a safer, more comfortable alternative to the gastric balloon diet, a form of diet control in which a balloon is threaded through a patient’s esophagus and into the stomach, using an endoscope.

“With our design, you wouldn’t need to go through a painful process to implant a rigid balloon,” Zhao says. “Maybe you can take a few of these pills instead, to help fill out your stomach, and lose weight. We see many possibilities for this hydrogel device.”

This research was supported, in part, by the National Science Foundation, National Institutes of Health, and the Bill and Melinda Gates Foundation.

Researchers at MIT have developed an expandable pill that can stay in the stomach for a month and could potentially track issues like ulcers and cancers. “The pill is made from two types of hydrogels -- mixtures of polymers and water -- making it softer and longer-lasting than current ingestible sensors,” reports Robert Preidt for HealthDay.

MIT researchers have developed a new ingestible pill that expands once it reaches the stomach and could be used to monitor a patient’s health, reports the BBC News. “The dream is to have a smart pill, that once swallowed stays in the stomach and monitors the patient's health for a long time, such as a month,” explains Prof. Xuanhe Zhao.

Washington Post reporter Peter Holley writes that MIT researchers have developed a new ingestible, expanding pill that can remain in the stomach for up to a month and could be used to help with weight loss or to monitor conditions inside the human body. “The pills could also be used to place tiny cameras inside the body that could monitor tumors and ulcers over time,” Holley explains.