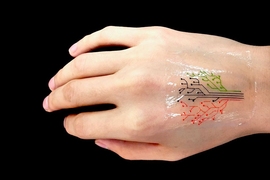 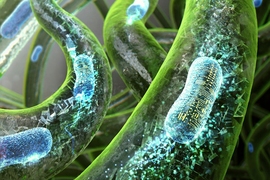 Caption:
MIT engineers have devised a 3-D printing technique that uses a new kind of ink made from genetically programmed living cells.

Caption:
MIT engineers have devised a 3-D printing technique that uses a new kind of ink made from genetically programmed living cells.

MIT engineers have devised a 3-D printing technique that uses a new kind of ink made from genetically programmed living cells.

The cells are engineered to light up in response to a variety of stimuli. When mixed with a slurry of hydrogel and nutrients, the cells can be printed, layer by layer, to form three-dimensional, interactive structures and devices.

The team has then demonstrated its technique by printing a “living tattoo” — a thin, transparent patch patterned with live bacteria cells in the shape of a tree. Each branch of the tree is lined with cells sensitive to a different chemical or molecular compound. When the patch is adhered to skin that has been exposed to the same compounds, corresponding regions of the tree light up in response.

The researchers, led by Xuanhe Zhao, the Noyce Career Development Professor in MIT’s Department of Mechanical Engineering, and Timothy Lu, associate professor of biological engineering and of electrical engineering and computer science, say that their technique can be used to fabricate “active” materials for wearable sensors and interactive displays. Such materials can be patterned with live cells engineered to sense environmental chemicals and pollutants as well as changes in pH and temperature.

What’s more, the team developed a model to predict the interactions between cells within a given 3-D-printed structure, under a variety of conditions. The team says researchers can use the model as a guide in designing responsive living materials.

In recent years, scientists have explored a variety of responsive materials as the basis for 3D-printed inks. For instance, scientists have used inks made from temperature-sensitive polymers to print heat-responsive shape-shifting objects. Others have printed photoactivated structures from polymers that shrink and stretch in response to light.

Zhao’s team, working with bioengineers in Lu’s lab, realized that live cells might also serve as responsive materials for 3D-printed inks, particularly as they can be genetically engineered to respond to a variety of stimuli. The researchers are not the first to consider 3-D printing genetically engineered cells; others have attempted to do so using live mammalian cells, but with little success.

“It turns out those cells were dying during the printing process, because mammalian cells are basically lipid bilayer balloons,” Yuk says. “They are too weak, and they easily rupture.”

Instead, the team identified a hardier cell type in bacteria. Bacterial cells have tough cell walls that are able to survive relatively harsh conditions, such as the forces applied to ink as it is pushed through a printer’s nozzle. Furthermore, bacteria, unlike mammalian cells, are compatible with most hydrogels — gel-like materials that are made from a mix of mostly water and a bit of polymer. The group found that hydrogels can provide an aqueous environment that can support living bacteria.

The researchers carried out a screening test to identify the type of hydrogel that would best host bacterial cells. After an extensive search, a hydrogel with pluronic acid was found to be the most compatible material. The hydrogel also exhibited an ideal consistency for 3-D printing.

“This hydrogel has ideal flow characteristics for printing through a nozzle,” Zhao says. “It’s like squeezing out toothpaste. You need [the ink] to flow out of a nozzle like toothpaste, and it can maintain its shape after it’s printed.”

From tattoos to living computers

Lu provided the team with bacterial cells engineered to light up in response to a variety of chemical stimuli. The researchers then came up with a recipe for their 3-D ink, using a combination of bacteria, hydrogel, and nutrients to sustain the cells and maintain their functionality.

“We found this new ink formula works very well and can print at a high resolution of about 30 micrometers per feature,” Zhao says. “That means each line we print contains only a few cells. We can also print relatively large-scale structures, measuring several centimeters.”

They printed the ink using a custom 3-D printer that they built using standard elements combined with fixtures they machined themselves. To demonstrate the technique, the team printed a pattern of hydrogel with cells in the shape of a tree on an elastomer layer. After printing, they solidified, or cured, the patch by exposing it to ultraviolet radiation. They then adhere the transparent elastomer layer with the living patterns on it, to skin.

To test the patch, the researchers smeared several chemical compounds onto the back of a test subject’s hand, then pressed the hydrogel patch over the exposed skin. Over several hours, branches of the patch’s tree lit up when bacteria sensed their corresponding chemical stimuli.

The researchers also engineered bacteria to communicate with each other; for instance they programmed some cells to light up only when they receive a certain signal from another cell. To test this type of communication in a 3-D structure, they printed a thin sheet of hydrogel filaments with “input,” or signal-producing bacteria and chemicals, overlaid with another layer of filaments of an “output,” or signal-receiving bacteria. They found the output filaments lit up only when they overlapped and received input signals from corresponding bacteria .

Yuk says in the future, researchers may use the team’s technique to print “living computers” — structures with multiple types of cells that communicate with each other, passing signals back and forth, much like transistors on a microchip.

“This is very future work, but we expect to be able to print living computational platforms that could be wearable,” Yuk says.

For more near-term applications, the researchers are aiming to fabricate customized sensors, in the form of flexible patches and stickers that could be engineered to detect a variety of chemical and molecular compounds. They also envision their technique may be used to manufacture drug capsules and surgical implants, containing cells engineered produce compounds such as glucose, to be released therapeutically over time.

“We can use bacterial cells like workers in a 3-D factory,” Liu says. “They can be engineered to produce drugs within a 3-D scaffold, and applications should not be confined to epidermal devices. As long as the fabrication method and approach are viable, applications such as implants and ingestibles should be possible.”

This research was supported, in part, by the Office of Naval Research, National Science Foundation, National Institutes of Health, and MIT Institute for Soldier Nanotechnologies.

MIT researchers have developed a new technique to 3-D print genetically engineered bacteria into a variety of shapes and forms, reports Karen Hao for Quartz. The technique could eventually be used to develop such devices as, “an ingestible living robot that secretes the correct drug when it detects a tumor.”

Co.Design reporter Katharine Schwab writes that MIT researchers have developed a tattoo made of living cells that activate when exposed to different kinds of stimuli. Schwab explains that in the future the tattoos could be designed, “so that they respond to environmental pollutants or changes in temperature.”

MIT engineers have developed a method to 3-D print living cells into tattoos and 3-D structures, reports Danny Paez for Inverse. Paez explains that the researchers believe the technique, “could possibly be used to create a ‘living computer,’ or a structure made up of living cells that can do the stuff your laptop can.”