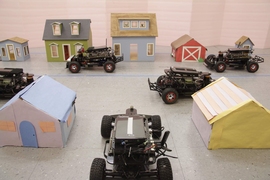 ↓ Download Image
Caption: MIT and Toyota researchers have designed a new model that weighs various uncertainties and risks to help autonomous vehicles determine when it’s safe to merge into traffic at intersections with objects obstructing views, such as buildings blocking the line of sight.
Credits: Image courtesy of the researchers 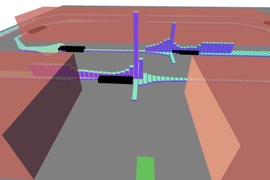 ↓ Download Image
Caption: Risk is visualized here by vertical bars. Higher vertical bars indicate higher likelihood that that specific spot in the intersection is occupied by another vehicle, so it’s unsafe to pull into the road. Instead, the vehicle must wait for a safe gap or nudge forward to gather more data.
Credits: Image courtesy of the researchers

Caption:
MIT and Toyota researchers have designed a new model that weighs various uncertainties and risks to help autonomous vehicles determine when it’s safe to merge into traffic at intersections with objects obstructing views, such as buildings blocking the line of sight.
Credits:
Image courtesy of the researchers

Caption:
Risk is visualized here by vertical bars. Higher vertical bars indicate higher likelihood that that specific spot in the intersection is occupied by another vehicle, so it’s unsafe to pull into the road. Instead, the vehicle must wait for a safe gap or nudge forward to gather more data.
Credits:
Image courtesy of the researchers

MIT and Toyota researchers have designed a new model to help autonomous vehicles determine when it’s safe to merge into traffic at intersections with obstructed views.

Navigating intersections can be dangerous for driverless cars and humans alike. In 2016, roughly 23 percent of fatal and 32 percent of nonfatal U.S. traffic accidents occurred at intersections, according to a 2018 Department of Transportation study. Automated systems that help driverless cars and human drivers steer through intersections can require direct visibility of the objects they must avoid. When their line of sight is blocked by nearby buildings or other obstructions, these systems can fail.

The researchers developed a model that instead uses its own uncertainty to estimate the risk of potential collisions or other traffic disruptions at such intersections. It weighs several critical factors, including all nearby visual obstructions, sensor noise and errors, the speed of other cars, and even the attentiveness of other drivers. Based on the measured risk, the system may advise the car to stop, pull into traffic, or nudge forward to gather more data.

“When you approach an intersection there is potential danger for collision. Cameras and other sensors require line of sight. If there are occlusions, they don’t have enough visibility to assess whether it’s likely that something is coming,” says Daniela Rus, director of the Computer Science and Artificial Intelligence Laboratory (CSAIL) and the Andrew and Erna Viterbi Professor of Electrical Engineering and Computer Science. “In this work, we use a predictive-control model that’s more robust to uncertainty, to help vehicles safely navigate these challenging road situations.”

The researchers tested the system in more than 100 trials of remote-controlled cars turning left at a busy, obstructed intersection in a mock city, with other cars constantly driving through the cross street. Experiments involved fully autonomous cars and cars driven by humans but assisted by the system. In all cases, the system successfully helped the cars avoid collision from 70 to 100 percent of the time, depending on various factors. Other similar models implemented in the same remote-control cars sometimes couldn’t complete a single trial run without a collision.

The model is specifically designed for road junctions in which there is no stoplight and a car must yield before maneuvering into traffic at the cross street, such as taking a left turn through multiple lanes or roundabouts. In their work, the researchers split a road into small segments. This helps the model determine if any given segment is occupied to estimate a conditional risk of collision.

Autonomous cars are equipped with sensors that measure the speed of other cars on the road. When a sensor clocks a passing car traveling into a visible segment, the model uses that speed to predict the car’s progression through all other segments. A probabilistic “Bayesian network” also considers uncertainties — such as noisy sensors or unpredictable speed changes — to determine the likelihood that each segment is occupied by a passing car.

Because of nearby occlusions, however, this single measurement may not suffice. Basically, if a sensor can’t ever see a designated road segment, then the model assigns it a high likelihood of being occluded. From where the car is positioned, there’s increased risk of collision if the car just pulls out fast into traffic. This encourages the car to nudge forward to get a better view of all occluded segments. As the car does so, the model lowers its uncertainty and, in turn, risk.

But even if the model does everything correctly, there’s still human error, so the model also estimates the awareness of other drivers. “These days, drivers may be texting or otherwise distracted, so the amount of time it takes to react may be a lot longer,” McGill says. “We model that conditional risk, as well.”

The model sums all risk estimates from traffic speed, occlusions, noisy sensors, and driver awareness. It also considers how long it will take the autonomous car to steer a preplanned path through the intersection, as well as all safe stopping spots for crossing traffic. This produces a total risk estimate.

That risk estimate gets updated continuously for wherever the car is located at the intersection. In the presence of multiple occlusions, for instance, it’ll nudge forward, little by little, to reduce uncertainty. When the risk estimate is low enough, the model tells the car to drive through the intersection without stopping. Lingering in the middle of the intersection for too long, the researchers found, also increases risk of a collision.

Running the model on remote-control cars in real-time indicates that it’s efficient and fast enough to deploy into full-scale autonomous test cars in the near future, the researchers say. (Many other models are too computationally heavy to run on those cars.) The model still needs far more rigorous testing before being used for real-world implementation in production vehicles.

The model would serve as a supplemental risk metric that an autonomous vehicle system can use to better reason about driving through intersections safely. The model could also potentially be implemented in certain “advanced driver-assistive systems” (ADAS), where humans maintain shared control of the vehicle.

Next, the researchers aim to include other challenging risk factors in the model, such as the presence of pedestrians in and around the road junction.