Putting the “bang” in the Big Bang 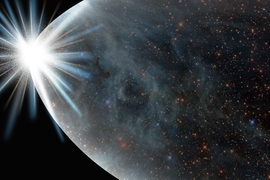 As the Big Bang theory goes, somewhere around 13.8 billion years ago the universe exploded into being, as an infinitely small, compact fireball of matter that cooled as it expanded, triggering reactions that cooked up the first stars and galaxies, and all the forms of matter that we see (and are) today.

Just before the Big Bang launched the universe onto its ever-expanding course, physicists believe, there was another, more explosive phase of the early universe at play: cosmic inflation, which lasted less than a trillionth of a second. During this period, matter — a cold, homogeneous goop — inflated exponentially quickly before processes of the Big Bang took over to more slowly expand and diversify the infant universe.

Recent observations have independently supported theories for both the Big Bang and cosmic inflation. But the two processes are so radically different from each other that scientists have struggled to conceive of how one followed the other.

Now physicists at MIT, Kenyon College, and elsewhere have simulated in detail an intermediary phase of the early universe that may have bridged cosmic inflation with the Big Bang. This phase, known as “reheating,” occurred at the end of cosmic inflation and involved processes that wrestled inflation’s cold, uniform matter into the ultrahot, complex soup that was in place at the start of the Big Bang.

“The postinflation reheating period sets up the conditions for the Big Bang, and in some sense puts the ‘bang’ in the Big Bang,” says David Kaiser, the Germeshausen Professor of the History of Science and professor of physics at MIT. “It’s this bridge period where all hell breaks loose and matter behaves in anything but a simple way.”

Kaiser and his colleagues simulated in detail how multiple forms of matter would have interacted during this chaotic period at the end of inflation. Their simulations show that the extreme energy that drove inflation could have been redistributed just as quickly, within an even smaller fraction of a second, and in a way that produced conditions that would have been required for the start of the Big Bang.

The team found this extreme transformation would have been even faster and more efficient if quantum effects modified the way that matter responded to gravity at very high energies, deviating from the way Einstein’s theory of general relativity predicts matter and gravity should interact.

“This enables us to tell an unbroken story, from inflation to the postinflation period, to the Big Bang and beyond,” Kaiser says. “We can trace a continuous set of processes, all with known physics, to say this is one plausible way in which the universe came to look the way we see it today.”

“In sync with itself”

The theory of cosmic inflation, first proposed in the 1980s by MIT’s Alan Guth, the V.F. Weisskopf Professor of Physics, predicts that the universe began as an extremely small speck of matter, possibly about a hundred-billionth the size of a proton. This speck was filled with ultra-high-energy matter, so energetic that the pressures within generated a repulsive gravitational force — the driving force behind inflation. Like a spark to a fuse, this gravitational force exploded the infant universe outward, at an ever-faster rate, inflating it to nearly an octillion times its original size (that’s the number 1 followed by 26 zeroes), in less than a trillionth of a second.

Kaiser and his colleagues attempted to work out what the earliest phases of reheating — that bridge interval at the end of cosmic inflation and just before the Big Bang — might have looked like.

“The earliest phases of reheating should be marked by resonances. One form of high-energy matter dominates, and it’s shaking back and forth in sync with itself across large expanses of space, leading to explosive production of new particles,” Kaiser says. “That behavior won’t last forever, and once it starts transferring energy to a second form of matter, its own swings will get more choppy and uneven across space. We wanted to measure how long it would take for that resonant effect to break up, and for the produced particles to scatter off each other and come to some sort of thermal equilibrium, reminiscent of Big Bang conditions.”

The team’s computer simulations represent a large lattice onto which they mapped multiple forms of matter and tracked how their energy and distribution changed in space and over time as the scientists varied certain conditions. The simulation’s initial conditions were based on a particular inflationary model — a set of predictions for how the early universe’s distribution of matter may have behaved during cosmic inflation.

The scientists chose this particular model of inflation over others because its predictions closely match high-precision measurements of the cosmic microwave background — a remnant glow of radiation emitted just 380,000 years after the Big Bang, which is thought to contain traces of the inflationary period.

The simulation tracked the behavior of two types of matter that may have been dominant during inflation, very similar to a type of particle, the Higgs boson, that was recently observed in other experiments.

Before running their simulations, the team added a slight “tweak” to the model’s description of gravity. While ordinary matter that we see today responds to gravity just as Einstein predicted in his theory of general relativity, matter at much higher energies, such as what’s thought to have existed during cosmic inflation, should behave slightly differently, interacting with gravity in ways that are modified by quantum mechanics, or interactions at the atomic scale.

In Einstein’s theory of general relativity, the strength of gravity is represented as a constant, with what physicists refer to as a minimal coupling, meaning that, no matter the energy of a particular particle, it will respond to gravitational effects with a strength set by a universal constant.

However, at the very high energies that are predicted in cosmic inflation, matter interacts with gravity in a slightly more complicated way. Quantum-mechanical effects predict that the strength of gravity can vary in space and time when interacting with ultra-high-energy matter — a phenomenon known as nonminimal coupling.

Kaiser and his colleagues incorporated a nonminimal coupling term to their inflationary model and observed how the distribution of matter and energy changed as they turned this quantum effect up or down.

In the end they found that the stronger the quantum-modified gravitational effect was in affecting matter, the faster the universe transitioned from the cold, homogeneous matter in inflation to the much hotter, diverse forms of matter that are characteristic of the Big Bang.

By tuning this quantum effect, they could make this crucial transition take place over 2 to 3 “e-folds,” referring to the amount of time it takes for the universe to (roughly) triple in size. In this case, they managed to simulate the reheating phase within the time it takes for the universe to triple in size two to three times. By comparison, inflation itself took place over about 60 e-folds.

“Reheating was an insane time, when everything went haywire,” Kaiser says. “We show that matter was interacting so strongly at that time that it could relax correspondingly quickly as well, beautifully setting the stage for the Big Bang. We didn’t know that to be the case, but that’s what’s emerging from these simulations, all with known physics. That’s what’s exciting for us.”

Guth, the original architect for the theory of cosmic inflation, sees the group’s results as an important new development in the study of inflationary models.

“While versions of inflation based on a single form of matter give a remarkably good fit to observations, Dave and his collaborators have for a number of years been studying well-motivated models that involve multiple forms of matter… also giving an excellent fit to the data,” Guth says. “Until now, however, the work has been limited to studying the early stages of the ending of inflation, where the math is relatively simple. The new work is based on a high-powered numerical lattice simulation which can probe much further into the complicated interactions at the end of inflation. The work shows more definitively than ever that a large class of models involving multiple forms of matter are in excellent agreement with observations.”

“There are hundreds of proposals for producing the inflationary phase, but the transition between the inflationary phase and the so-called “hot big bang” is the least understood part of the story,” says Richard Easther, professor of physics at the University of Auckland, who was not involved in the research. “This paper breaks new ground by accurately simulating the postinflationary phase in models with many individual fields and complex kinetic terms. These are extremely challenging numerical simulations, and extend the state of the art for studies of nonlinear dynamics in the very early universe.”

This research was supported, in part, by the U.S. Department of Energy and the National Science Foundation.

LiveScience contributor Tim Childers writes that a new study co-authored by MIT researchers may shed led on what kickstarted the Big Bang by simulating “the critical transition between cosmic inflation and the Big Bang — a period they call ‘reheating.’”