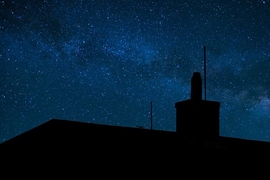 ↓ Download Image
Caption: Physicists from MIT, the University of Vienna, and elsewhere have presented a strong demonstration of quantum entanglement even when vulnerability to the freedom-of-choice loophole is significantly restricted.
Credits: Image: Christine Daniloff/MIT

Caption:
Physicists from MIT, the University of Vienna, and elsewhere have presented a strong demonstration of quantum entanglement even when vulnerability to the freedom-of-choice loophole is significantly restricted.
Credits:
Image: Christine Daniloff/MIT

Quantum entanglement may appear to be closer to science fiction than anything in our physical reality. But according to the laws of quantum mechanics — a branch of physics that describes the world at the scale of atoms and subatomic particles — quantum entanglement, which Einstein once skeptically viewed as “spooky action at a distance,” is, in fact, real.

Imagine two specks of dust at opposite ends of the universe, separated by several billion light years. Quantum theory predicts that, regardless of the vast distance separating them, these two particles can be entangled. That is, any measurement made on one will instantaneously convey information about the outcome of a future measurement on its partner. In that case, the outcomes of measurements on each member of the pair can become highly correlated.

If, instead, the universe behaves as Einstein imagined it should — with particles having their own, definite properties prior to measurement, and with local causes only capable of yielding local effects — then there should be an upper limit to the degree to which measurements on each member of the pair of particles could be correlated. Physicist John Bell quantified that upper limit, now known as “Bell’s inequality,” more than 50 years ago.

In numerous previous experiments, physicists have observed correlations between particles in excess of the limit set by Bell’s inequality, which suggests that they are indeed entangled, just as predicted by quantum theory. But each such test has been subject to various “loopholes,” scenarios that might account for the observed correlations even if the world were not governed by quantum mechanics.

Now, physicists from MIT, the University of Vienna, and elsewhere have addressed a loophole in tests of Bell’s inequality, known as the freedom-of-choice loophole, and have presented a strong demonstration of quantum entanglement even when the vulnerability to this loophole is significantly restricted.

“The real estate left over for the skeptics of quantum mechanics has shrunk considerably,” says David Kaiser, the Germeshausen Professor of the History of Science and professor of physics at MIT. “We haven’t gotten rid of it, but we’ve shrunk it down by 16 orders of magnitude.”

A research team including Kaiser; Alan Guth, the Victor F. Weisskopf Professor of Physics at MIT and a researcher in the Laboratory for Nuclear Science; Andrew Friedman, an MIT research associate; and colleagues from

the University of Vienna and elsewhere has published its results today in the journal Physical Review Letters.

Closing the door on quantum alternatives

The freedom-of-choice loophole refers to the idea that experimenters have total freedom in choosing their experimental setup, from the types of particles to entangle, to the measurements they choose to make on those particles. But what if there were some other factors or hidden variables correlated with the experimental setup, making the results appear to be quantumly entangled, when in fact they were the result of some nonquantum mechanism?

Physicists have attempted to address this loophole with extremely controlled experiments, in which they produce a pair of entangled photons from a single source, then send the photons to two different detectors and measure properties of each photon to determine their degree of correlation, or entanglement. To rule out the possibility that hidden variables may have influenced the results, researchers have used random number generators at each detector to decide what property of each photon to measure, in the split second between when the photon leaves the source and arrives at the detector.

But there is a chance, however slight, that hidden variables, or nonquantum influences, may affect a random number generator before it relays its split-second decision to the photon detector.

“At the heart of quantum entanglement is the high degree of correlations in the outcomes of measurements on these pairs [of particles],” Kaiser says. “But what if a skeptic or critic insisted these correlations weren’t due to these particles acting in a fully quantum mechanical way? We want to address whether there is any other way that those correlations could have snuck in without our having noticed.”

In 2014, Kaiser, Friedman, and their colleague Jason Gallicchio (now a professor at Harvey Mudd College) proposed an experiment to use ancient photons from astronomical sources such as stars or quasars as “cosmic setting generators,” rather than random number generators on Earth, to determine the measurements to be made on each entangled photon. Such cosmic light would be arriving at Earth from objects that are very far away — anywhere from dozens to billions of light years away. Thus, if some hidden variables were to interfere with the randomness of the choice of measurements, they would have had to have set those changes in motion before the time the light left the cosmic source, long before the experiment on Earth was conducted.

In this new paper, the researchers have demonstrated their idea experimentally for the first time. The team, including Professor Anton Zeilinger and his group at the

University of Vienna and the Austrian Academy of Sciences, set up a source to produce highly entangled pairs of photons on the roof of a university laboratory in Vienna. In each experimental run, they shot the entangled photons out in opposite directions, toward detectors located in buildings several city blocks away — the Austrian National Bank and a second university building.

The researchers also set up telescopes at both detector sites and trained them on stars, the closest of which is about 600 light years away, which they had previously determined would send sufficient photons, or starlight, in their direction.

“On those nights, the stars aligned,” Friedman says. “And with bright stars like these, the number of photons coming in can be like a firehose. So we have these very fast detectors that can register detections of cosmic photons on subnanosecond timescales.”

“Out of whack” with Einstein

The team conducted two experiments, with each experimental run lasting only three minutes. In each case, the researchers measured about 100,000 pairs of entangled photons. They found that the polarization measurements of the photon pairs were highly correlated, well in excess of the bound set by Bell’s inequality, in a way that is most easily explained by quantum mechanics.

“We find answers consistent with quantum mechanics to an enormously strong degree, and enormously out of whack with an Einstein-like prediction,” Kaiser says.

The results represent improvements by 16 orders of magnitude over previous efforts to address the freedom-of-choice loophole.

“All previous experiments could have been subject to this weird loophole to account for the results microseconds before each experiment, versus our 600 years,” Kaiser says. “So it’s a difference of a millionth of a second versus 600 years’ worth of seconds — 16 orders of magnitude.”

“This experiment pushes back the latest time at which the conspiracy could have started,” Guth adds. “We’re saying, in order for some crazy mechanism to simulate

quantum mechanics in our experiment, that mechanism had to have been in place 600 years ago to plan for our doing the experiment here today, and to have sent photons of just the right messages to end up reproducing the results of quantum mechanics. So it’s very far-fetched.”

“When photons from the distant stars reach the devices that determine the measurement settings, it is possible that these devices act in some way to change the colors of the photons, in a way that is correlated with the laser producing the entanglement,” says Hall, who was not involved in the work. “This would only require a 10-microsecond-old conspiracy between the devices and the laser. However, the idea that photons don't show their ‘true colors’ when detected would overturn all observational astronomy and basic electromagnetism.”

This research was supported, in part, by the U.S. National Science Foundation and the Austrian Academy of Sciences.

MIT researchers have used starlight to test Einstein’s “spooky action” theory and have presented a strong demonstration of quantum entanglement, reports Calla Cofield for CBS News. Cofield explains that the researchers “measured about 100,000 pairs of entangled photons…and their results suggested that the particles were truly entangled.”

The Atlantic’s Natalie Wolchover writes that MIT physicists have presented a demonstration of quantum entanglement, addressing a loophole in quantum theory. Prof. Andrew Friedman says his team will continue testing the loophole, explaining, “either we close the loophole more…or we see something that could point toward new physics.”